The Threat That Was Cyclone Roanu, and the ‘Success’ That Was Bangladesh's Response 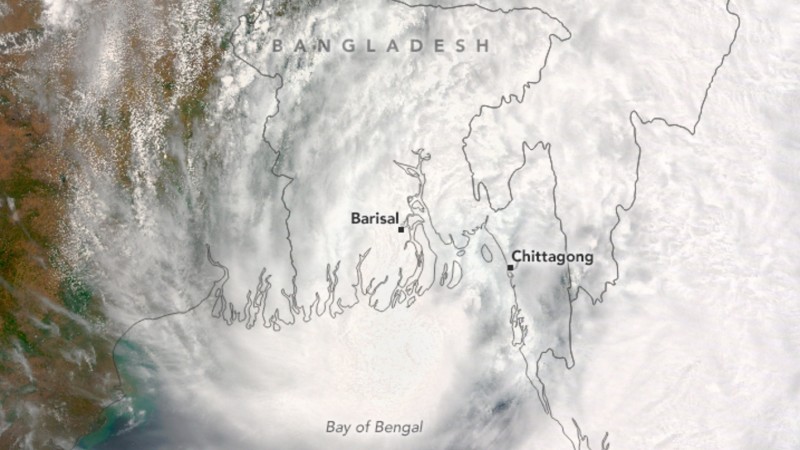 Satellite image of Cyclone Roanu as on May 21, 2016. Image credit NASA Earth Observatory.

Bangladesh has come a long way in disaster preparedness since 1970, when about 500,000 people were killed in the Bhola cyclone. The country has built more than 2,500 cyclone shelters on elevated platforms, which serve the dual role of schools or community centers during normal weather. Early warning systems have been developed, and many volunteers have been trained to help evacuate people to the shelters.

However, preparedness is a constant battle, given the country has been battered by tropical disasters every few years. Tropical Cyclone Roanu was the latest test for Bangladesh.

On 14 May, a low pressure area formed over the Bay of Bengal and consolidated into a tropical depression as it entered Sri Lanka over the east coast. Since then, nearly half a million people have been displaced and 82 people have died in Sri Lanka due to excessive rain and landslides caused by the depression, which became Tropical Cyclone Roanu on 19 May. The Maldives named the cyclone; “roanu” means “coir rope” in Maldivian (Dhivehi).

Roanu also brought torrential rainfall to the Indian states of Tamil Nadu, Andhra Pradesh and Odisha. It drifted on northeastward to finally make landfall in the southeast of Bangladesh.

Bangladesh was better prepared this time. About 2 million people were evacuated before Roanu brought strong winds and rain to Bangladesh's populous coastal communities, killing at least 24 people and displacing about half a million people.

The death toll has been low, if you compare it to Cyclone Sidr in 2007 which claimed 3,447 lives and caused millions of dollars of damage. This time, the disaster management ministry, fire brigade and meteorological department worked together to keep the impact of Roanu to a minimum. However, many houses and roads may be damaged, leaving families without shelter for the oncoming monsoon season.

More on impact of cyclone #Roanu in Banshkhali hardest hit sub-district from @UNDP_BD team who were on the ground pic.twitter.com/5vCmVX7JoT

Some people shared mobile phone videos of the storm on social media, such as this footage from YouTube:

Expat Bangladeshi Naser Imran Hossain described on Facebook how things have changed in his native country:

The greatest wealth that a nation has is it's people, be it ignorant, bigoted, religiously and socially intolerant people- they are the rulers of the land, they are the torchbearers, they are the ones that are best suited to thrive and survive. Even 10 years ago, a cyclone such as Roanu would kill hundreds, devastate thousands of lives- look how situation has change, how the death toll has dwindled, how information technology with improved clarity and awareness has saved hundreds of thousands of lives, giving them a second opportunity to start, anew from the ashes.

However, not everyone had the same thought. Educator Kaberi Gayen warned against downplaying the loss of life from Roanu:

Although it seems like an achievement, 26 lives have been lost due to Roanu. This could be declared a national disaster. But it seems we are accustomed to a large number of deaths.

The process of improving disaster preparedness in Bangladesh isn't over, but it's headed in the right direction, argued Khurshid Alam on the United Nations Development Programme's blog:

Bangladesh’s exposure to cyclones will not lessen – in fact, with climate change we may see the coast battered more often, harder, and in unpredictable ways. In the past decade, Bangladesh has transitioned from disaster management to disaster risk reduction by – among other things – changing the public mindset and government policy, expanding early warning systems and volunteerism, and engaging communities in identifying and addressing local risk.

We must all ask ourselves: how can we help in ways that don’t just alleviate suffering, but support communities to become more resilient for the future? Our work in disaster risk reduction in Bangladesh offers some of the best examples of how our efforts can prevent or reduce crises, not just manage them.