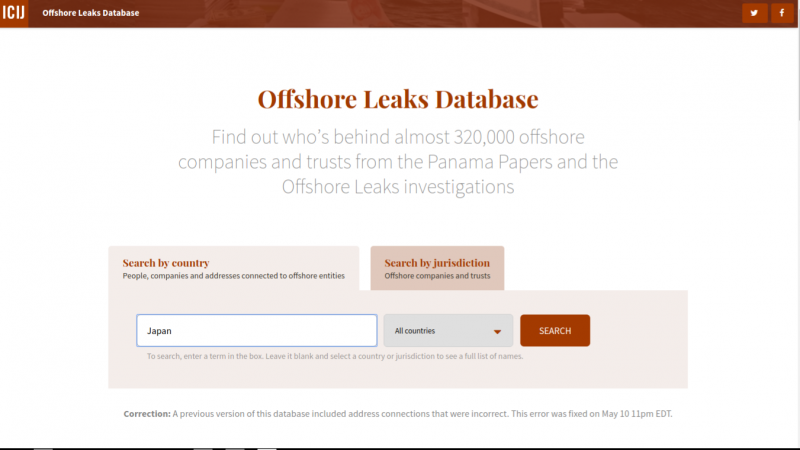 On May 8, 2016 the ICIJ published the names of at least 250 entities and individuals listed in the Panama Papers. Image from Panama Papers website [1].

When the International Consortium of Investigative Journalists (ICIJ) released the names [2] of about 240,000 entities and their shareholders on May 9 [3]as part of the leaked documents known as the Panama Papers [4], there were about 230-240 Japanese names on the list and 20 companies [5].

The Japanese citizens who appear in the leaks include the owner of the UCC beverage company [6], the family that founded SECOM [7], Japan's oldest private security company, and Mikitani Hiroshi [8], CEO and co-founder of Japanese e-commerce giant Rakuten [9].

However, there has been comparatively little significant media coverage and analysis so far in Japan about the Panama Papers or why prominent people, some reportedly connected to the government [10], may be sending assets to tax havens overseas. Neither does the government itself seem interested in digging into the leaks. This, despite rising income disparity in Japan and increasing rates of poverty,

A different money-driven scandal has overshadowed the Panama Papers news in recent days — allegations [11] that the Japanese Olympic Committee may have paid bribes in order to get enough votes to host the 2020 games in Tokyo. Advertising giant Dentsu has been linked to the alleged payments [12].

Before the Olympic bribe story came to lead the headlines, tabloids such as Shuukan Gendai [13] and Nikkan Gendai [14] were the most critical of Japan's media in their treatment of the Panama Papers release, generally treating people named in the documents as “ultra rich celebrities dodging taxes.”

The tweet below shows weekly tabloid Shukan Gendai's table of contents for its May 21, 2016 issue [15] (published on May 9); the Panama Papers dominates the spread:

Daily tabloid Nikkan Gendai emphasized the affluence of those named in the Panama Papers. It posted to Twitter a list of organizations and individuals named in the release side by side with a photo of Rakuten CEO Mikitani Hiroshi:

Nikkan Gendai tweet: Hear what CEOs and company founders exposed by the Panama Papers have to say: https://t.co/tkiznrf7z0 [18] #NikkanGendai Digital [19]

@pacemken's tweet: While rich elites such as Mikitani Hiroshi suck up profits from Japanese citizens, they are also choosing ways to avoid paying taxes.  Don't use Rakuten, use Amazon instead.

Among member countries of the Organisation for Economic Co-operation and Development (OECD), Japan has a relatively high incidence of income inequality [21] (although there is some debate whether or not inequality is rising [22] or falling [23]).

Despite this fact, examining whether or not Japan's richest citizens are paying their fair share is generally not part of the national conversation at the moment.

Sankei Shimbun [24], one of Japan's leading national dailies, emphasized in a tweet the relatively low number of Japanese names included so far among those exposed worldwide in the Panama Papers:

In the days following the May 9 revelations of Japanese names included in the Panama Papers, a common complaint in the media has been that there seems to be very little official interest in investigating whether or not the “ultra rich” in Japan are avoiding taxes.

@Trapelus's tweet: We'll be the laughing stock of the world: “The Abe government and the tax office appear to have zero interest [in investigating tax evasion]. Investigating Panama Papers could be delicate.” If the government doesn't get mad and stays quiet, it's the Japanese people who will have the last laugh.

According to Nikkan Gendai in a story published on May 11 [10], this reluctance may be in part due the fact that some names on the list are connected to the government. The tabloid notes that the sister-in-law of Kato Katsunobu, a junior member of Prime Minister Abe Shinzo's cabinet [30], is the director of a Japanese company named in the Panama Papers.

In the same news story, Nikkan Gendai quotes Takatori Shuichi [31], the parliamentary vice-minister of health, labour and welfare, as stating:

Some names have simply been reported by the media. At this time we're not thinking of conducting any special investigation at this time.

Sankei News suggested that tax avoidance is “old news.” A feature article published on May 16 read:

Sankei article synopsis: “Tax evasion is old news.” When Iceland's prime minister was forced to resign, the true extent of tax havens [around the globe] was uncovered. While repercussions from the Panama Papers continue to reverberate around the globe, one finance expert says “it's nothing new at all.”

There are some who think Japan could be doing more to deal with the problem of tax havens and tax evasion. The Sankei article concludes with a cautionary note by someone else active in Japan's finance industry:

There are those who say Japan is not doing enough in its efforts to tackle tax avoidance. The former chief of an international investment firm says, “Japan has long since ceased to be an international finance center (which attracts Japanese capital). I really think Japan should be investigating all the ways in which capital is being moved offshore from Japan.”