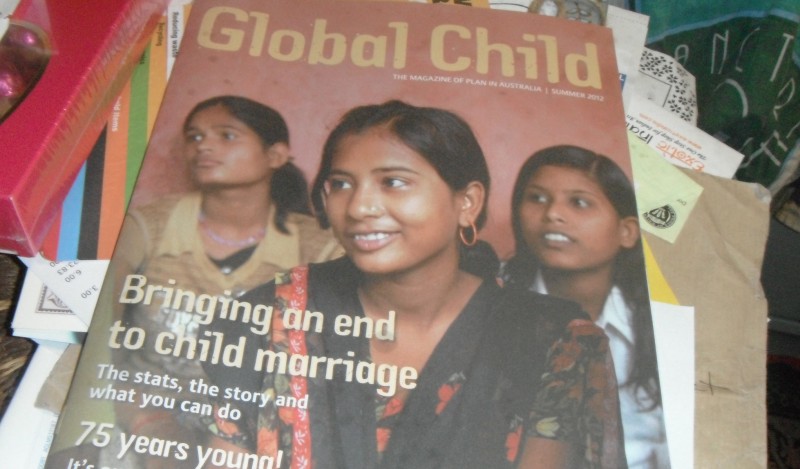 Photo of the Global Child magazine issue about bringing an end to child marriage. Image by flickr user RubyGoes, used under a CC BY 2.0 license.

Trinidad and Tobago is a society of contradictions: just about a year ago, the legal age of sexual consent was raised from 16 to 18, even as an archaic law — the Marriage Act of 1923 — remained on the books, citing the legal age for marriage as 12 for girls and 14 for boys.

Child marriage is sometimes practiced in the country's Muslim and Hindu communities — and certain religious leaders seem intent on holding onto it. Earlier this week, Brother Harrypersad Maharaj, the leader of the Inter-Religious Organisation (IRO), a group that brings together representatives from the country's diverse religious groups and claims to “speak to the Nation on matters of social, moral and religious concern”, said that the state should not amend the Marriage Act because “age did not determine maturity”. Maharaj added that the IRO members’ stance on the matter was unanimous. He was supported by Shouter Baptist Archbishop Barbara Burke, who said that the IRO would vigourously fight governmental interference in the Muslim and Hindu Marriage Acts. She did acknowledge, however, that only 18 representatives of the country's 25 religious denominations were present at the meeting.

The Roman Catholic Archbishop, Joseph Harris, who did not attend, later called forcing children into marriage “legalised statutory rape”. The Anglican bishop also called for a review of the existing marriage legislation, although the popular sports and current affairs website Wired868, which referred to child marriage as “state-sanctioned pedophilia”, thought the bishop was rather wishy-washy on the issue.

In 2011, the country's Central Statistical Office confirmed that more than 8,400 girls and 1,300 boys under 19 were married between 1997-2007. It is worth noting that Trinidad and Tobago is a signatory to the United Nations (UN) Convention on the Rights of the Child (UNCRC), which defines minors as “every human being below the age of 18”. Under the convention, signatories agree to protect children from harm and abuse and look out for their best interests.

In practice, however, the reality is very different. There is an off-colour joke that many people make — “After 12 is lunch” — meaning that once a girl is older than 12, she is no longer off limits sexually. Locally, and in many instances regionally, the reasons for marrying off a child can be economic; they can also be tied to the concept of honour — better to marry off a pregnant teen than have her bring shame to the family. In some cases, a sexual predator may choose to marry the victim as a way of avoiding prosecution. This most recent debate is also taking place against the backdrop of high rates of domestic violence and sexual assault against women, including minors. On May 18, police detained a 36 year-old man after two naked, intoxicated girls were rescued from his vehicle. The parents of the girls confirmed that the man was a friend of the family.

Naturally, there has been a lot of public pressure over the issue; the government has stated that “the time has come for the age of marriage to be the same [as the legal age of sexual consent] to protect a child’s right to enjoy life” and the country's attorney general has promised to make a statement on the matter very soon. The Prime Minister's Office released a statement which may offer a glimpse into the direction the current administration may take on the issue, saying:

The gap between the age for marriage (currently 12, 14 and 16) and the age of consent to penetrative sexual conduct (18 years) has increased since the proclamation of the Children Act, 2012 in May 2015 and must be harmonised.

Early marriage can expose a child […] to: Decreased opportunity for education; Serious health risk such as premature pregnancy and sexual transmitted infections since the child cannot abstain from sex or insist on condoms; High risk due to early pregnancy such as death during delivery, endangering the health of young mother and their babies; and
Increased likelihood of being subjected to gender-based violence.

Moreover, early childhood marriage terminates many of the elements associated with a healthy and enjoyable childhood and creates a cycle of poverty by curtailing the educational opportunities of the children involved.

UN statistics for the period 2002-2012 in Trinidad and Tobago show that the percentage of children who were married by age 15 was 1.8 percent and by 18, 8.1 percent. Interestingly, the dynamic Hindu Women's Organisation supported the government's position, calling for an end to child marriage and for sex education to be taught in schools (something which many religious leaders are also against).

The outcry on social media has been swift. There is an online petition advocating for an end to child marriage in the country, which has already got over 3,000 supporters. On Facebook, netizens were vociferous about their views. Rhoda Bharath said:

On 102.1 IRO President Harrypersad Maharaj says sex education should not be taught in school.
He asked who would be teaching the practicals.
He says that ending child marriage has led to an increase in the divorce rates.
He says the IRO made a unanimous decision. The IRO is the IRO. 17 religious groups of 25 were present at the meeting.
You see the level of ignorance we dealing with?
Child Marriage is Child Abuse!
‪#‎ProtectOurGirls

Many social media users called for the head of the IRO to step down, sharing this meme on Facebook: 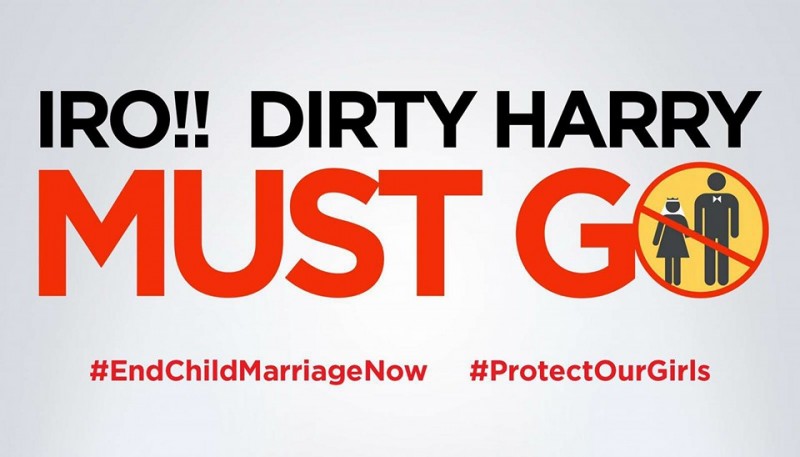 Meme; widely shared on Facebook, which promotes the hashtags being used to advocate for an end to child marriage in Trinidad and Tobago.

In response to statements by certain members of the IRO for the state to stay out of religious matters, social media user Mark Lyndersay said:

Trinidad and Tobago has an awkward history of religious sects being granted state funds to build churches.

Members of the diaspora also weighed in. Cherise d'Abadie, who now lives in the United States, said of the debate:

It's like watching the live birthing of a T&T Tea Party.

Trinidadian Facebook user Charlene Thompson, who lives in Africa, shared a link about Theresa Kachindamoto, the chief of a Malawi tribe who has annulled hundreds of child marriages, saying:

This amazing woman will be speaking this weekend at TEDxLilongwe. Child marriage is a violation of the rights of a child. Please do some research, read and understand just how harmful child marriage is. ‪#‎endchildmarriage‬ ‪#‎childrights‬ ‪#‎notasubjectfordebate‬ ‪#‎betterdandattrinidadandtobago

The satirical website The Late O'Clock News couldn't resist weighing in on the issue, either, posting an outlandish story about the country's controversial children's hospital being repurposed as a nightclub for the IRO to “have a safe space with their child brides”. On Twitter, though, netizens were much more stern about the issue:

And so the public debate about an issue that many feel should not be up for debate, continues.