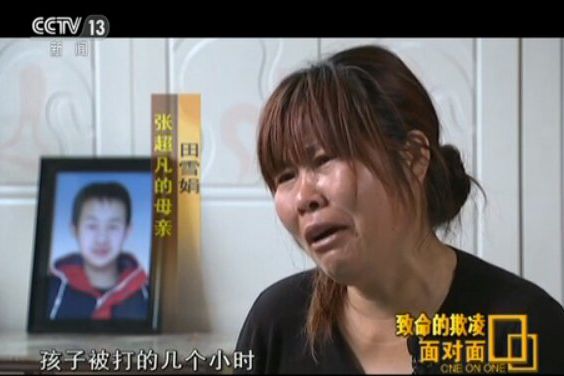 A 15-year-old boy named Zhang Chaofan from Yun Cheng county of Shan Xi province in China was beaten to death on 23 April. The six suspects were his schoolmates.

The police detained the six as part of their investigation. While their results haven't been officially released, the victim’s mother discovered by reading a group chat between members of her son's class that her son had allegedly been a victim of bullying.

She described the case in an interview with state-owned China Central Television. According to her, her son's schoolmates had been extorting money from him. Eventually, he stopped attending school and started working at an Internet cafe. It's there that he was beaten for hours, allegedly by the same schoolmates who had been bullying him. The teenager died of a cardiopulmonary rupture and injuries to the brain.

There have been similar instances of school-age violence that have captured the public's attention in China in the past three months. In Rizhao city, Shandong province, a teenage boy was beaten by five other schoolmates and forced to eat feces in a high school toilet. A few dozen schoolmates witnessed to the incident, cheering for the bullies. Someone videotaped it too and uploaded the footage to the Internet on May 16. The local police told that media that the case was settled privately between the families of those involved without criminal investigation.

On April 25, two videos went viral on social media showing a teenage girl in Anxin being forced to knee down. Another girl dressed in black slaps her on the face, pulls her hair, kicks her and beats her with a rod, forcing her to take off all her clothes. A number of people apparently cheered the violence on and videotaped the incident. Local police arrested two girls, but there haven't been any follow-up reports on any criminal charges being filed.

And on February 17, three Chinese young people attending high school in the United States were sentenced to 13 years, six years and 10 years in prison there for torturing two teenage girls. The bullies forced the two to strip off their clothes, burned their nipples with cigarettes, slapped them across the face and cut their hair.

For many Chinese, the last case showed that authorities don't take teenage violence seriously, especially in comparison to the US. It also drew public attention to the Chinese Minor Protection Law, which was enacted in 2007. The law defines individuals under the age of 18 as minors and says that law enforcement units should adopt the principle of education rather than punishment when dealing with juveniles by reducing or even exempting their liability (Article 54).

Given that authorities in China are not immune to corruption, many believe that the law, rather than protecting juveniles and helping them correct their behavior, has provided a grey area for police to take bribes from the wealthy family members of bullies to escape criminal liability.

In one of the news threads on popular social media platform Weibo about Zhang Chaofan's death, one netizen pointed to the potential problem of corruption in the investigation:

I really wonder what kind of penalties will be imposed on bullies, how their parents react and if they compensate the victim’s family! Even the school is avoiding commenting on the issue. It seems that bullies have very strong backup.

I just want to ask: Who exactly does the Minor Protection Law protect? Who should be protected? How come the law has become an umbrella to protect juveniles, while most of their victims are also underage but are not protected by the Minor Protection Law. What should they rely on to protect themselves [from being harmed by their peers]? Because of this law, they don't even seek justice. What's the use of this law?

We have the Minor Protection Law, but we should also make a Minor Penalty Law, because being a minor can’t always be an excuse to be exempted from punishment and responsibility, look at how many cases are committed by minors.

Under one of the Weibo posts on the poll, people continued to discuss the topic. The most popular comments are those calling for retribution, such as:

Murder with intention. Regardless of the mental status and age of murderer, as he is capable of murder, he should be capable of taking the responsibility.

Some suggested a new law to deal with the school bullying culture:

We can't clean out the weeds by pulling them out one by one. School bullying, teenage violence, all these uncivilized behaviors are rooted in society and family. We should have anti-bullying laws and education and enforce the law onto teachers, parents and students. The involvement of those who are victims of bullying and their protectors is necessary if we want to stop the bullying culture. We can't deal with the situation case by case.

Some also reflected upon the root cause of teenage violence:

This is the price of our country’s fast development: Being left at home, those teenagers lack supervision from their parents, and their violent personalities burst forth after they've been suppressed for a long time. Being large in population can be a good thing, but the unsolved problems of livelihood are not, I hope my lovely homeland can solve such problems and never let such tragedies happen again.