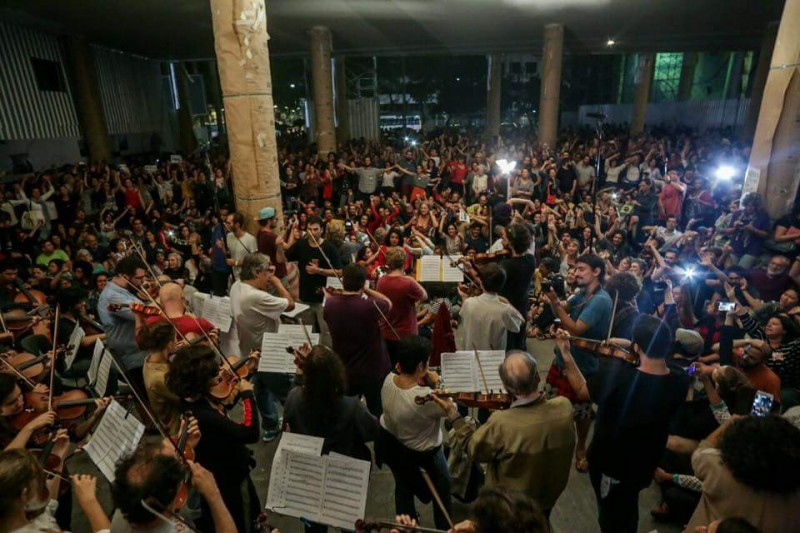 Musicians organized a “Concert for Democracy” at an occupied government building in Rio de Janeiro. Photo: Shared on Facebook

A few weeks ago, a famous Brazilian musician and critic wrote a poignant article pointing out how the events that have recently rocked Brazil lack a soundtrack, a musical dimension as in previous political upheavals in the 1960s and 1970s, when Brazilian popular music was at the center stage.

Well, perhaps no more: Brazilian musicians are occupying and organizing in social media classical concerts in buildings owned by the Ministry of Culture, which was recently extinguished by Brazil's interim president Michel Temer.

Check out this one, which took place in Rio de Janeiro at Palácio Capanema on May 17, in which the late German composer Carl Off's “Carmina Burana” was turned into a chant of “Fora Temer” (Temer Out):

Organizers say a thousand people came to the event. This was the second concert organized by the group — the first was at a public square on May 5, before Dilma Rousseff was impeached and therefore before the Ministry of Culture was dissolved. Therefore the event had a whole significance this time.

Despite its interim character, Michel Temer's government already announced drastic changes in Rousseff's administration, from replacing the entire cabinet ministry to shifts on foreign policy. It has also announced a series of austerity measures like slashing cabinet posts, privatizing and outsourcing public companies, implementing changes in pension laws, and dropping more than a few hints that it wants to make worker protection laws more lax and downsize the public health care system. In his inaugural speech, Temer said he is committed to taming inflation and capping a budget deficit to put the economy back on track.

On May 12, the Brazilian Senate decided in favor of opening an impeachment trial against President Dilma Rousseff for allegedly committing fiscal trickery to hide a growing public deficit. She has to step aside for six months until a final trial, also in the Senate and presided by the president of the Supreme Court, will finally decide whether to unseat her. In a dramatic process that has engulfed Brazilian society as much as its politicians, Brazilians seem divided between those who campaigned for her ousting and those who see the process as a “soft coup”.

The extinction of the Ministry of Culture infuriated the arts world of Brazil. At the moment, artists of all stripes are occupying 18 state buildings owned by the office in 12 cities. Famous Brazilian singers and musicians are putting on concerts in some of them. Another orchestra concert is scheduled in São Paulo on May 25 — this one, however, at the Museum of Art of São Paulo (MASP), a major location of protests for and against the government since 2013.