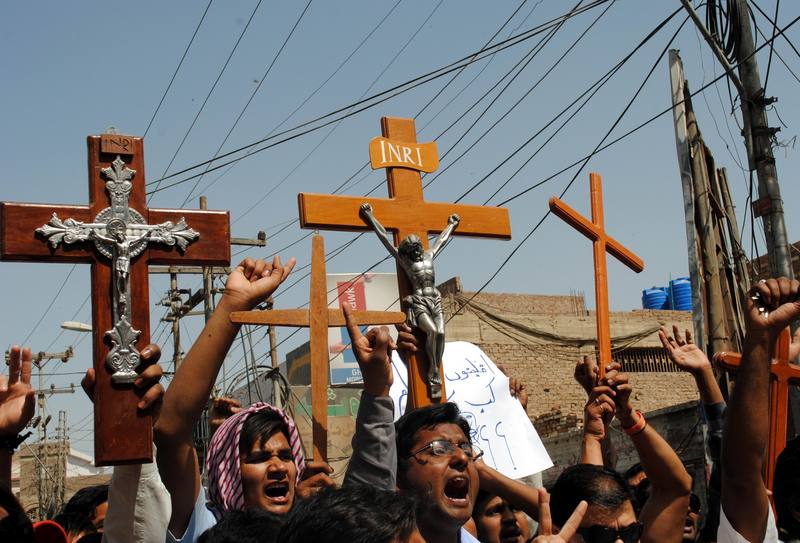 Pakistan's Christian minority shout slogans against an attack on their community members in Lahore in 2013. Image by Rajput Yasir. Copyright Demotix (10/3/2013)

“You either convert to Islam or leave your homes!” This was how a group of Muslim residents led by the local cleric menaced the Christian residents of Chak 144, a village close to the town of Mandi Bahauddin in the Pakistani province of Punjab. The threats came after Imran Masih – a resident of the town and a janitor at the Rural Health Centre in the nearby district town of Mandi Bahauddin – was accused of blasphemy by his colleagues, who thrashed him.

Masih was able to escape with the help of hospital administration, but the group soon turned their anger on the Christian residents of the village, who make up 26 homes in the village.

Masih's story reveals a familiar pattern of mob violence where even an accusation of blasphemy is too often enough to get one killed. Officially in Pakistan, the crime of blasphemy is punishable by death. What is now known as Pakistan's penal code Section 295, the notorious blasphemy law was first introduced in pre-partition India in 1860. In 1986, it was introduced into the constitution under the dictatorship of General Zia Ul Haq. Since then, according to data collected by Dawn News, about 51 people accused of blasphemy were murdered even before their trials were over.

Christians in Pakistan represent a religious minority in a largely Muslim country. According to data provided to National Commission for Justice and Peace to the BBC, a total of 633 Muslims, 494 Ahmedis, 187 Christians and 21 Hindus have been accused under various clauses of the blasphemy law since 1987.

In many instances, riots target other residents of the community, burning down homes and forcing resident to flee. In 2009, six Christians were burnt alive and 60 houses torched by an organised mob in the city of Gojra. The violence erupted after a Quran was allegedly desecrated during a wedding ceremony. 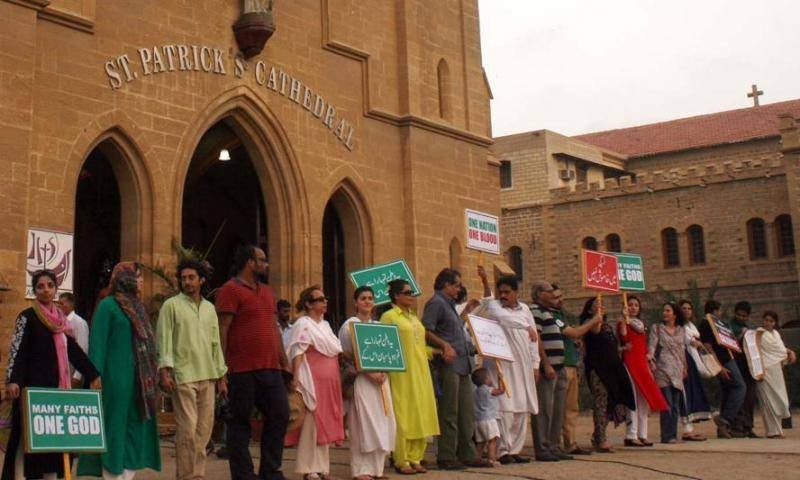 Protesters from a human chain around St Patrick's Cathedral in solidarity with the Christian community after the 2013 attack. Photo via Pakistan For All Facebook Page

A 318-page report, released four years after the attack, indicated that the authorities could have prevented the deadly riots. According to the report, which was compiled by a judge, the violence was organised by banned extremist outfit Sipah-e-Sahaba and authorities knew about it, but failed to act.

Again in 2013, 125 houses of Christians were burnt in Lahore after a resident, Sawan Masih, was accused of committing blasphemy, which triggered an attack against the Christian community.

‘Arrest those who are whipping up hatred and plotting sectarian violence’

Fearing for their lives, Imran Masih and his family have gone in hiding, but the Christian community in Chak 144 isn't out of the clear yet. The local cleric has reportedly demanded in his daily and weekly sermons that the Christians must hand over Masih to the Muslims so they can burn him alive in front of the area's church.

Writing for news site The Nation, Shamila Ghyas delved into more detail about the blasphemy accusation against Masih:

What could possibly have Imran Masih done that they want to kill him so brutally and to punish the whole village as well?

He made a video on his cell phone of a wedding he had attended of a Muslim colleague’s daughter. When he went back to work as a janitor at the local Health Care Centre, a colleague asked him to show him the clip. Imran gave him the phone and left to finish his work.

After his return, he saw his phone in the hands of another Muslim man Bilal who was playing a YouTube video of Pastor Sami Samson, widely known to be critical of Islam. He was showing the video to others claiming that Imran Masih watches such blasphemous material. It would be pertinent to mention here that Imran was the only Christian who worked at the Centre.

Reema Abbasi, a Pakistani journalist who is following the plight of Christians in Mandi Bahauddin closely, sounded the alarm about the deteriorating situation there:

The mainstream media has been almost silent about the issue, but an online campaign started by civil society activists is picking up momentum. Bol Platoon, a community blog that aims to revive rationalism, pluralism and tolerance, tweeted a call for action:

Muslims need to save Christians of #MandiBahauddin where Christians face chill wind as extremists threaten them pic.twitter.com/xZPztXGZ6S

Pakistan For All, a citizen's resistance network “fighting religious and state fascism,” is sharing updates and encouraging Pakistanis to contact local politicians and law enforcement to protect Christians.

On their Facebook page, Pakistan For All also shared reports from the town about the situation on the ground. Muslim residents are boycotting Christian residents’ businesses, and things are “very tense”. The organisation stressed the seriousness of what's unfolding there and called on police to act:

Let us be clear, there is no ‘peace’ to be made here. There are no two aggrieved sides. Religious extremists are trying to engineer a pogrom and they must not be allowed to succeed. Our efforts are already bearing fruit and as Police and local authorities have been forced to take the matter seriously. We will not be pacified by statements like things are ‘under control’. We do not simply want the Police to ‘defuse’ the incident, we want them to arrest those who are whipping up hatred and plotting sectarian violence.

Citizen action is thankfully making a difference, Pakistan For All said in a later post:

PFA activists on the ground in ‪#‎MandiBahauddin‬ tell us that the citizens social media campaign has had a tremendous effect. The local authorities are under pressure, their phones have been ringing off the hook. The [Inspector General] Punjab Mushtaq Sukhera has also taken notice. Yesterday a force of 300 armed police were deployed outside a mosque in the town to prevent any violent incident after Friday prayers. But the situation is not “under control” as the Police would like us to believe.

Bilawal Bhutto, chairman of one of the country's largest political parties, the Pakistan People's Party, has expressed his concern over the volatile situation in the village. Meanwhile, the left-wing Awami Workers Party has been vocal on the issue, and even started a Change.org petition saying it will launch a series of protest “if anything happens to the already distressed Christian community”.

As the threat of violence looms large, citizens aren't giving up just yet.