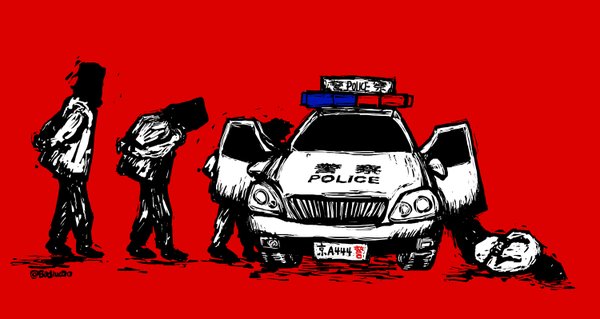 Badiucao's political cartoon on the death of Lei Yang.

A young environmentalist whose wife just gave birth to their first child in April died in police custody after being arrested in a crackdown on prostitution in Beijing's Chang Ping district on May 7. Since the man's passing, police have aggressively sought to remind the public that the man allegedly solicited the services of a sex worker — and thereby avoid answering tough questions about the circumstances that led to his death.

The 29-year-old man's name was Lei Yang. He graduated from Renmin University and worked for the China Association of Circular Economy, a government-affiliated environmental organization. Law enforcement say Lei was apprehended outside a foot massage parlor and presented to a two-hundred-yuan receipt (about 30 US dollars) signed by a prostitute as proof that his arrest was justified.

His relatives, however, maintain Lei was on his way to the airport to pick up friends and somehow was caught up in the police raid, ending up dead just one hour after leaving home.

Police say Lei resisted arrest and died from a heart attack. Passersby heard him crying for help during the arrest, and his body showed physical injuries according to the hospital. The police claimed that the injuries was resulted of his jumping off the police vehicle. All nearby surveillance cameras in the area weren't functioning like normal at the time, and there were no cameras in the police vehicle.

The Chang Ping district police department has tried to influence public opinion on the case, appearing to hire a large number of online commenters to spread the idea that Lei does not deserve sympathy. These online commenters all listed on their user profiles that they were employees of the “Ideal Office” (it's not clear if this company really exists). China Digital Times screen-captured a sample of the posts they published on popular social media platform Weibo:

If he really jumped out of the police vehicle, he's to blame for his own death. Soliciting prostitution is an unforgivable act.

He brought the consequences upon himself. Nothing more can be said.

Run away after prostitution. Gosh, he shouldn't do that in the first place.

If I were the wife of this man, I should be tortured to death. If he had not had the accident, would she have forgiven his act? That kind of psychological torture is really something.

Lei had ruined his life. For what?

‘This is a cover-up’

Of course, many Chinese weren't buying it. Alumni of the university Lei attended spoke out in written petition against police abusing their power.

Many netizens joked about the prostitute receipt, which had the information of Lei Yang's danwei (“work unit”). It read:

A Chang Ping district resident commented on the receipt on Weibo (screen-captured by Wang Yi):

This is a cover-up. To prove that Lei Yang was soliciting prostitution, a fake receipt was made […] Who would ask for a receipt for a prostitution fee? Spread this.

Twitter user Wang Yi reposted an image of the receipt and added her view to the above popular Weibo post from Chang Ping resident:

I have never over-estimated the IQ of the emperor's servants, but this is really an extreme case. While Lei Yang had to make time for prostitution when traveling to the airport, he had the time to tell the prostitute his name and work unit. Was he planning to ask for reimbursement of the prostitution fee? A netizen commented: the objective was too rushed and leaders making such a minor mistake is understandable…

Some male netizens shared their stories of having forced by police to confess to the crime of soliciting a sex worker allegedly because local law enforcement depend on those fines to fund the hire of temporary employees.

The case also seemed to soften some women's view of prostitution, as one female Weibo user wrote (reposted to Twitter by Andy Yeung):

A female Weiboer wrote: It's time to build a trusting relationship. I told my husband, prostitution is not a big deal. If you were caught, I wouldn't divorce you. I would help you to keep the secret and pay the fine for you. If you were fired because of this, I would support you financially. The most important thing is to keep alive. — many wives have changed their attitude towards prostitution after Lei Yang's incident.

In the past, Chinese authorities have used the soliciting prostitution charge as a political tactic to crack down on human rights activists such as anti-graft activist Ou Shaokun and opinion leaders such as Charles Xue.

While Lei Yang never spoke up publicly against the injustices faced by social activists, many drew parallels between those cases and Lei's. Political cartoonist Badiucao warned that until the political system changes, more will fall victim to the police's abuse of power:

#BadiucaoComic #TheDeathOfLeiYang The institution of violent abuse of power has become a meat grinder. This is the root cause of Lei Yang's death. The black hoods can be put on everyone's head. Whether you are poor or rich, young or old, illiterate or a public intellectual. Eventually, you could end up like Yang Jia [who was executed in 2008 for killing six Shanghai cops in a police station]. There's no other choice, even though you may keep searching for one in the “China Dream.”