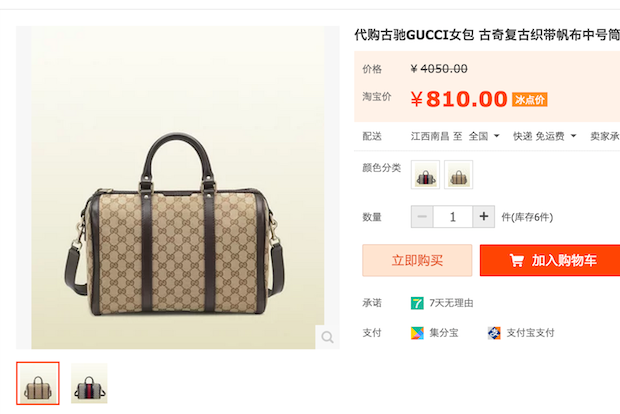 A counterfeit Gucci bag for sale on Tao bao. Screen capture in May 2015 via Jing Daily

The International Anti-Counterfeiting Coalition (IACC) has decided to suspend Alibaba's membership of the group less than a month after it was admitted, after a number of members, including Gucci, Michael Kors and Tiffany, quit the group in protest at the Chinese Internet giant's  entry.

The anti-counterfeiting group has more than 250 members, the majority of which are prominent global brands.

Last month, the group decided to extend membership to intermediaries in order to develop solutions to combat counterfeit production and distribution.

Alibaba became the first intermediary company to join under the new membership system, yet its membership proved short lived.

Other members of the group were unhappy about the presence of the new Chinese member as Alibaba runs the world's largest e-commerce platform, Taobao which in turn is often criticized for hosting a large number of online shops that sell counterfeit products.

Brands like Gucci and Michael Kors reacted by quitting the group almost immediately, with the latter calling Alibaba “our most dangerous and damaging adversary“.

More members were prepared to walk out according to an email sent to the group's board members.

The decision to suspend Alibaba's membership was announced on May 13 after Associate Press revealed IACC's President Robert Barchiesi was actually a holder of Alibaba stock, a vested interest he had not disclosed to other board members.

In one of the most popular news threads on Weibo, many said Alibaba had got its just deserts:

How come the group would accept Alibaba's membership in the first place? To humiliate Alibaba?

Of the heavenly kingdom's glory — BAT [Baidu, Alibaba and Tencent are the three biggest Internet giants in China] — one has become the king of liars [referring to Baidu search promotion Ads scandal], one is the world's king of counterfeits [referring to Alibaba], the other is a well-recognised king of copycatting.

There are more counterfeits than genuine products in Alibaba. Most are high-quality counterfeits. This kind of company would be subjected to huge fines and bankrupted in countries that uphold the rule of law.

If Alibaba is genuine about fighting counterfeiting, how many shops in Tmall (a platform for selling high quality products) will be forced to close? How much profit will it lose?

Some reacted with sarcasm:

Stay at home. If your counterfeits are high quality and cheap, Chinese people will support you and no one will disqualify you.

The point is, even if [Alibaba founder] Jack Ma wanted to sell genuine products, very few factories would be capable of manufacturing them.

Operating under the protection afforded to it by China's Great Firewall, however, Alibaba will continue to lead e-commerce in China, as Wang Ruo, a former executive manager at Taobao stressed:

Concerning the ousting of Alibaba from the anti-counterfeiting group, here is a sharp quote from a friend: “Despite Alibaba managing to enter IACC, it could not escape its notoriety for selling counterfeits. Despite being booted out by the group, it is still number one in e-commerce.”

In other words, no changes are expected.