Lower Castes in India Are Still Clearing Human Waste With Their Bare Hands, Despite Laws Against It 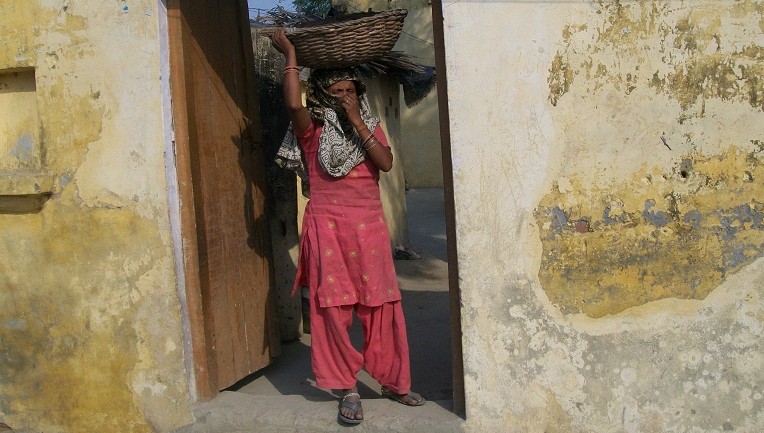 Manual scavenging is illegal in India but the practice continues to exist. This woman in the Moradabad district of Uttar Pradesh carries human waste for disposal. Image courtesy UNICEF India.

About one billion people, or 15 percent of the global population, practice open defecation and a large portion of them are in India. Much of the poor hygiene practiced in India is deeply influenced by the country's discriminatory caste system. Due to the lack of proper drainage systems, manual scavenging (cleaning human waste by hand) was designated to the lowest caste Dalits, earning them the name “the untouchables”. After decades of campaigning and improving sanitation systems, in 2013 Indian lawmakers passed the Prohibition of Employment of Manual Scavengers and their Rehabilitation Act, criminalising the practice of employing individuals to clean manually, carry, dispose of, or handle human excreta from dry latrines, open drains, or pits and sewers.

According to a report by the Asian Human Rights Commission in 2015, however, many rural households in India continue to engage in manual scavenging, finding that the continued practice has less to do with poverty than with enduring caste-based discrimination.

Manual scavengers are among the most excluded and exploited communities among the Dalits. They are considered to be the lowest in Hindu caste hierarchy and, therefore, suffer multiple forms of discrimination and social exclusion at the hand of caste Hindus and the state's functionaries. They are found in almost all cities of India—where they sweep the streets and manually engage in carrying night-soil. Women from these communities are the worst victims as they constitute more than eighty per cent of workforce of manual scavengers. Apart from the social stigma that they suffer, their work is low-paid. Further, it causes various health problems, those who engage in this work being exposed to the most virulent forms of viral and bacterial infections that affect their skin, eyes, limbs, respiratory and gastrointestinal systems.

A ground report produced by the international media and human rights organisation Video Volunteers reveals that the practice continues unabated in Gujarat, which earlier declared itself free from manual scavenging.

In the video above uploaded by Video Volunteers, three young manual scavengers on Surendranagar Street in Dhangadra town, in Gujarat, can be seen entering chest-deep into a sewer without any protective gear: no gloves, no masks, and no machines. They are unaware that the Dhangadra Municipality, their employer, is legally bound to provide them with safety gear.

As per the Video Volunteers report:

When visual evidence was presented to Charuben Mori, the Chief Executive Officer of the Dhangadra Municipality, she refused to take cognizance of it and said, “We don’t endorse or promote illegal practices such as manual scavenging.” On being asked why safai karmacharis weren’t provided safety gear, Mori refused to take responsibility and instead, shifted the blame onto the contractors saying,

“These are not our employees so we do not know about their working conditions. They are employed by the contractors”. The law is clear that a person cannot be directly or indirectly (under contract) employed for unprotected cleaning of sewers.

Activists have launched a petition urging the government of Gujarat to take punitive action against the officials responsible.