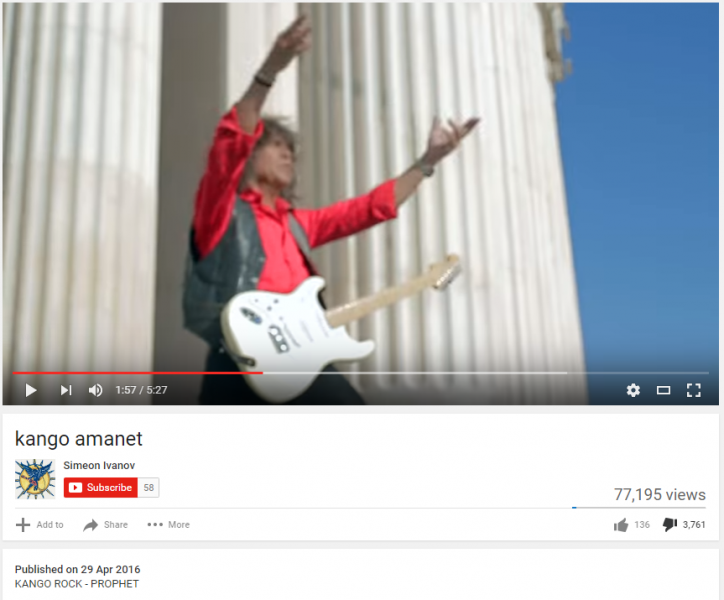 Screenshot of Macedonia taxpayer's subsidized video clip Amanet by Simeon Ivanov-Kango, showing the number of likes and dislikes on May 12, 2016.

Macedonian citizens have been enraged to learn that their government subsidizes and publishes rock music using taxpayer money. The government is financing the production of various kinds of domestic pop music with about 200,000 euros (roughly $228,000) per year, handing out several thousands of euros at a time to different artists to produce songs and music videos.

In addition to requiring the music to be suitable to critics have described as a right-wing ideology, recipients of government grants have to qualify as bona fide “stars,” which requires “proving” this status by informing a state committee of how many albums they've released, concerts they've performed, and so on. The competition is managed by the Public Broadcasting Service MRTV, through a special commission.

Whistleblowing former commission member Kosta Karev blogged that applicants were not actually required to provide evidence for these claims. He also wrote:

I am really disturbed by all these unprincipled deals, calculations made at others’ expense, and various interpersonal relations that affect all facets of our society, and also the work of the commission. Yes, you can blame our mentality for that. But in this particular case, the guilt belongs to legal loopholes and inconsistencies in the Law for Support of Domestic Music Production, and its bad implementation.

Another former committee member, Simeon Ivanov-Kango, received 9,000 euros in subsidies to produce two songs. When one of his songs was published on YouTube, there was a public uproar, citing the video's low quality, as well as the potential of the government's project to encourage self-censorship among artists and other public figures.

Kango is a middle-aged musician who never enjoyed much commercial success either domestically or abroad, but he's been making music since the 1980s, imitating Jimi Hendrix and claiming to be a “rock prophet.” He applied and won in the “star” category.

Within a day, Kango's video on YouTube, titled  “Amanet” (an archaic word meaning “Legacy” or “Testament”), attracted more than 1,000 “dislikes” by users. Within two weeks, the number of “dislikes” grew to almost 4,000, with only over a hundred “likes.”

The song Amanet basically has no rhyme, and its lyrics are basically a list of keywords considered to be “patriotic” that often appear in government propaganda. The author and performer has been a long-time supporter of the ruling party. The song is about his syncretistic beliefs: a mix of a Balkan nationalism and mysticism, combining paganism and Christianity, with revelations about the importance of Macedonia in human history.

Macedonian citizens voiced their dissatisfaction on online social networks. The video was filmed at the epicenter of the Skopje 2014 project, which imposed “baroque” and neoclassicist architecture on the center of Skopje, adhering to the former prime minister's wish to make the city “more European.” Referring to this, Twitter user Ann Bannann wrote:

A satirical article on Mojo.mk listed the song's various winning qualities, from improving the self-confidence of young musicians (“You can't make anything worse”) to promoting certain health benefits (like using the song as a remedy for constipation).