Where Is Zeenat Shahzadi? Missing Journalist Is Suspected Victim of Pakistan's Enforced Disappearances 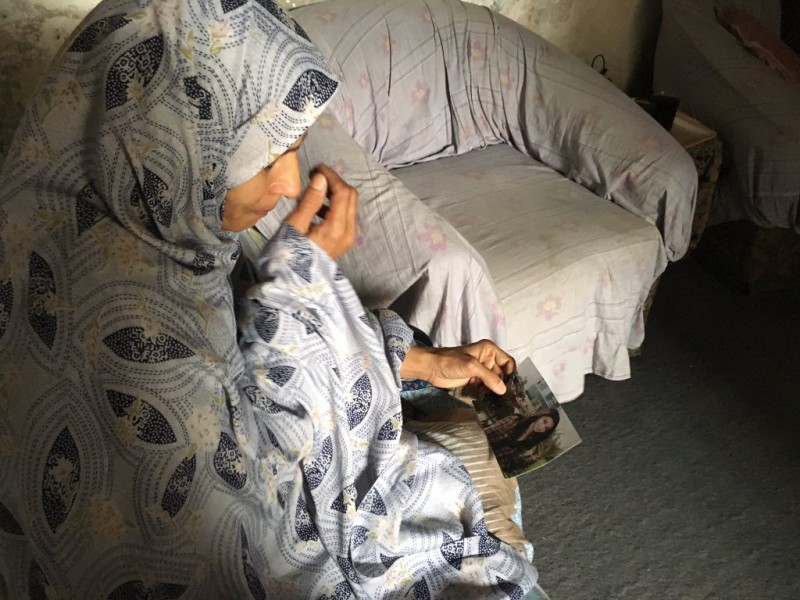 Kaneez Bibi looks at a photo of her missing daughter Zeenat Shahzadi. Photo by BBC reporter Saba Eitizaz, who first broke the story. Used with permission.

Nine months have passed since freelance reporter Zeenat Shahzadi was last seen, abducted on a Lahore street by Pakistani security agents, her family alleges. At the time, Shahzadi had been working on the case of Hamid Ansari, an Indian man who went missing in Pakistan in November 2012. She helped to file a missing person's petition and to convince a government commission on enforced disappearances to investigate.

Shahzadi was supposed to give testimony on the matter a few days after she went missing. Later, the country's army admitted that Ansari was in their custody and convicted him of espionage by a court martial.

Pakistan's security agencies have long faced accusations of detaining individuals under the guise of counter-terrorism, more recently under the Protection of Pakistan Ordinance, 2013 (PPO). The PPO, declared to be “the most draconian anti-terrorism law” by the International Commission of Jurists (ICJ), allows the government to withhold information on the location of detainees, as well as where and why they were detained, for any “reasonable cause”.

In a lot of cases, the missing turn up dead. According to the Human Rights Watch, between 2009 and 2015 authorities recovered the bodies of 4,557 suspected victims of enforced disappearance.

Most of these cases involve men or boys, and Shahzadi is considered the first such instance of a female journalist being disappeared. Her story has stirred public outcry seeking justice for her family and for other victims of enforced disappearances. A recent BBC article by Saba Eitizaz, who has followed the situation closely, renewed interest in the case. Since Shahzadi went missing, her family's grief has multiplied — her 17-year-old brother, Saddam Hussain, killed himself in March.

On Twitter, Saqlain Imam, a reporter with the BBC, asked if Chief of Army Staff General Raheel Sharif would help locate Shahzadi:

Can Gen Raheel Sharif do some thing for her return? @AsimBajwaISPR
Zeenat: Fears for missing #Pakistan reporter https://t.co/skCxKZwh53

Veteran journalist Matiullah Jan, who reports extensively on “enforced disappearances”, spoke about the Supreme Court's role in the issue:

Why you have to pay the price in #Pakistan when you raise your voice on any injustice?? #ZeenatShahzadi #FreeZeenat

Netizens gave their well wishes to Shahzadi's family, especially her mother, and hoped there would be a happy ending to the story.

I hope Zeenat Shahzadi is safe and sound wherever she may. She's been reporting about the missing people & have gone missing, herself.

On a Facebook page called Factual Discourse, Junaid Malik shared his thoughts on the impunity often enjoyed by military forces:

Hamid Ansari is an Indian and Zeenat is Pakistani. Hamid committed no crime, did he? And this girl Zeenat was simply working on his case. She is just an ordinary girl.
Not sure where they are and what they are going through. Both just disappeared.
No one has the power to do anything. Military enjoys a special impunity in this country and no authority can challenge the agencies.
Question:
Is Human life and that of an ordinary citizen, so cheap and so valueless in Pakistan? Are there any Human rights being followed in Pakistan?

On the same thread Nazzia Shafiq Momina spoke of her fears when it comes to enforced disappearances:

It is getting to the point when anyone of us can disappear for seeking or speaking the truth and then they will keep arresting random militants in the name of my disappearance or murder. And the public will clap wah wah wah Rangers kei aaney sei kitna sukoon hei [wow wow wow it's so peaceful since the Rangers paramilitary force took over]. All bull shit

Nearly a year on, and Shahzadi's whereabouts remain a mystery. Human rights activists and her family strongly believe that security agencies had a role to play in her disappearance. However, much like the hundreds of cases before her, there's no clarity as to who is responsible and whether the family will ever learn if she's even alive. For now, though her mother Kaneez Bibi longs for closure, there's none to be had.