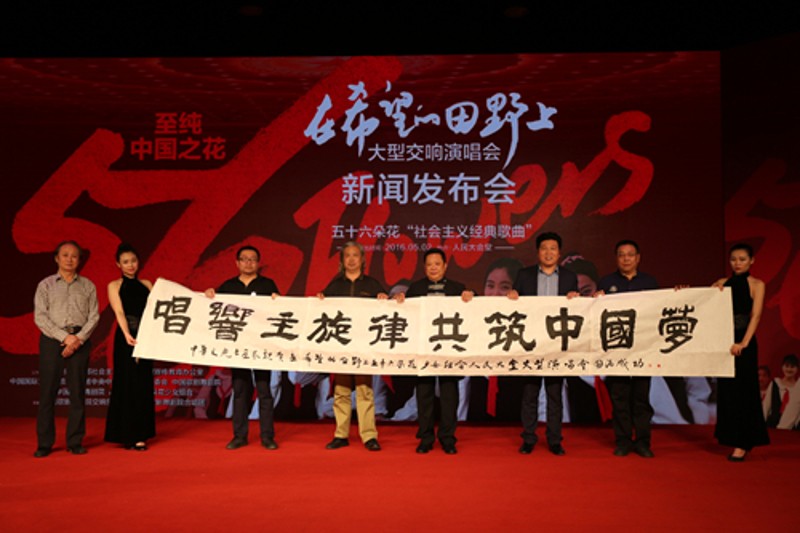 During the concert's press conference, the organizers hold a banner which says: Sing the “main theme” out loud, construct the China dream. This photo was eventually deleted from Chinese state-owned Xinhua's site.

A recent concert by an all-girl band, 56 Flowers, featuring “red songs” from the era of Mao Zedong's rule has received backlash on social media and from within the Chinese Communist Party. The reason?

The performance took place two weeks before the 50th anniversary of Mao's Cultural Revolution and was interpreted as a dangerous revival of his personality cult, which bolstered the bloody political purge to begin with.

Four days after the red concert, as criticism was rolling in, two of the organizations involved announced that they had been tricked into lending their support to the performance, leaving Chinese wondering if authorities were trying to cover up their poor judgment in hindsight or were truly that gullible.

The 56 Flowers’ show on May 2 at the Great Hall of the People, an important political arena, kicked off with the famous red song “Sailing the Seas Depends on the Helmsman,” which was written in 1964 and became very popular among red guards during the Cultural Revolution.

The women performed against a backdrop of propaganda from the time — political posters featuring Lei Fung, a soldier who often appeared in Mao-era propaganda, and Mao depicted a red, as well as the slogan “People of the world, unite and defeat the US aggressors and all their running dogs.”

Mao's legacy in China is complex. The revolutionary, who served as chairman of the Chinese Communist Party from 1949 until his death in 1976, is considered the founding father of the People's Republic of China. In 1981, however, party officials declared his Cultural Revolution to be “the most severe setback” that the country had experienced since its founding.

Some fear his authoritarian style has been reborn in current Chinese President Xi Jinping, who has made ambitious moves to consolidate his leadership within the party and in the army. Xi's wife Peng Liyuan is a singer, and one of her songs, the 1980 track “On the Field of Hope,” just so happened to be the title of the 56 Flowers’ controversial concert.

With the criticism piling on, one of the concert's sponsors, the China National Opera and Dance Drama Theater, released a statement on May 6 saying that they had been misled to believe that the concert was backed by “the Office for the Promotion of Socialism Core Values under the Central Propaganda Department”, which does not exist. Other sponsors of the concert were the China International Cultural Exchange Center and China Future Star, a singing contest organized by the China Communist Youth League.

The Beijing Western District Cultural Committee, a party organ which was in charge of screening the program of the concert, also condemned the addition of the above non-existent co-host. Neither the theater nor the committee specified who was responsible for including the fake office as a sponsor.

Qiao Mu, a political commentator, argued that without the backing of top officials, the concert could never have taken place and that the statement was meant to divert the public attention:

In the opening of the concert, a number of department heads from the Central Propaganda Bureau gave speeches claiming that they would launch an education platform to serve the public. And this is not official? The concert took place in the Great Hall of People, rent and tickets are not the venue's major concern. […] For this kind of political performance, without the approval of high-ranking authorities, the concert could not have gone with such a theme and performed at that venue. And the application would not have been approved by lower-ranking authorities.

We could deduce that the performance either had the approval of the top authorities to advocate the idea of unity within the core [leadership], or the initiative was taken from below to show their loyalty. It is also likely that both parties could have naturally worked together.

But they failed to see that time has passed. People reacted against the revival of the Cultural Revolution and the cult of personality. Even within the party, some have spoken out against it. Moreover, the denunciation of the Cultural Revolution and cult of personality was adopted as a party resolution and appears in [party members’] guideline to political life. In response to the situation, [those responsible] have just created an excuse to cool things down.

The manager of 56 Flowers, Chen Guang, responded to the controversy by stressing that he had not engaged in any fraud nor misled anyone.

The all-girl pop group was launched in May 2015 with great fanfare in China. The band's name comes from a patriotic song called “Love My China” in which 56 flowers represent 56 ethnic groups in China. The band's mission aligns to President Xi's wish for Chinese to “advocate positive energy” by “integrating patriotism with popular culture.”

Major state-affiliated news agencies published feature reports after the concert, praising its success. Quoting from the China National Opera and Dance Drama Theater, Xinhua News wrote in its concert review (a backup of the post, which has since been deleted, is available via China Digital Times) :

This red song, party-praising concert is an innovative review of the “main theme” of art, in line with what Party Chief Secretary Xi Jinping told us — that artists should hold the banner of core socialist values high. We have to reflect our core socialist values in art in lively and vivid ways.

After the statements from the two party organizations were released, all the media's praising reviews were taken down. As China has a strict censorship regime, this further adds to the intrigue: Which authorities green-lighted the performance?

On popular social media platform Weibo, Chang Honghai is among the Chinese netizens asking that question:

It is impossible for 56 Flowers to perform at the Great Hall of the People without prior approval from central authorities […] The run-down has to be approved, this is a pre-existing cultural system. Which means this red song concert had to have been approved by the government. But exactly who gave support to this red song concert? Why don't you guess: the manager of the Great Hall? The head of Central Propaganda? The head of the Ministry of Culture? The manager of the China Association of Performing Arts?

Whether it was a scam or a cover-up of a decision that backfired, the situation doesn't reflect kindly on the Chinese state. If the concert organizers really were tricked, how come media outlets, which are all under the party's leadership, were not aware of the fact that one of the major hosts is a fake party organization? The fact that someone was capable of fooling so many authorities also says something about today's China — and it's not good.