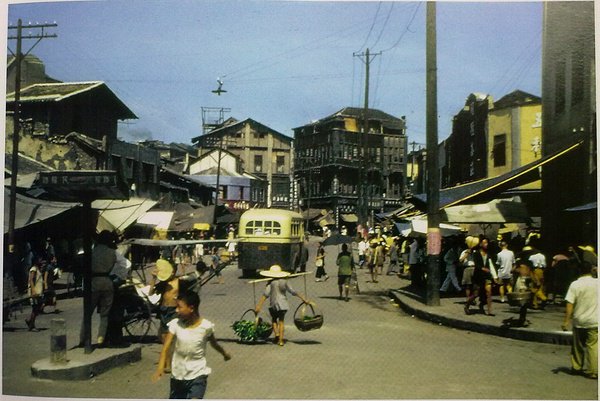 Chungking, China's wartime capital during 1937-1945, here in 1944 and in colour. Posted by Twitter user @chinarhyming.

Two Twitter accounts are a constant source of insightful photographs of World War II in Asia.

The account China in WW2 focuses on the war in China that started in September 1931 with Japan's annexation of Manchuria. Another Twitter account, WW2 in Asia, is dedicated to “Livetweeting about history, exactly 80 years after it happened” until 2025 and the eightieth anniversary of the end of the war.

According to its profile, China in WW2 provides “news about the 1931-1945 Sino-Japanese war and the birth of modern Asia.” The account is managed by Peter Harmsen, author of the books ‘Shanghai 1937‘ and ‘Nanjing 1937‘.

The Twitter account provides images of a long war that has largely been forgotten in both Japan and in the West, despite lasting nearly 15 years until Japan's defeat in 1945.

The images provide a fascinating glimpse into the world of the 1930s, and point out how, for much of the decade, Japan interacted and collaborated with Western powers while at war in China.

While many of the images appear to be posed, there are some stunning documentary finds:

Included are images used for propaganda:

As well as shots that speak to Japan's largely forgotten foray into colonizing northeast China in the 1930s:

What happened to the Japanese stranded in #China at the end of #WW2? Read it here https://t.co/NcMhShhiQu #Japan pic.twitter.com/Rvklf3BXrA

Twitter account WW2 in Asia aims to provide a live-tweet retrospective of the war in Asia. It's also an excellent source of rare and surprising photos.

Much of the appeal of the microblog is that photos are tweeted chronologically in “real-time”; right now the account is tweeting the events of May 1936:

May 11, 1936: New Japanese law to make disclosure of industrial information an act of treason pic.twitter.com/qImZk2dleO

The tweets provide some useful context for what was happening as Asia marched towards war:

May 8, 1936: Speech in Japan's parliament denouncing Army's role in politics is received with thunderous applause pic.twitter.com/nCwiqWXAQ8

There are also some great finds documenting existing Japanese colonialism in Northeast Asia prior to the official start of hostilities in 1941.

May 5, 1936: Japan and territories under its control lead world in per capita drug use, League of Nations data show pic.twitter.com/HVPzCAAodf

Another somewhat depressing but compelling feature of the Twitter account is that it demonstrates that the world was not taken completely by surprise by the eruption of war: