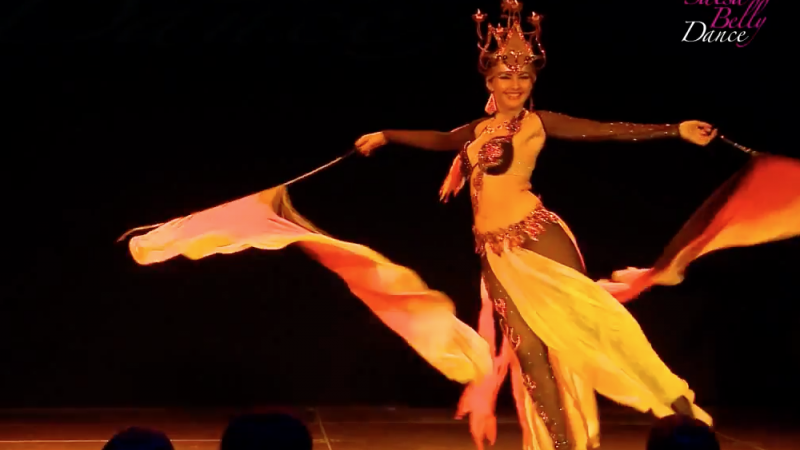 Salsa-belly dancer Yulduz Starkova combines styles in front of an audience. Screenshot taken from a video recorded at the Gala Concert in Moscow.

Belly dancing has its roots in the Middle East, while salsa grew out of Latin American traditions. When you combine them, you get a high energy, hip-swaying fusion dance form that bridges the two regions of the world, separated by thousands of kilometers of land and sea.

The Internet is full of belly dance-salsa mashups. One example is below, a workshop from the Discover Dance studio in the UK:

Or this performance by belly dancer Lana Terra and the group Rumba Havana at a concert in Moscow in 2015:

This cultural collaborations go beyond dance and into the music itself. Egyptian Hossam Ramzy and the Chilean Pablo Carcamo released an album in 1994 made just for belly dance.

It isn't just the unique flavor of Middle Eastern-Latin American mixes like this that listeners like. It's also the greater potential for understanding that they represent, as one YouTube commenter explained:

Wonderful traditional Arabic singing woven into fabulous Cuban jazz. Just like we always dreamed, music will bring people together and give us a chance at world peace.

In Egypt, where the belly dancing tradition is strong, salsa on its own is already pushing boundaries and promoting diversity. As we reported in March, the popularity of the dance has grown, despite the prejudices that exist in a conservative culture.