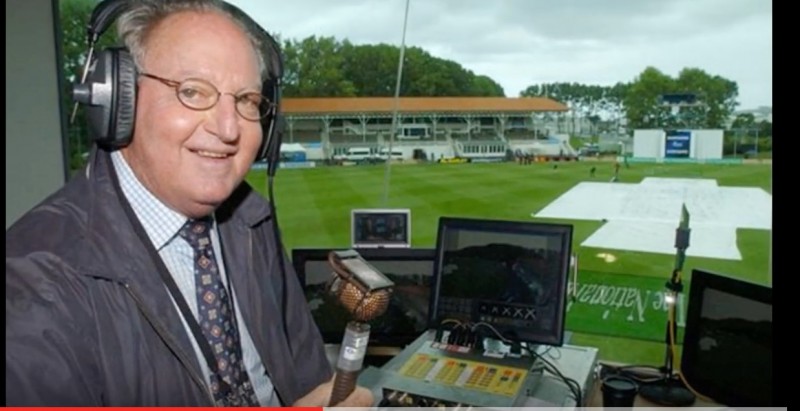 Screenshot of a YouTube tribute video to cricket legend Tony Cozier, which shows him in the commentary box during a match.

On May 11, 2016, the cricketing world lost a piece of its heart: Barbadian cricket commentator Tony Cozier passed away after a long illness at the age of 75.

Known the world over as “the voice of West Indies cricket”, Cozier was much more than a sports analyst. While his commentary was always insightful, measured and fair, his voice — clear, with a melodic Barbadian lilt that some describe as “champagne on air” — conjured up the experience of Caribbean cricket. When Tony Cozier took the microphone, no matter where you were in the world, you were transported to a cricket ground where warm breezes blew, the sparkling sun threatened to blind you if you dared look skyward to follow a ball that was hit for six, and the energy, both on and off the field, was electric.

Cozier's voice, to West Indian cricket fans, was like home, and Cozier himself that benevolent father figure who gave unconditional love. He adored West Indies cricket; lived it and breathed it, and was a worthy steward of the game, regardless of whether the team's performance was mediocre or outstanding.

In the 50-plus years that Cozier was the soundtrack of West Indies cricket, he had seen both extremes: the glory days of the 1970s and 80s when the West Indies dominated the sport and the team's sudden, steep decline in the 1990s and early 2000s, until the popularity of Twenty20 cricket started to play a role in the side's revitalisation.

Unsurprisingly, Cozier was a sharp critic of the West Indies Cricket Board‘s (WICB) lack of vision and poor administration of the game. Nevertheless, the WICB paid him a stirring tribute, saying:

The lifelong work of Tony Cozier centred around West Indies cricket and he made a lasting contribution to the game. […] He was not just a great journalist, but also a great ambassador. He represented West Indies wherever he went. He educated people around the world about our cricket, our people, our culture and who we are. His voice was strong and echoed around the cricket world. He enjoyed West Indies victories and shared the pain when we lost. He gave a lifetime of dedicated service and will be remembered by all who came into contact with him.

A lifetime indeed. The son of journalist Jimmy Cozier who was editor of the St. Lucia Voice newspaper, the young Cozier reported on his first cricket match (Australia vs. the West Indies at Barbados’ Kensington Oval) at just 15 years old. He was a solid and prolific writer, branching out into broadcast journalism in the early 1960s thanks to a stint at a Trinidadian radio station. He never looked back, going on to work with some of the most prestigious international broadcasters, including Australia's Channel Nine, the BBC and Sky Sports.

When Cozier first began filing cricket stories from different parts of the world, they might not make the sports pages for days; the immediacy with which news of his death flooded social media sites like Twitter and Facebook may very well have amused him, but the fact that he was trending speaks to the impact that he made — on the region and beyond.

Just told my old man, who's devastated. RIP Tony Cozier, one of the greatest to hold a microphone at the cricket. Our game is poorer today.

Difficult to say goodbye to #TonyCozier, the last legend of Radio Commentary era where non-playing commentators ruled in equal measure.

Cozier didn't play the game professionally, yet he knew it so intimately; this was one of his greatest strengths. Barbados-based journalist and blogger B.C. Pires wrote of his passing:

It’s the ultimate firetruckery for every one of us, and most of us will be lucky not to have to face it for a long time yet, but it came this morning for the most important man in West Indies cricket history who never raised his bat or sent down an over. What the now late Tony Cozier sent down, instead, were millions of words, every one of them up in the block hole, about our cricket. West Indies cricket would be in a good place now, had we listened to TC, instead of the hordes of pompous idiots gallerying themselves in their jackets-and-ties but revealing themselves in their press releases.

Many tweets about Cozier were personal recollections from friends and colleagues, who talked about his generosity (he enjoyed entertaining at his beach house) and his professionalism:

Sad news about Tony Cozier, the voice of Caribbean cricket and a superb commentator. Generous host to many friends at the Conset Bay shack.

I'm really upset about the passing of Tony Cozier. He was one of the finest the comm box has ever been blessed with and a good friend. RIP

RIP to Tony Cozier. A legend of cricket, a superb writer and fearless journalist. He had deep, inspiring passion for sport and journalism.

Even Global Voices Managing Director Georgia Popplewell, who once worked with and interviewed Cozier, said on Facebook:

I learnt more about cricket in the week I spent with Tony Cozier than I could ever have in a lifetime of reading about or watching the game. Farewell to a great and gracious man.

Other updates by Twitter users recalled, among other things, Cozier's skill at storytelling, his expansive knowledge of the game, his integrity, intelligence, gentleness and wit.

I'm still waiting for someone to tell me it is one of those twitter hoaxes. How can Tony Cozier go? Only one word. Great.

While others found solace in cherishing his legacy:

Go well Tony Cozier. You adorned our game. You loved it like a child and a parent. You had respect. You had dignity. And you had love.

Rest in Peace Tony Cozier. The voice of #WestIndies Cricket has gone silent. But the echoes will continue to reverberate. #TonyCozier.