Cue the Next Witch-Hunt Against Russia's News Media 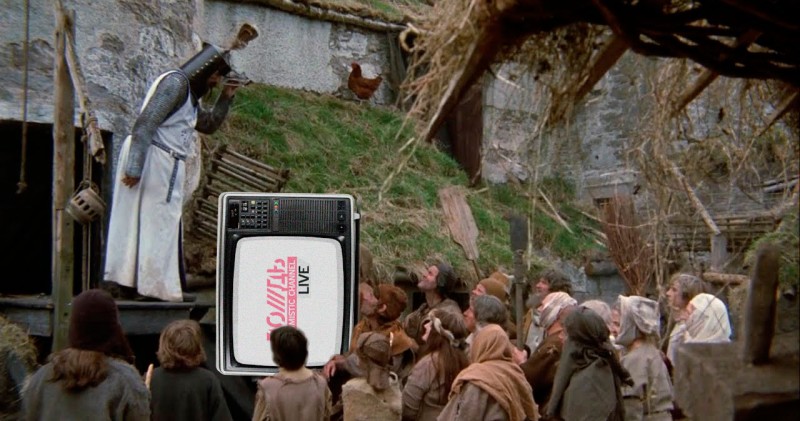 The witch-hunt against Dozhd television. Image edited by Kevin Rothrock.

With the recent release of the “Panama Papers,” money laundering is big news these days, and in a country like Russia, where anti-corruption rhetoric is as popular with politicians as it is with opposition activists, the specter of illicit cash grows scarier by the day. Just this week, officials from Russia’s Justice Ministry requested expanded access to the Federal Financial Monitoring Service, telling parliament that they need new policing powers to trace money secretly entering the country.

But Russia’s Justice Ministry isn’t interested in the Panama Papers’ revelations about offshore deals and loans worth roughly $2 billion connected to Vladimir Putin’s friend, Sergei Roldugin. Russian police want wider access to the state’s records because they’re concerned about nonprofit organizations using companies registered inside Russia to funnel foreign money to nonprofits “working against the country’s interests.” The Justice Ministry’s request is part of a reinvigorated campaign to address the threat of “foreign agents.”

If Moscow is saddling up for another offensive against “foreign agents,” Ilya Ukhov couldn’t have timed it better when he wrote on Facebook this week that the independent television station Dozhd might secretly receive funding from the US government. Ukhov, identified as a “publicist” in news stories, is a frequent contributor to pro-Kremlin news outlets like Vzglyad and Ridus. He has also published articles on the official website of Youth Guard, the youth wing of the country’s ruling political party United Russia, where he’s listed as a “sociologist.”

Ukhov’s allegation is a bold one. He says three of Russia’s best respected (and perhaps most hated) liberal news outlets—Dozhd, RBC, and Echo of Moscow—receive funding from the US government, and Dozhd moreover has insisted on getting its money under the table.

As evidence, Ukhov highlights formerly “sensitive-but-unclassified” documents drafted in 2013 and 2015 by the US Office of Inspector General (OIG) regarding the Broadcasting Board of Governors (BBG), a US government agency that oversees Washington’s “civilian international broadcasting,” including the Voice of America, Radio Free Europe/ Radio Liberty, and more. Ukhov also cites the BBG’s own Fiscal Year 2017 Congressional Budget Request, where one of the “accomplishments” for the Voice of America in 2015 is listed as “added national network affiliations for VoA Russian on RBC, Echo Moskvy, and Dozhd for audiences inside Russia.”

OIG’s 2013 report states that BBG’s Office of Strategy and Development “signed an affiliate agreement” with RBC, arranging to put a Voice of America reporter on RBC’s business news TV station every weeknight. The report also describes an “affiliate-type relationship” with Dozhd, albeit without a “formal agreement,” due to the outlet’s “reluctance to sign any documents with a foreign entity while the current political climate prevails.” The report goes on to recommend that the US government needs to implement “an official policy detailing an internal mechanism for affiliate partnerships without a contract.” In OIG’s 2015 report, this issue is logged as “closed-implemented,” meaning that “agreed-upon corrective action is complete.”

Ukhov says he’s concerned—as he’s explained on Facebook, in comments to the news website Vzglyad, and in an interview with the television channel Life—that Dozhd’s “informal affiliation” with the BBG could be a scheme to disguise funding from the US government:

The absence of formal contacts may indicate Dozhd’s improper observance of its tax obligations and its use of fraudulent schemes to legalize financing received from the BBG. As you can imagine, this offers a wide array of reasons for the Federal Tax Service and Attorney General’s Office to conduct inspections of the television station.

Perhaps in part because the BBG mentions its partnerships with Russian liberal media outlets in its 2017 budget request, Ukhov simply assumes these affiliations involve exchanges of cash. Admittedly, one of the “program changes” described in the budget request basically equates the threats of “Russian misinformation” and “ISIL recruitment efforts,” saying Voice of America plans to launch a $3.5-million digital content project “targeting Russia and ISIL.”

If the Voice of America’s partnership with RBC is any indication, however, it’s pure speculation to suggest that the US government is funneling money to Russia’s independent media through “affiliate agreements.” When raising its concerns about the BBG’s informal affiliation with Dozhd, for instance, the OIG warned only that problems risk “the unilateral interruption of operations,” framing it as an issue of access to Russian airwaves, rather than financial bookkeeping.

Ukhov says he will consult with lawyers to determine if there are legal grounds for demanding a police investigation into Dozhd’s informal “affiliate-type relationship” with a US government agency.