After Months of Investigation, More Doubts Than Certainties Remain in Mexico's Ayotzinapa Case 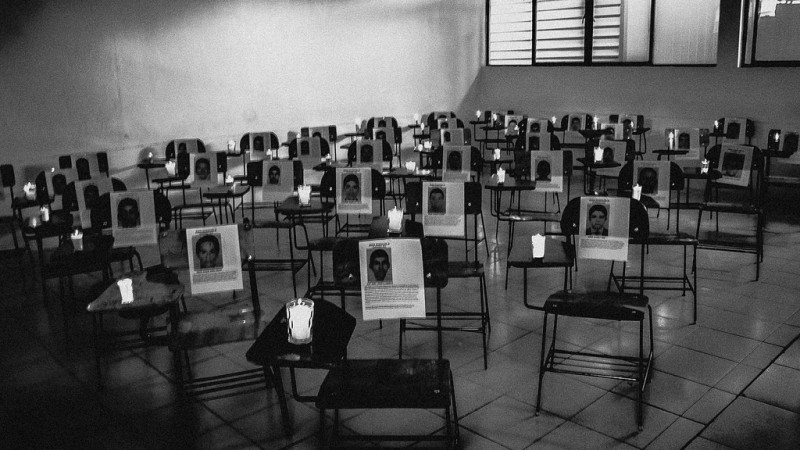 Where are they?! Ayotzinapa. 43 are missing. Photo from Flickr user Flickr Uriel López. Used under a CC 2.0 license.

Where are the 43 Ayotzinapa students? This question remains unanswered 19 months after the group of teaching students were detained by local police in Mexico and disappeared afterward, even after experts nominated by the Inter-American Commission on Human Rights (IACHR) finished their work assisting the country's authorities.

The “historical truth” upheld by the Mexican government claims that the 43 students were detained by municipal police officers from Iguala and Cocula, in the state of Guerrero (Western Mexico), to prevent them from reaching a protest they were going to. According to this version of events, the 43 students were then handed over to members of organised crime groups and executed in different places at different times.

The young people's bodies were taken to the Cocula landfill where, in a large fire which lasted many hours, they were incinerated and subsequently crushed and thrown into the San Juan river.

Since the Mexican government, through then Attorney General Jesús Murillo Karam, published this “historical truth”, the term has been heavily criticised by the public, even though it is not meant to describe the investigation as an absolute truth. It is a technical and legal description used daily in courts to refer to the Public Ministry's goal of investigating and describing events in terms of facts relevant to criminal law.

But the reality is that some members of the public are suspicious of this “truth” and are actively seeking to disprove it. Thus the participation of a panel of international experts was welcomed. In November 2014, the Mexican State and the IACHR signed an agreement to allow the Interdisciplinary Group of Independent Experts (GIEI, by its Spanish acronym) to provide technical assistance in the search to bring the missing students back alive. This was to take place over a six-month period, extendable “for the length of time necessary to fulfill” this mandate.

The GIEI AYOTZINAPA was created by the IACHR in agreement with the state and representatives of victims, to provide technical assistance.

Users like Miguel laid out what many expected of the GIEI:

The GIEI vs the lying experts of the Attorney General's office. A stone in the shoe of [Mexican President] Enrique Peña Nieto who is counting on time, fatigue and oblivion.

On the last day of April 2016, the extension of the agreement ended, which led to the closure of the GIEI's activities and its departure from Mexico.

What is the GIEI's ‘truth'?

This is where things get complicated. Many people who disagree with the government and the way the issue has been addressed assumed that the GIEI would be on a mission to destroy Attorney General Murillo Karam's “historical truth”. They thought that the GIEI would establish a new theory about the case that exposed mismanagement by Mexican investigators and experts.

This doesn't appear to have happened, or not entirely. None of the GIEI's activities demonstrated that events occurred in a way that is diametrically opposed to the Mexican authorities’ version of events.

The debate has focused around the final resting place of the bodies, given that some members of GIEI believed it was impossible for them to have been burned in the Cocula landfill. This central point, about the way in which the criminals could have disposed of the bodies, has also been studied by the Argentine Forensic Anthropology Team (which intervened in the investigation at the request of the families of the missing students). They did not deny that the incineration happened, but they did denounce the fact that they were not allowed access to certain procedures where evidence was collected.

The absence of a new theory on the case has made some people uncomfortable, as illustrated in this comment from Twitter user Fernando Lozada Cruz:

First tweet: In order for an investigation to be impartial, the suspect should not have power over the evidence: GIEI on [head of the Attorney General's Criminal Investigation Agency Tomás] Zerón

Second tweet: @CentroProdh GIEI AYOTZINAPA only denounce obstacles because they could not solve the case, they turned out to be a fraud

Image: After more than a year of investigation and charging two million dollars, the GIEI was not capable of presenting an alternative to the fundamental conclusions of the investigation conducted by the Attorney General, nor of clarifying where the 43 students are.

Little is known about the technical assistance that the GIEI – according to its mandate – was supposed to provide for the search to bring the missing students back alive. We only know that the search (with or without assistance) has been fruitless, since the students have not appeared, except for one whose burnt remains were identified by the University of Innsbruck (Austria), a prestigious institution which has also assisted in the investigations. 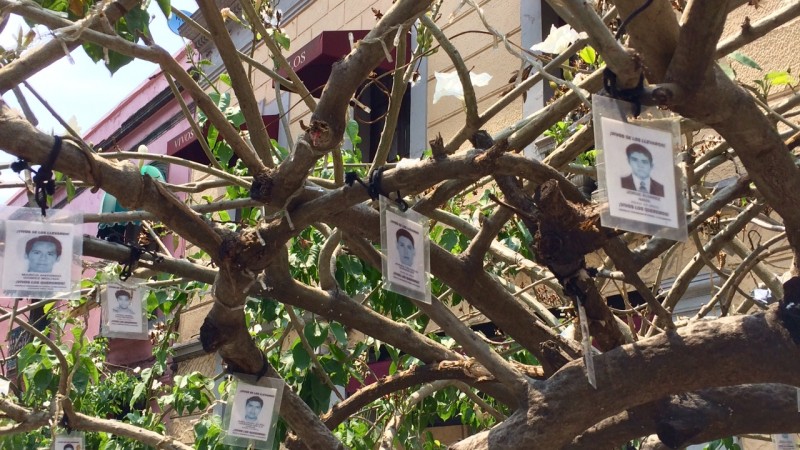 Urban tribute in Mexico City in which photos of the missing Ayotzinapa students are shown. Image by J. Tadeo

The ‘elephant in the room': torture

In its final recommendations, the GIEI drew attention to the matter of torture, which some of those detained in relation to the violent acts of September 26 and 27, 2014, in Guerrero claim to have suffered. This torture was not uncovered by the GIEI, but rather is mentioned in various volumes documenting prior investigations, including the certification of experts in the matter who recommended the application of the Istanbul Protocol, an international instrument for the investigation of these kinds of practices.

Nevertheless, to date no government agent has been held responsible for this violation of human rights in the case.

The independent news website Sin Embargo compiled in one text references to torture made by experts:

At least 17 of the people detained in relation to the case suffered some type of physical abuse or torture, including the five alleged members of the criminal group Guerreros Unidos, whose declarations are the basis for the theory regarding the murder and incineration of the 43 students in the Cocula landfill in Guerrero.

Torture is unacceptable in any context, but is not surprising coming from the Mexican state, given that other international authorities have indicated that it is common practice in the country and that it usually goes unpunished. So far it seems that the case of those detained in relation to the Ayotzinapa case is no exception.

Before leaving the country, the GIEI became immersed in a dispute with Tomás Zerón, the head of the Attorney General's Criminal Investigation Agency, accusing him of participating in procedures that do not coincide with what is documented in the case records, including going to the San Juan river with one of the suspects who was not accompanied by his lawyer. This fact was part of one of the GIEI's final recommendations:

It is also necessary to investigate, taking into account the evidence presented by the GIEI, the actions of the officials who appear in a video taken on October 28, 2014 on the banks of the San Juan river, conducting an inspection of the area with a suspect, the collection of evidence from the river and the fact that they hid these procedures from the EAAF [Argentine Forensic Anthropology Team].

Zerón has denied any wrongdoing and is supposedly now being investigated by the Attorney General's office.

The Ayotzinapa case has happened under the watch of Mexico's Institutional Revolutionary Party (PRI, by its Spanish acronym), which returned to power in 2012 after 12 years as the opposition. This is a disgraceful episode which evokes the impunity of members of PRI for the Tlatelolco massacre in 1968 – where a number of victims are still unknown – as well as other macabre events in which the right to the truth has been crushed, overshadowed, and access to justice has yet to arrive.