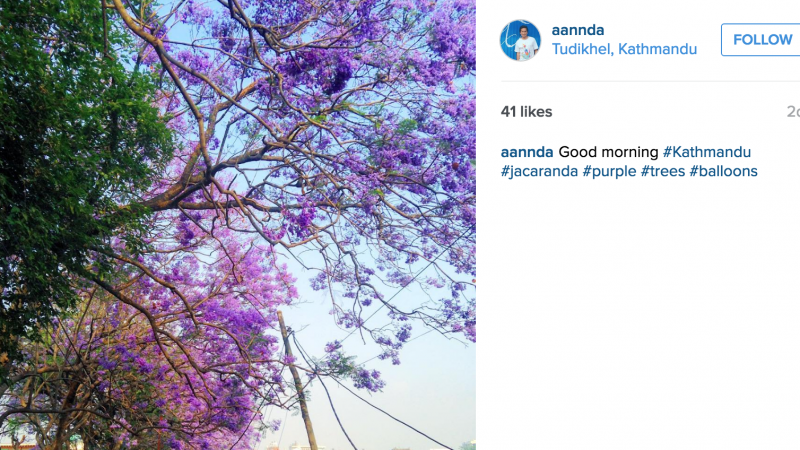 At the moment, Kathmandu looks like a city in bridal make-up, thanks to the blue jacaranda in full bloom. But with the spring season coming to an end, it’s your last chance to see the flowers in Nepal's capital city.

Fortunately, Kathmanduites never get tired of sharing the pictures of their beautiful city on social media.

Kathmandu's @Durbarmargh today; rarely does the blvd look as gorgeous as it does when its #jacaranda are in bloom. pic.twitter.com/5ezt4WA66s

Had there been a little less dust and smoke, how much more the jacaranda would smile in Kathmandu.

@lochangyawali Most literature state the ones found in Nepal are Jacaranda mimosifolia & Jacaranda ovalifolia. But there are many varieties.

Have a look at some more beautiful pictures of the jacaranda in full bloom:

Many Nepalese people mistakenly refer to the jacaranda as “shirish”:

The longstanding confusion between jacaranda and shirish among the Nepalese is thanks to a famous novel called “Shirish ko Phool” (Flower of Shirish) written by renowned Nepali writer Parijat.

On his blog, Kabi Raj Khatiwada explores the history of how this case of mistaken identity came about:

One of the finest book ever written in Nepali literature….Shirish Ko Phool… and one of my personal favorite…. is able to change the identity of the tree…. Seems crazy but the fact is true…… Shiris Ko Phool is a novel written by prominent Nepali writer Parijat (Bishnu Kumari Waiwa) and also published in English language as “The Blue Mimosa”.
While doing translation… I don’t know why… did they took that name… the blue mimosa… and the cover page image… but this was enough to give the false identify of a beautiful tree of Kathmandu.

Slowly but surely, Kathmanduites are now finding out the difference and realising that they are jacaranda trees.

The Shirish flowers turned out to be jacaranda. What could be more misleading than this?

While Kathmandu is blue and beautiful with jacaranda bloom, the southern plains of the country are awash in a pleasing red color because of the blooming gulmohar trees planted along the roadside.

After the rain the environment is pleasant with gulmohar blooming under the clear skies. Just afraid that the heat will torment.