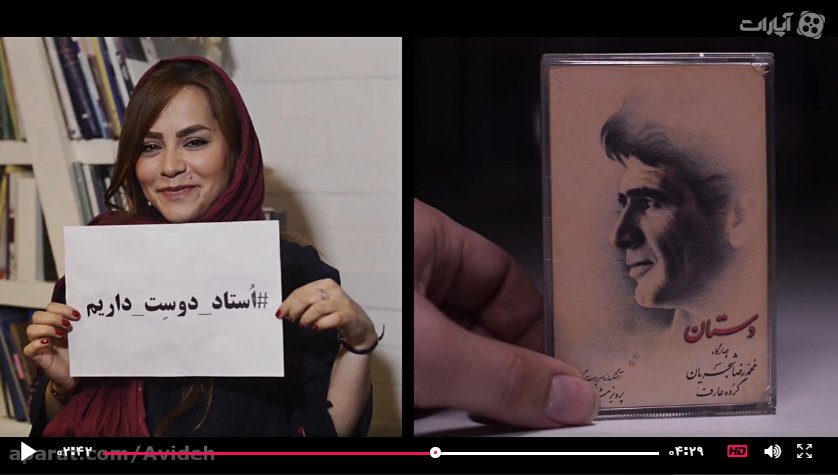 Screenshot of a video honoring the music of Shahjarian. The sign reads “Maestro, We Love You”

Mohammad-Reza Shajarian is the true voice of Iran for many inside and outside the country. His traditional Persian music is played restaurants, tea houses, and ski slopes. It fills the homes of Iranians all over the world, whatever their political views.

The 75-year-old icon has been battling cancer throughout the past few years, and his health has become a concern for music lovers everywhere. As a tribute to Shajarian and his music, the marketing site Avideh recently published a video of people lip-syncing to one of his songs and sharing messages of love, including the hashtag #Maestro_We_Love_You.

In a tweet promoting the video, Avideh called Shajarian the “voice of the people of Iran”:

Shajarian, voice of the people of Iran: #Maestro_we_love_you #Shajarian

Facebook user Shervin Nekuee shared the video and wrote his own message to the ustad (maestro):

This past March, Shajarian released a video to mark the Norouz (New Year's) holidays in Iran. In it, he discussed his cancer, wished people the best and conveyed his hope for the future.

Shajarian is not only a master of Persian traditional music, but also a music historian who revived the public's love for traditional forms of music in Iran. His work archiving and sharing that music is a large part of the reason why it is now popular with younger generations. For his musicianship and his work to save Iran's cultural heritage, he was twice presented with awards from UNESCO (United Nations Educational, Scientific and Cultural Organization). In 1999 he was presented with the Picasso Award and in 2006 the Mozart Medal.

If you're new to his music, many of his songs are available on YouTube for your listening pleasure. Here's one to get you started: