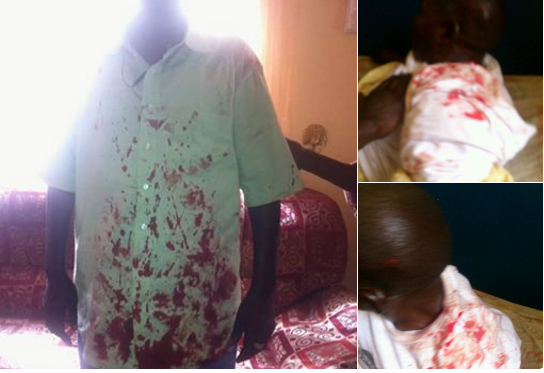 A screenshot of a Twitter image of injured activists posted by Gambian journalist @freejobe39.

Authorities in the tiny West African nation of the Gambia have fired live rounds in their efforts to disperse peaceful protests, according to participants and journalists.

The protesters were marching from a court session featuring Darboe and his United Democratic Party (UDP) members, who were arrested on 16 April — another day when authorities reportedly used live ammunition.

Darboe had picked up the mantle of protest following news that Ebrima Solo Sandeng, the youth head of the UDP, and two other UDP members died in police custody. Sandeng and the others had been demonstrating 48 hours before in support of electoral reforms and the resignation of President Yahya Jammeh, who has been in power since 1994.

The rallies have continued even after Darboe's arrest. Twitter users shared images of protesters’ t-shirts stained with blood after the most recent crackdown:

In April 2000, Gambian security forces opened fire at student demonstrators, killing up to 14 including a journalist and a Red Cross volunteer. With that grim history in mind, activists and human rights organisations are calling on the international community to do something to protect the rights of people to assembly and peaceful protests:

On 5 May, a high court judge denied Darboe and 19 others bail in the name of national security and the need to prevent the detainees from fleeing. The case has been adjourned to 16 May 2016.