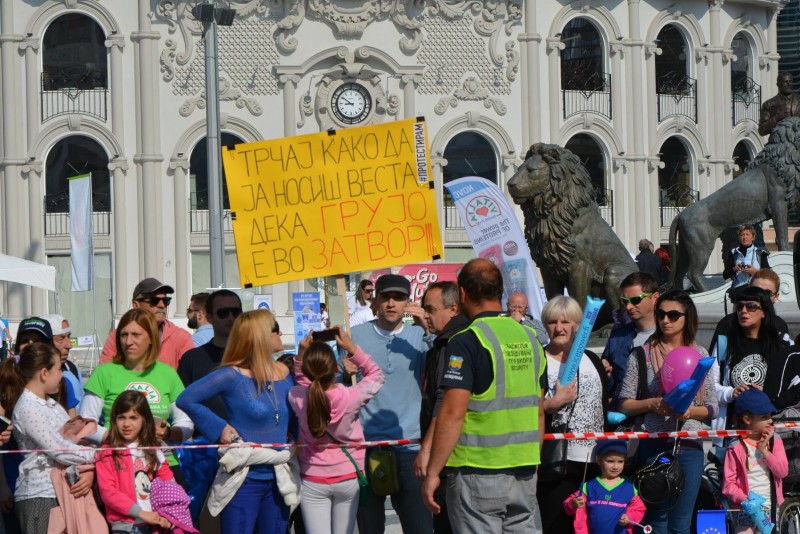 A man holds a sign that reads “Run as if you're carrying the news of Gruevski's imprisonment” at the Wizz Air Skopje Marathon 2016. Photo by Protestiram Facebook Page.

An activist holding a sign that protested impunity for former Prime Minister Nikola Gruevski appeared to hit a nerve during the Skopje Marathon on May 8.

Gruevski is one of many top Macedonian politicians under investigation for corruption. The sign read: “Run as if you're carrying the news of Gruevski's imprisonment.” Three men confronted the activist, stole and ripped his sign, shoved him and hit him in the face.

The Skopje Marathon is one of the biggest public events in the capital of Macedonia, with thousands of participants. In recent years, it has been sponsored and branded by Wizz Air, an air carrier receiving government subsidies to provide affordable flights from Skopje to different airports in Europe.

During the marathon, as elsewhere in the world, both participants and onlookers have expressed their support for various causes –whether it's their company's logo, a message of encouragement for their loved ones running the race, or a political statement — on T-shirts, banners and posters. This year, many in attendance used the occasion to express their support for the so-called Colorful Revolution, the protest movement that sprung up after current President Gjorge Ivanov announced sweeping legal immunity for high-up politicians and their associates suspected of electoral fraud and abuse of power.

On social media, some alleged that one of the three men who stole the sign is employed by a state-owned company, while others suspected he may have ties to a security company owned by Gruevski's family through relatives.

On Facebook, activist and analyst Ivana Јordanovska explained the significance of the incident as she saw it:

There hasn't been a major incident, but it's obvious that the regime considers even the use of force as a potential weapon.

This isn't the first time anti-government dissent has been met with violence. In 2015, there were dozens of incidents involving independent journalists or activists; in one such case, Deputy Prime Minister Vladimir Peshevski attacked a journalist on camera, without any subsequent consequences.

According to human rights defenders, such impunity emboldens others to perpetrate similar attacks. In February 2016, an elderly man was beaten to death in a small village store, allegedly after he “praised the work of Special Prosecutor Katica Janeva” — who is investigating top-level corruption — and “expressed his pleasure at the prosecution of former ministers from the [ruling] VMRO-DPMNE.”

After the marathon dust-up, leftist movement Solidarnost (meaning “Solidarity”) published an article titled “Who are the hooligans here?” stating that the man holding the sign was one of its activists. Within the article, they strung together several photos from the scene into an animated GIF:

Animated GIF with photos depicting three men take an activist's sign and appear to push him at the Skopje Marathon. Photo by Solidarnost, used with permission.

Solidarnost stated that other activists at the event experienced pressure to remove their stickers or other paraphernalia. Noting that the sign was actually a year old and was originally used during the 2015 marathon, they added that they intend to participate in the official competition for the best sign at the event. If it wins a prize, the movement said it will use the prize money to pay fines and legal fees for protesters who face charges. They concluded:

We remind our fellow citizens that the Skopje Marathon takes place in honor of victory over fascism (May 9, 1945). It is obvious that today we still struggle with domestic fascism which uses force in order to prevent pluralism of opinions, threatens and beats people when they don't like a sign. We repeat; we shall not be intimidated by beatings and pressure; they provide additional motivation to be louder and more persistent in our fight. We will give all we can for Gruevski to go to jail as soon as possible, and then we shall run around spreading the good news!

Death to fascism, freedom to the people!