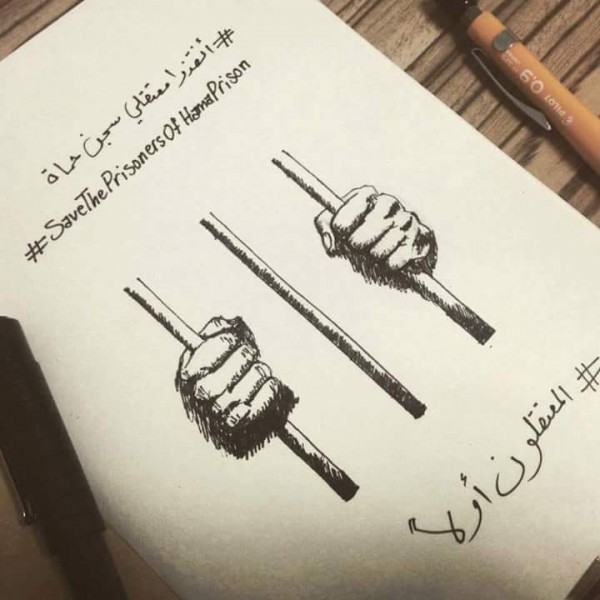 Save the prisoners of Hama prison. Source: @luna_alabdalla (Twitter)

More than 800 mostly political prisoners are believed to be in a grave situation after rioting in the Central Prison of Hama, north of the capital Damascus, in protest against the moving of five inmates who are sentenced to death to another facility — the notorious Sednaya Military Prison. The mutiny was also staged to demand access to trial and better prison conditions.

Regime forces surrounded the prison, shooting live ammunition, petrol bombs and tear gas into the crowded facility after prisoners took some guards hostage. Activists say the prison has been without electricity and water for four days and there is mounting evidence of a possible massacre against the prisoners, already living in dire conditions and subjected to grave human rights abuses.

The stand-off, from Monday, is only becoming worse, as activists raise the alarm online, sharing footage posted by prisoners on social media, showing the extent of the unfolding crisis. Photographs are also being circulated showing regime forces ready to storm the prison.

On Twitter, Luna Watfa shares this photograph from Hama prison and reports:

The situation in #Hama prison is horrible, 2 detainees have been killed , the Syrian regime will make another massacre there#SOS .

Detainees inside the prison have been sharing their ordeal, and calling on human rights groups to intervene to stop a possible massacre. On social media, Syrian activists have published the following statement on their pages in an attempt to highlight the plight of the prisoners:

We are Syrian activists extend without exception this distress call to all international human rights, humanitarian organizations, and to the Organization of Red Cross and Red Crescent Societies, the request to extend assistance to the political detainees in the Central Prison of Hama, after they carried out the intractability of protest against the arbitrary trials suffered by the prisoners, which resulted in the Syrian regime's determination to execution death sentence to many of them. . After negotiations with the regime failed to improve the conditions, the detainees were given deadline until 5 am Damascus time to lift the deadlock. In case the detainees did not comply with this threat, the Syrian regime forces will attack the prison in a military operation which is expected to produce a terrifying massacre against the detainees. . We call upon all international bodies to intervene to prevent an imminent massacre in the coming hours and that upon the request of the detainees, also calls upon the international community to shoulder its full responsibility to deter the Syrian regime against any reprisals action against the detainees. . We hold the international community and human rights organizations responsible for the massacre, which is expected to be committed in the prison by the regime.

From inside the Hama prison, a prisoner shares this appeal on YouTube, saying that prisoners have not had food for three days:

According to Detainees of Central Hama Facebook page a deal is being negotiated with the regime to restore services like water and the provision of food and medicine to the prison. In exchange, the mutiny must end.

Thousands of Syrians are being held in prison without charge and subjected to torture since anti-regime protests broke out across the country in March 2011. Also, more than 270,000 Syrians have been killed in Syria's five years of conflict.