Confused About the Mapuche Conflict in Chile? This Animated Video Can Help 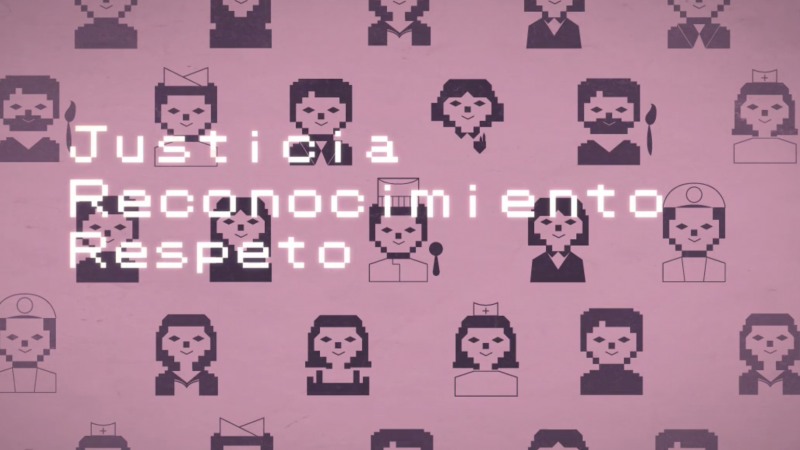 “Justice, recognition and respect” are part of the demands of the Mapuche people and the base of their struggle in Chile. Screenshot from the short animated video “10 Keys to Understanding the Mapuche Conflict,” available on Vimeo.

The conflict between Chilean authorities and the indigenous Mapuche community is far from being relegated to the pages of history. Recent months have seen protests by Mapuche people and several outbreaks of violence.

The issue is complex, and despite being decades and decades old, misunderstanding of the Mapuche's struggle for land rights, justice and respect still abounds inside and outside Chile. As Luis Campos Muñoz at NACLA, a magazine for news and analysis on Latin America, explains:

The past two decades have seen increasing conflict between Chile’s indigenous peoples—particularly the country’s largest indigenous group, the Mapuche—and a series of Chilean governments over questions of land rights and development. Building on the country’s widespread ignorance of the bases and even existence of the Mapuche conflict, both dictatorial and democratic governments have used the euphemisms “dialogue” and “development” to veil the processes by which indigenous communities have been displaced by the construction of dams and highways.

An animated Spanish-language video available on Vimeo, scripted by Hector Errázuriz and María Pía Manquemilla produced by Colectivo Saltamontes in 2013, sheds light on the roots of the conflict and the principal demands of the Mapuche people.

Although it was uploaded three years ago, the film is still useful for its succinct explanation of the history behind the strife. To shed light on the roots of the conflict, Errazuriz Manquemilla made a video, available on Vimeo in which 10 key points are provided to understand the history of the conflict :

The video goes back to the beginning of the the struggle in the year 1880:

It began with the so-called Pacification of Araucanía. Chile had conquered the Big North. Then it reached the south, whose limit was the Bio Bio river. That is why this area is considered the “frontier” [ … ] The Mapuche people lived to the south of Bio Bio. After years of treaties Mapuches and Spaniards lived each to their own.

In that time, the Mapuche people lived on large swathes of land raising cattle and trading mainly with Argentina. But then came the “pacification”, an event “poorly named” because, as the video's narrator says, it was in reality a massacre in the Araucanía region. During this period, Mapuche lands were taken away through deceit, alcohol and guns. At minute 1:34, a list of authors appears in the video, all of which are recommended reading if you want to expand your knowledge of the history.

After this, the Mapuche people were given other pieces of land:

After the land was taken, the Mapuche communities were relegated to small areas of land called “reductions.” […] In addition to the land being small, it was of poor quality.

And so, the rest of the fertile lands were offered to European settlers who wanted to come to Chile. “This is what it all comes back to,” the video says. Thus, with the beginning of the 20th century, Mapuche people organised to reclaim their rights and demand reparations. And here's the reason:

Life in the “reductions” meant poverty, humiliation, violence. The Mapuche were not always poor peasants […] For this reason, Mapuche political parties and parliamentarians have spoken out.

With the government of Salvador Allende in the early 1970s, reparations began to seem possible, but this was abruptly interrupted by the coup lead by Augusto Pinochet. Years later, after the dictatorship, these plans were put back on the table:

With the return of democracy some things changed, but others, related to classism and racism, remained the same.

The video ends at the present, pointing out that there doesn't have to be hostility in Chile between authorities and the Mapuche people. Countries like Canada, Finland and New Zealand share a similar history with indigenous people, and they recognize and respect themselves as multicultural countries.

At the same time, video underlines the importance of understanding the diversity and complexities inside the Mapuche community itself:

There are Mapuche peasants, singers, poets, economists, bakers, merchants, lawyers. There are different opinions, perspectives about what we want for the future. The mosaic of the Mapuche people is diverse. But all who have an awareness of being Mapuche are united by the desire for justice, recognition, respect, equality and value.