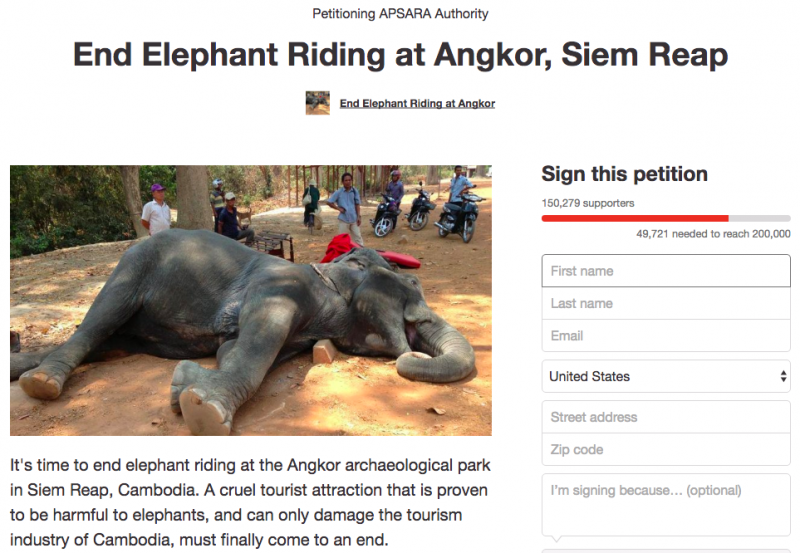 A tourist elephant dies from heat stroke in Angkor. Photo from an online petition calling for an end to elephant riding. Source: change.org

The El Niño weather phenomenon is partly responsible for plaguing Cambodia with rising temperatures and water shortages. The extreme drought is reported to be the worst in the past 50 years.

According to the government, 2.5 million Cambodians in 100 districts have been affected by the drought, and water shortages have been declared in 18 of the country’s 25 provinces. Meanwhile, nine provinces are experiencing heat waves.

Low water supplies have exacerbated poverty in many rural areas, where farmers depend on rivers and ponds for irrigation. Food security and local populations’ health are also growing concerns.

A look at drought's devastating toll on #Cambodia https://t.co/hTbLWt2AXQ pic.twitter.com/cp5jNmnBIs

Fishermen collect fish at a dried up pond at the #drought-hit Kandal province, #Cambodia pic.twitter.com/FYWfyUFlfx

Another video shows how some families in rural areas collect water in an almost dry watering hole in Banteay Meanchey province:

Animals are dying because of the water shortage and heat stroke. About 65 tons of fish in Tonle Chhmar lake died last month because of decreasing water levels:

A tourist elephant in Angkor succumbed to heat stroke. Because of this incident, some Internet users launched a petition urging the authorities to end elephant rides, which are still popular among tourists.

The Cambodian government is asking for cooperation and unity in the nation's response to the drought crisis. Officials vow to provide immediate aid to residents experiencing water shortages.