Iran's Shrinking Lake Urmia Comes Under the Spotlight, Thanks to Hollywood's Leonardo DiCaprio 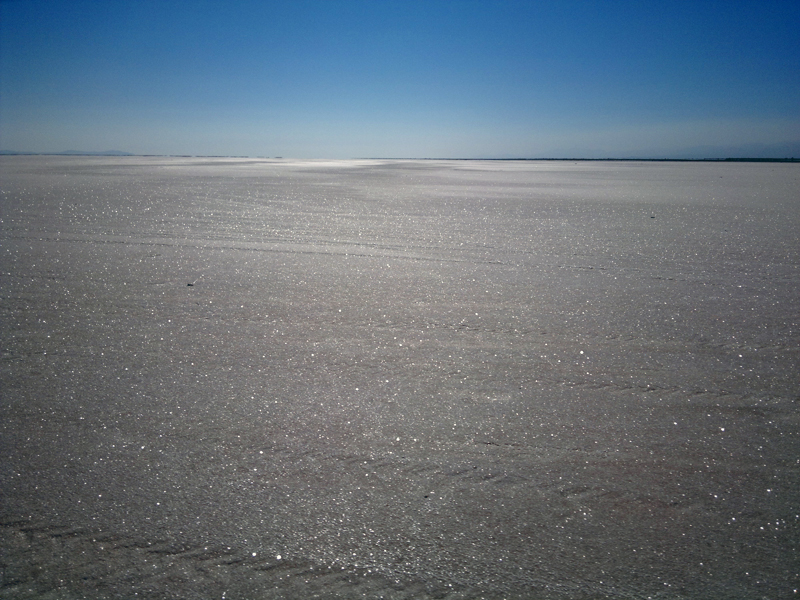 In one “regram,” American actor Leonardo DiCaprio has brought a flood of attention to Iran's drying Lake Urmia.

Lake Urmia (sometimes spelled Orumyeh or Urmieh) has been an issue for Iranian environmentalists and water engineers for years. The lake was once the largest salt water lake in the Middle East. Poor water management, reckless infrastructure projects, and drought have combined to threaten the very existence of the lake.

Leonardo DiCaprio shared an image from American TV outlet The Weather Channel of the drying lake in an Instagram post shared on May 5, 2016.

Twitter was soon inundated with praise for the actor's Instagram post. The United Nations Development Program representative in Iran, Gary Lewis, thanked the actor for bringing the world's attention to the lake:

#Iran: Thanks @LeoDiCaprio for drawing attention of the world to Lake Urmia. All hands count. Keep up the great work pic.twitter.com/Fp0yQS7jJe

Lewis has long been involved in activities to reverse the drying of the inland salt lake.

Thanks alot for your notice @LeoDiCaprio, at least one person hear our scream!
it's need to do more to save #urmialake / #LakeUrmia!

Journalist Omid Memarian was also among those thanking DiCaprio for sharing information about the lake:

The drying of the lake has an impact for the whole world. The brine shrimp in Lake Urmia have been an important food source for many migratory bird species. Flamingos, egrets, pelicans, and other birds were once abundant in the area.

The area's residents are suffering the most. The salt exposed by the drying lake has already poisoned the soil, destroyed generations of agricultural land, and has the potential to disrupt the lives of millions.

‘If it goes dry, we'll just have to go somewhere else’

Some users went beyond thanking the actor. Amir Ghias tweeted about the rehabilitation of the lake:

The rehabilitation of #Lake_Urmia is having an effect, but it takes time.

Image widely shared during the 2011 protests to bring attention to the drying lake.

Lake Urmia is on the border of Iran and Turkey. It has long been a central feature for the region's residents. The lake has been a source of income and cultural pride. Its deteriorating condition has caused concern among populations in both Turkey and Iran. In 2011, this resulted in widespread protests. Read more about the protests on Arseh Sevom and Global Voices.

From the other side of the world there is worry about the drying of the lake. I asked if they knew what disaster would befall us if the lake were to dry up. They said, if it goes dry, we'll just have to go somewhere else. #urmialake

They worry about Lake Urmia when they should be worrying about the Bay of Pigs. Have they no shame #UrmiaLake

Is it too late to save the lake?

Leonardo DiCaprio may not be able to save the lake. But there are many people in Iran and around the world working to bring it back from the brink. In an interview with Scientific American, Hossein Akhani, a biologist at the University of Tehran, was asked what the government of Iran was doing to save the lake. He stated:

The Urmia Lake Restoration Committee set up expert committees who made an action plan in 2014, which was approved. In the Iranian calendar for 2015 until 21st of March in 2016, 660 million dollars was invested in 88 projects in the area. For example, they gave 200 million cubic meters of dam water to the lake and connected two rivers so the water flows more easily. They are constructing a canal to bring water from a river near the Turkish border to the lake. They also started subsidizing agricultural sectors to reduce their water use.

They certainly have their work cut out for them. This GIF shows how much the lake has diminished between 1998 and 2014:

We'll conclude with this image Gary Lewis recently shared on his Facebook page. The recent wet winter in Iran has contributed to an increase of 5 cm in the water level of the lake. Because Lake Urmia is so shallow to begin with, this is a significant increase. 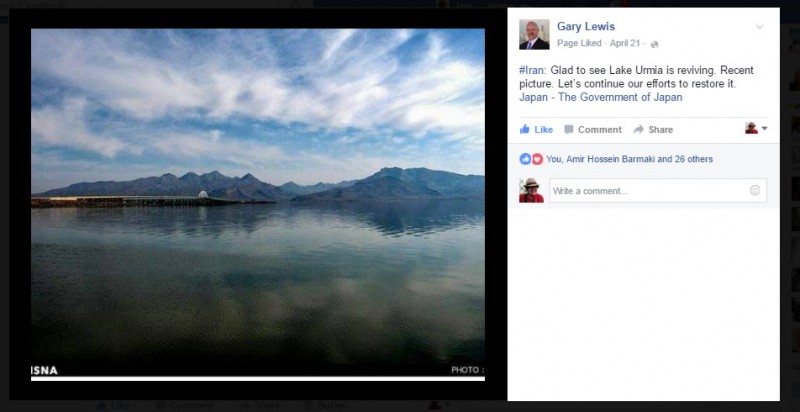 “Let's continue our efforts to restore it.”

Other coverage from Global Voices: