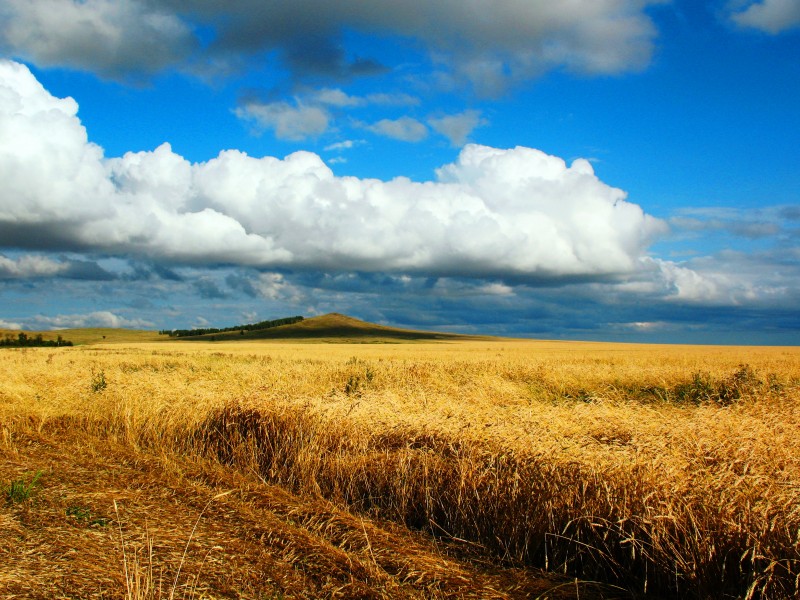 It's about the land. Or is it? Grain fields near Kokshetau, Kazakhstan by Breshuk. Wikipedia image.

With Kazakhstan's pro-government media — which is the majority of media — studiously ignoring protests over land reform plans that have enveloped the Central Asian state over the last couple of weeks, it was left to social media to try and provide a serious explanation of what the unrest was, and was not about.

While ordinary Kazakhs have any number of reasons to kick off at the moment — Bloomberg named the tenge as the world's worst-performing currency last year and inflation is strident — the spark that triggered protests in different corners of the vast country was a proposal to amend the land code in a way that would make more unused farm land commercially available and extend land leases for foreigners.

And when pro-government media finally did decide to dedicate coverage to the topic, it was mostly to stoke public rage by suggesting protesters were foreign funded sellouts.

Finally, on May 5, after a two-week period in which several provincial cities saw protests involving up to a thousand people or more, 75-year-old Kazakh President Nursultan Nazarbayev moved to block the reform for at least another year, a move that may well draw the sting from the protest mood.

But even if broader unrest has been quashed for the moment, the question remains: how did one of the more stable authoritarian governments in the ex-Soviet Union find itself in such a mess in the first place?

1. The Wild West and the Surly South

Privatization of land and use of land by foreigners is a controversial issue in ex-communist countries where the transition from the former Soviet Union to capitalist independence was associated with elites getting rich and the poorest parts of the population growing increasingly disenfranchized.

A particularly unpopular element of the present land reform proposal is a legislative clause that would increase lease terms on Kazakh land used by foreigners from 10 to 25 years.

Writing as the land protests spread across the country's West and South, political analyst Dosym Satpayev noted the appearance of two bastions of deep-seated ambivalence — if not all out opposition — to Kazakhstan's autocratic regime. 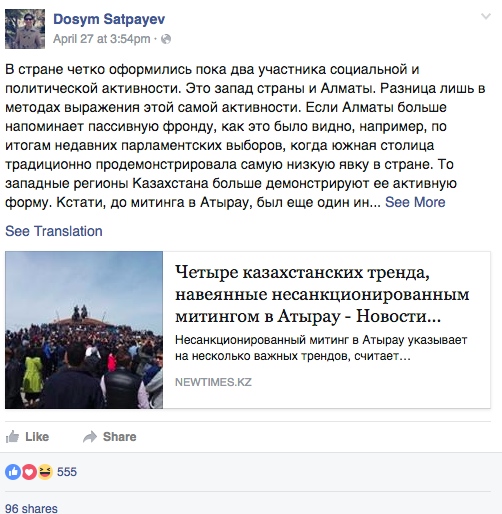 Inside the country two areas of social and political activity have taken shape. One is the West of the country and the other is [largest city, situated in southern Kazakhstan] Almaty. The only difference is in methods of expression.

If Almaty is more like a bastion of passivity, as was seen, for example, in its especially low turnout during the recent parliamentary elections, then the western regions of Kazakhstan are more demonstrative in their expression […]

Referring to Western Kazakhstan and Almaty as politically active regions is mostly academic, however, as a social explosion could now actually occur in any part of the country and on any occasion […]

Economist Tulegen Askarov noted that pro-government media such as Kazakhstan Pravda was resorting to ever-more desperate messaging in an attempt to persuade citizens not to join protests.

The image in the article he posted is from neighbouring Kyrgyzstan, whose more democratic political system Kazakh state media tends to deride as chaotic, although as another Facebook post noted, that kind of propaganda is losing its power now that Kazakhstan's ‘stability’ has grown less attractive to ordinary citizens.

It is notable that Nazarbayev used Ukraine — another country that has experienced violent revolution — as an example of what Kazakhstan should avoid becoming on the country's Unity Day on May 1. 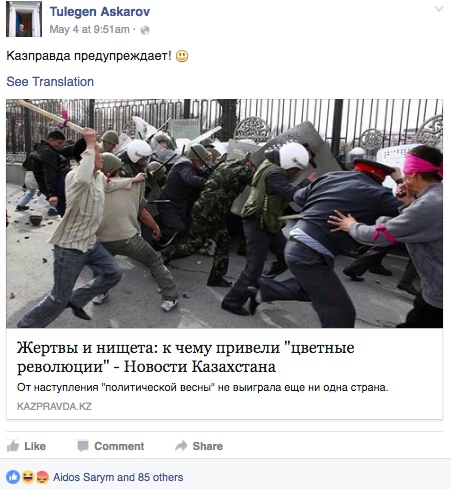 Tulegenov writes: Kazpravda [newspaper] has warned us!
Article title: ‘Victims and poverty – What the “Color Revolutions” Led to’.

One of the most extraordinary indicators that the state had lost the public relations plot amid the protests was the sight of a news presenter on government-controlled Channel One Eurasia cryptically blaming a “fifth column” supported by people “very far away” for funding the land-related unrest.

The presenter suggested that these external forces “very far away” (cue suggestive gesture with a pen) had offered protesters $100 and more to engage in the protests.

Many observers, including PR specialist Alisher Yelikbayev noted that the broadcast was drawn straight from the Russian playbook.

With Kazakhstan having relatively little protest management experience however, the messaging was rather more clumsily executed. 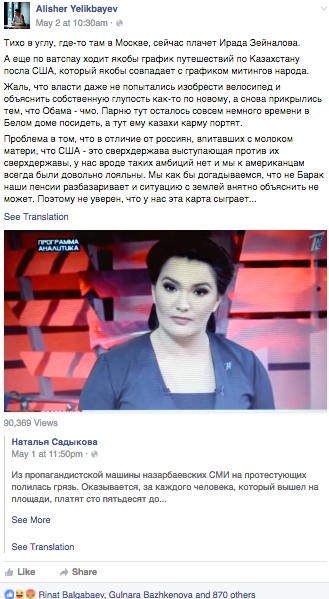 It is a pity that the authorities do not even try to reinvent the wheel and explain their own stupidity in a new way, but rather content themselves with the notion that it is all Obama's fault. The guy has very little time left to sit in the White House, and then the Kazakhs go and spoil his karma.

The problem is, that unlike Russians, who from birth are brought up on the idea that the United States is the superpower that thwarts their superpower, we are less ambitious and have generally not minded the Americans.

We hazard a guess that it is not Barack Obama who is spending away our pensions and that he probably does not have the slightest clue about this particular land issue. Therefore it is not certain how playing this card will go down…

4. Who is provoking whom?

Former Deputy Education Minister Marat Ubenov also took exception to the wave of propaganda blaming “third forces” for what appeared to be a domestic response to poor domestic policy-making and government communications strategy. 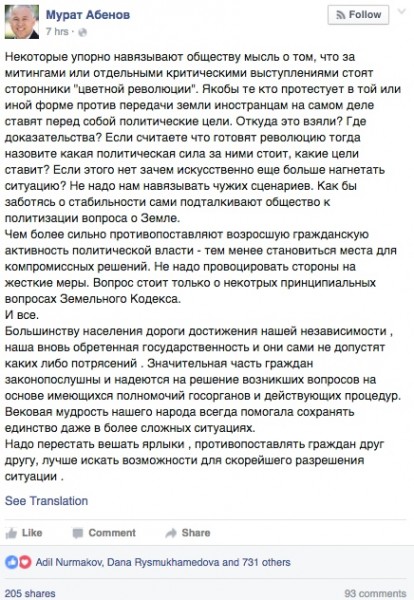 Some stubbornly insist that the people taking part in these rallies are agents of a “color revolution”. Allegedly, those who protest in one form or another against the transfer of land to foreigners are actually setting themselves broader political goals.

Where did this information come from? Where is the proof? If you think that they are preparing a revolution then name which political force is behind them, with what aims. If this is not the case, then why artificially cause the situation to escalate? […]

Those supposed to ensure stability in society are instead pushing for the further politicization of the land issue.

The more strongly government opposes increased civic engagement, the less space there is for compromise. Do not provoke a stronger reaction. The issue at stake is a dumb land code. That is all.

4. No press conferences please, this is Kazakhstan

The government showed it was in no mood for debate over the land reform proposals on April 29 when it detained a number of activists planning a press conference in the former capital Almaty on April 29.

How can you detain people that wanted to give a press conference? Yes, of course it is a rhetorical question.

The growing social unease in Kazakhstan also prompted a reappraisal of resource-poor Kyrgyzstan's two revolutions, which while failing to bring the kind of prosperity seen in oil-rich Kazakhstan, at least ensured democratic gains including free elections, term limits respected by presidents and genuine space for policy discussions. 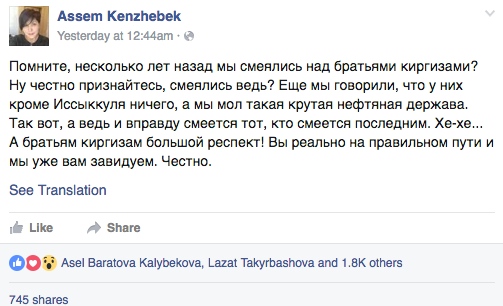 Remember how several years ago we laughed at our Kyrgyz brothers? Admit it, you laughed at them, no? We said that they had nothing bar the Issyk-Kul Lake and that we were this great land of oil.

Well, in truth, he who laughs last laughs loudest. He he.

And big respect to our Kyrgyz brothers. You are on the correct path and now we envy you. Honestly.

With the prospect of a nationwide protest later in the month looming, President Nazarbayev took action, backing down on the Land Code amendments. 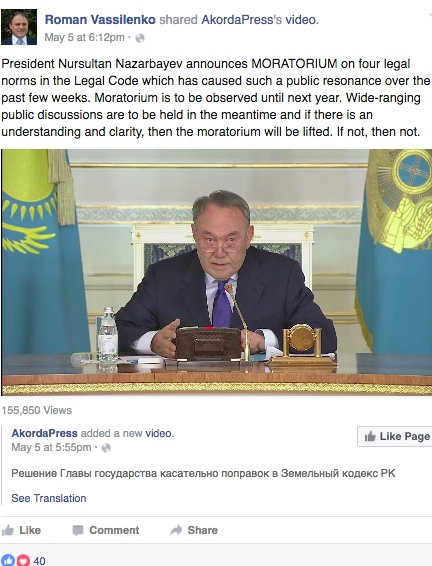 6. Why did it take so long to do something so simple?

Facebook satirist Rinat Balgabaev meanwhile wrote a typically witty post imagining a conversation that had taken place in presidential residence prior to the decision to block the amendments. 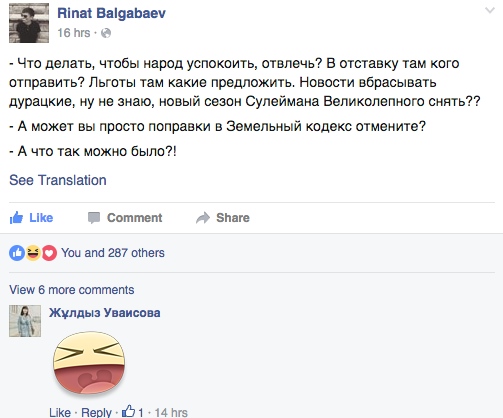 - What to do, how to calm the people, distract them? Maybe I could sack somebody? Offer some concessions. Put some stupid news out there, I don't know, film a new season of ‘Magnificent Century'?

- Maybe you can just drop the land code amendments?

- You mean we can just do that?

On the same day, an MP in the exclusively pro-government parliament, Gulzhana Karagusova, criticised journalists for “taking words out of context” regarding the land reform and generally inflaming the situation. 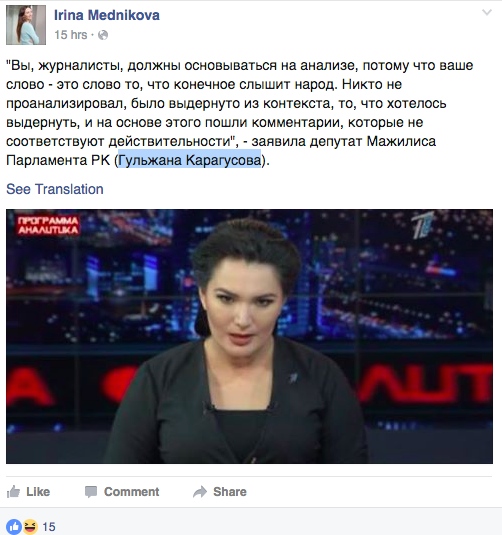 “You journalists should also be analysts, because your words are the words that people finally hear. Nobody analyzed anything, [words] were taken out of context, and based on that, there was a discussion that did not correspond to reality,” said MP Gulzhana Karagusova.

In the aftermath of a potentially toxic public relations crisis, President Nazarbayev has ordered the dismissal of two ministers as well as the creation of a ministry of communication to be headed by his former press officer, while citizens across the country have received SMS messages explaining that the land reform has been temporarily shelved.

All is well that ends well?