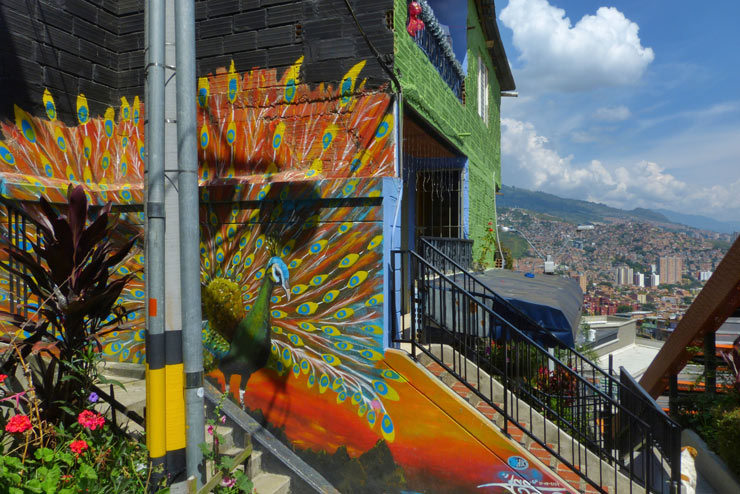 View of Medellín and the murals of Comuna 13. Photo by Yoav Litvin, previously published in Brooklyn Street Art and reproduced with permission.

Following decades of efforts towards reconciliation and reinvention, the Colombian city of Medellín gives the impression of having left behind its dark history to focus on the future, redefining itself as a place of inclusion and enterprise. Ambitious projects for social inclusion like integrated transport systems [2] and “library parks” [3]have transformed the city's image in the eyes of the outside world.

But, while these innovations reap praise and prizes [4] both in Colombia and beyond, their impact is not felt in many parts of the city, cut off by invisible walls [5] built of fear, volatility and violence.

Situated on the far western edge of the city, Comuna 13 is one of Medellín's most remote districts. Poverty, marginalisation, discrimination and instability are rife here. Violence — both seen and unseen, direct and indirect — remains a tangible presence in the daily lives of the people who live here. The so-called “Medellín Miracle” has passed them by, leaving a great deal of resentment in its wake.

This is the account given by “Kábala”, a community worker from Comuna 13 and a graffiti artist who works to engage local people through graffitours — a tour of urban art that narrates the community's experiences. Speaking with the authors of the Spanish-language blog Bitácora, Urbanismo y Derecho [6] (Urbanism and Rights), Kábala explained the exclusion felt in Comuna 13:

In 13, there is no right to the city. Not having a right to the city creates a sense of having been forsaken, and it creates the perfect conditions for repression. The result is an endless cycle of protests, public and social unrest, deaths, abuse and corruption.

Comuna 13 in particular has been one of the areas of Medellín most severely affected by violent clashes between guerrilla forces, paramilitary groups and the National Army of Colombia, caught up in the wider internal armed conflict [7] that has tainted the last 50 years of the country's history. After decades of armed confrontation between the state and extreme left-wing guerrilla groups, it is the drug cartels, criminal gangs and extreme-right paramilitary groups that now dominate the hostilities. This conflict has a long history that has passed through several distinct phases, each more traumatic than the last. During one such phase, in the 1980s, certain aspects of the conflict were predominantly financed by the proceeds of drug trafficking.

Consequently, Comuna 13 became the scene of numerous military operations, which both exacerbated the conflict and left lasting scars on the community. In one of these operations, known as Operación Orión, armed forces and paramilitary groups joined together to attack guerrilla factions positioned in Comuna 13. According to investigations by digital magazine Los 2 Orillos [8]:

The raids were carried out without a court order, and by the time they came to an end, 355 people had been arbitrarily detained. Official figures indicate 39 civilian injuries, three police fatalities and seven “disappeared”.

Many people became the victims of forced disappearances and indiscriminate violence. Comuna 13 remained under paramilitary control for the next six years, between 1998 and 2004. The discovery of human remains has lent support to the conjecture that up to 300 young people were disappeared during the period of occupation [9]. Witnesses claim that the bodies of these young men and women were dumped in Medellín's landfill site, which overlooks Comuna 13. No formal investigation has ever been opened.

Graffitours: stories of community and violence for collective healing

As a response to its history and to the community's sense of being invisible to and excluded from the Colombian state, community groups such as Casa Kolacho are taking it upon themselves to work together at the grassroots level. They're turning to the internet to demand representation, bring about positive change and ensure that the voices of the people of Comuna 13 are finally heard.

Their initiatives bring together local women and young people, promoting social harmony in the hope of building a happier and safer future. In one of a number of projects, graffiti and murals are providing a medium for telling the story of Comuna 13. Graffitours, offered to both residents of Medellín and foreign visitors, allow the community's stories to be narrated through the artistic appropriation of urban spaces; spaces which, both historically and politically, have come to symbolise its violent past. Some of the murals that feature in the tours can be seen in the video below:

Creating #CiudadaniaParaLaPaz [10] [Citizens for peace] through memory, art and resistance

For Kábala, the community worker and graffiti artist from Comuna 13, graffiti provides a means to contemplate the violence of the past and to preserve the community's historical memory.

In this Spanish-language video, shared by Catherine Vieira [15], Kábala and El Perro, the co-creator of Casa Kolacho, give their account of Operación Orión, and speak of violence both past and present. Art plays a key role in collective recovery and in the different ways in which the community as a whole finds healing.

In Comuna 13, graffiti is a reminder of the past; it's telling a story, and what it says is that we don't want to see a return of the barons who play at war, who see war as a business. We can't allow ourselves to be drawn back into the same old story. That's what the graffiti is for — it's an acknowledgement and a reminder of what happened during that time, between 1998 and 2004.

It's a way of telling people that we are part of what happens here, and it's our job to tell new leaders, and the young people, that we must start seeing this community in a different light.

Even if, in spite of everything, the violence goes on:

Today, Comuna 13 is Latin America's most highly armed neighbourhood. The violence here has continued; all that has changed is the form that it takes. The political violence of the guerrillas has given way to the violence of gangs, of drugs, of money, of territorial disputes. The violence continues here — against women, against children, wherever education is lacking — just like it does in the rest of Medellín, from El Poblado to Castilla. It's a social sickness […] We tell this story with great sadness, but we have to keep the memory alive. The memory must never be lost, because when you forget, you tend to go back and repeat the things that have happened in the past.