For Trinidad & Tobago, the Olympics Gymnastics Furore Is About Perceived Corruption 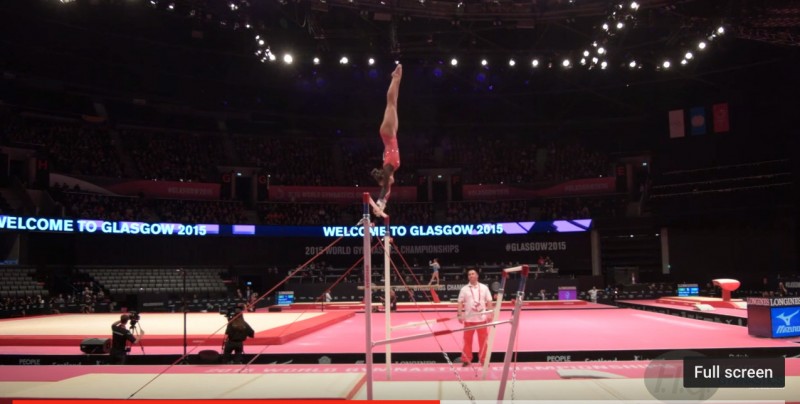 Screenshot of a YouTube video of gymnast Marisa Dick competing at the 2015 World Qualifications in the Uneven Bars.

In the latest turn in the Trinidad and Tobago gymnastics drama, some netizens seem irritated that a blogger from outside the twin island republic appears to be lecturing them on how they should react to — and report on — an issue that has wider ramifications in their own country.

Lauren Hopkins, the US-based founder and editor-in-chief of gymnastics news website The Gymternet, recently posted an article that attempted to clarify the controversy surrounding the Trinidad and Tobago Gymnastics Federation's (TTGF) choice of Marisa Dick, who was born in Canada but holds dual citizenship, to compete for a spot at the Olympics in Rio de Janeiro over Trinidad-born — and higher ranked — gymnast Thema Williams.

Williams met the TTGF's qualification criteria by placing higher than Dick at the 2015 World Championships in Glasgow, but was yanked by the federation at last minute — while she was already in Rio for the Olympics Test Event — over an injury, ostensibly in the athlete's best interests. Williams had faced a disciplinary committee a few weeks prior over a topless photo she posted on Instagram. Dick had similar proceedings brought against her for a topless photo of her own.

Many in Trinidad and Tobago believe the federation's decision was illegal, and Williams and her team plan to take legal action against them. According to her contract, her removal from competition could only happen after her coach and medical personnel were consulted, but the TTGF president himself admitted not everything happened as it should. Allegations have also swirled that two members of the federation have conflicts of interest that favor Dick over Williams.

Trinbagonians know all too well the effects of living in a society where the perception of corruption is high. While some social media users in Trinidad and Tobago did share the Gymternet post, using it to explain why they supported Dick, other commenters were irked by it for seeming to belittle the implications of the TTGF's decision to pull Williams:

It’s important to note that the TTGF’s initial selection procedure wasn’t legally binding and that since the test event spot was a non-nominative one – meaning it belonged to the federation, not to the athlete who earned it for the federation – there is no [International Gymnastics Federation, the governing body of competitive gymnastics] rule in place that says the TTGF had to select Williams for the spot based on her worlds finish. This seems to be a topic of confusion for most reporting on this event in Trinidad, but even though the TTGF had originally decided to select an athlete based on worlds finishes, its directors and decision-makers had every right to change their minds.

Lasana Liburd, the sports journalist who heads biting news and sports site Wired868, which Hopkins suggests is a “pro-Williams publication”, took issue with The Gymternet's understanding of the situation. The claim that “no other successful, experienced federation selects gymnasts based on a single score six months in advance” is untrue (the United States selects its gymnasts based on a single trial event), according to Liburd.

But more importantly, Liburd said, the TTGF's decision was legally binding, as it was a written agreement and not a mere “promise”, as Hopkins's post implied. Hopkins maintains, however, that in her experience, situations like this happen all the time.

‘These are the facts of the story’

The Gymternet post listed several facts related to what the author calls “one of the most ridiculously juvenile fights in gymnastics history”. William's coach John Geddert had written in a report to the TTGF that Williams was struggling in training due to a sore ankle. The TTGF allegedly attempted to reach him for clarification, but said his response time was slow. As the International Gymnastics Federation rule states athletes cannot be withdrawn less than 24 hours before the qualification date and that deadline was fast approaching, the TTGF went ahead and pulled Williams (though the post didn't weigh in on whether proper procedure was followed, and Geddert claims he never received the TTGF's calls).

Geddert left unexpectedly from the Olympic Test Event in Rio due to family reasons. Williams’ legal team attempted to fight the decision in vain (and she had no recourse through the International Olympic Committee's Tripartite Commission). Dick competed in her place and qualified for the Olympics, and the Trinidad and Tobago Olympic Committee decided to support the TTGF's choice of Dick (which the TTOC later admitted they did under duress).

Hopkins defended her summary with the following:

These are the facts of the story. Obviously there’s a lot more woven throughout, and there is a long history of the TTGF’s close relationship with Dick that has led to shady dealings and preferential treatment, but this is the bare bones list of what happened, plain and simple. The situation is seemingly innocent up close – gymnast struggles in training, federation decides she should be replaced, new gymnast comes in and everything works out in the end. Of course, it’s horrible for the original gymnast set to compete, but that’s life […]

But to Trinidad and Tobago netizens, the post seemed to misunderstand that the issue isn't about a squabble between two gymnasts wanting to go to the Olympics and there being only one spot, but has to do with the TTGF's decision and whether it followed due process.

Or, in the words of one social media user who I spoke to and who wished to remain anonymous, “it is about cronyism, nepotism and a startling lack of transparency within the gymnastics federation.” The source was also of the opinion that in many instances — not just gymnastics — the primary interest of sporting officials in Trinidad and Tobago lies in leveraging athletes’ talents to jockey for money, in the form of trips and funding.

Dear TTOC, stop hiding behind the [International Gymnastics Federation], grow some balls and send NO ONE. We'd respect you a lot more. True congratulations would then be in order for Azerbijan, the next ranked country but it would demonstrate to your constituent associations that we had some integrity and moral fibre and that we will not tolerate the underhand tactics that prevailed in this selection. Oh wait! I forget, in TnT those are four letter words.

It's about corruption, not Williams or Dick

I'm sure some will comment about how Marisa is the devil and the TTGF broke every rule ever, but there's a reason for the TTGF's decision.

It is worth mentioning that many netizens have been very careful to call out bad behaviour and steer clear of bashing Dick. In fact, even as Wired868, which has followed the story closely, attempted to sort out the timeline of events and uncover the truth about the TTGF's process, it acknowledged Dick's talent and achievements.

For Trinidad and Tobago, this debacle has mushroomed into much more than whether Williams gets to go to the Olympics. The bigger issue is alleged corruption in sport. Even under the hashtag #ThemaOrNothing, which at first glance could appear to be anti-Dick, most of the commentary centred around dissatisfaction with the TTGF board and concerns about poor governance:

In a television interview with sports reporter Robert Dumas, Williams said both she and Dick “were just pawns in the TTGF's game” and she does not blame Dick for what happened. Williams made it clear that if their roles were reversed, “in light of how the decision was made and the injustice that took place”, she would have stepped down — but she also emphasised that she doesn't endorse any hate campaign against Dick. To her, the issue is not about “Team Marisa” or “Team Thema”:

People are missing the bigger picture. This is a situation in which a federation has been unjust, they have been absolutely biased, and […] I have been able to open the eyes of the public to the struggles that some athletes experience on their journey toward their goals.

Hopkins’ post concluded that “the story here is not one of conspiracies or villains. It’s one of conflicting interests in a situation where not everyone can get what they want.” But when it comes to corruption, Trinidad and Tobago netizens are intimately familiar with conspiracies and villains — and social media gives them the power to speak out.