#JusticeforJisha: India Protests the Rape and Murder of a Dalit Woman 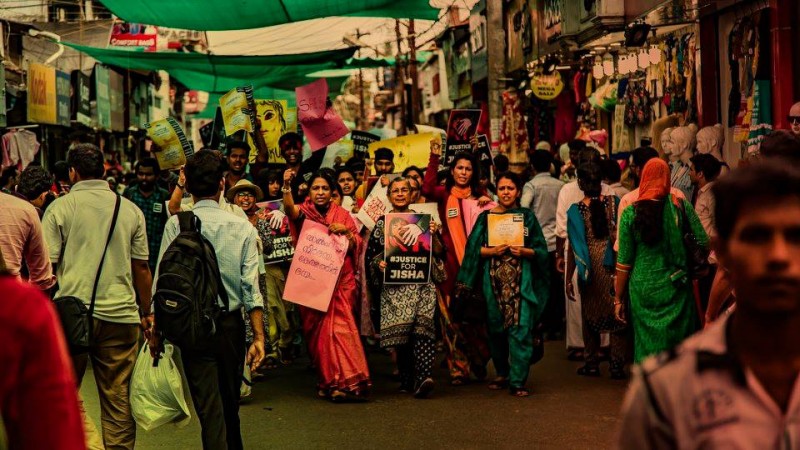 The brutal rape and murder of a 30-year-old Dalit law student on 28 April in south India's Perumbavoor municipality in Kerala has sent shock waves across India. The postmortem on the victim, who has been named only as Jisha in the media, confirmed she was raped, stabbed 38 times, including two deep wounds on her chest, and her intestines were pulled out of her body.

The depravity is reminiscent of a violent gang rape in South Delhi that shocked the nation in December 2012. Jyoti Singh, a 23-year-old student, was raped, beaten and tortured on a bus, then thrown out onto the street, naked and bleeding. Singh, who was being referred to as Nirbhaya, or the “fearless” one, in the media, later died of unsustainable injuries.

Six days after Jisha's murder, Kerala state police have so far failed to arrest anyone. The case is quickly becoming political, with Kerela’s opposition party, the CPI(M), blaming the United Democratic Front-run state government for the lack of progress. Assembly polls are scheduled to be held on May 16, and the National Human Rights Commission has taken suo moto cognizance of the incident. The police had arrested a suspect from the city of Kannur, but his fingerprints did not match with what the police had gathered from the crime scene.

Since reports of the horrific incident started pouring in from different media outlets, public outrage has been palpable. Many participated in protest marches organized in different parts of Kerela. Activists and students came together to voice their anger and discontent over the dismal state of affairs regarding women’s security and rights in India.

Shehla Rashid wrote on Kafila, a blog that critiques politics and media:

You will not get justice because we are quick to blame the rape on everything, but its real cause. We are ready to blame the rape on the dress and choices of women, on poverty, on alcohol, on chowmein, on mobile phone and other absurd things, but not on patriarchy, feudalism, commodification of women by capitalism, on caste, on our society.

Mainstream media stands accused of not giving enough screen or print space to Jisha. Some have theorized this has to do with the urban-rural divide as well as caste-based discrimination, whereby national grief and mourning is selectively reserved for the urban and upper caste populace.

No solidarity march, no candles, no protests march, no takers of #Dalit Body #JusticeForJisha #ShameonKerala pic.twitter.com/73sg25WHCk

For people questioning why #JusticeforJisha is not making headlines like Nirbhaya – She is a Dalit woman.

Dalit means “oppressed” and is the self-chosen political name for castes historically considered “untouchable” within the Hindu caste system. Discrimination against Dalits, while prohibited under Indian law, remains a common occurrence – crimes against Dalits rose 245% in the last 10 years.

‘Don't Rest In Peace, Haunt us, Burn us, In shame’

Social media was rife with demands of #JusticeforJisha. There are 34 Facebook groups dedicated to the cause as of now, and the hashtag trended on Facebook. While it wasn't trending on Twitter, the platform was nevertheless inundated with tweets drawing attention to the case.

Even after 5 days the police seems to have no clue..why not? Not interested in solving the case? Not important enough? #JusticeForJisha

Girl!
Whatever be your name,
Don't Rest In Peace,
Haunt us,
Burn us,
In shame.#jisha #JusticeForJisha #Kerala #shame

Jisha stands for Dalit rights & for women rights in this country. Patriarchy needs to die. It is a cancer, so is casteism. #JusticeForJisha

The blogger at Cloud Nine penned a poem for Jisha:

Ban the documentaries, hang the dogmas
Release the juveniles, change the laws
That doesn't change is you and me.
Shame!

Jisha's murder didn't happen in isolation, and so social media commentary has also touched on many issues, including patriarchy, masculinity, police inaction, rape culture, victim blaming, Dalit rights and women's rights. One can only hope that all sectors of Indian society come together, so that there is an end to the injustice and women like Jisha and Nirbhaya never again have to endure such violence and suffering.