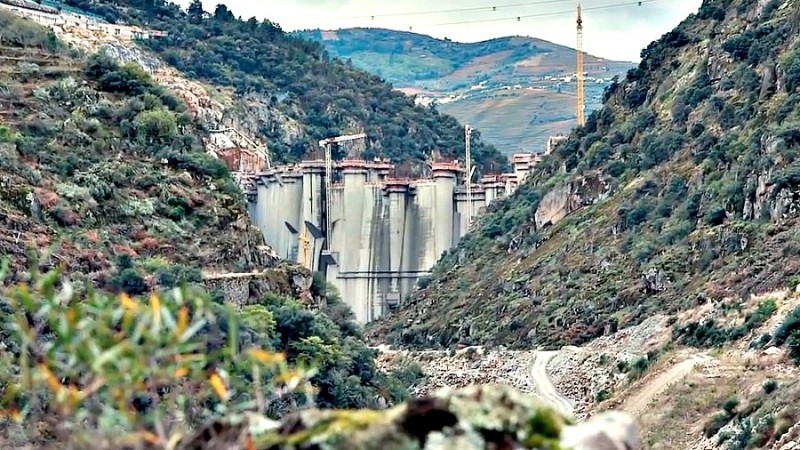 The new Tua dam in its final stage of construction. Screenshot from The Last Days of Tua documentary.

A gigantic concrete wall 108 meters high, which will eventually dam the Tua River in the northeastern region of Tras-os-Montes, Portugal, is in its final stage of construction. It's located in the Alto Douro Wine Region, classified since 2001 as World Heritage by UNESCO.

The hydroelectric dam has been under construction for several years. The government says the dam will help alleviate Portugal's heavy dependence on imported energy as well as reduce greenhouse gas emissions and create 4,000 jobs (albeit temporary ones).

But environmentalists don't think the benefits outweigh the costs. In 2013, various organizations came together to create a platform called “Save Tua” to protect the Tua Valley. Members warn that this dam will bring about an “ecological disaster, destroying rare ecosystems and farmland to flood about 400 hectares of olive groves, vineyards and protected habitats”.

Alto Douro is the oldest wine-making region formally demarcated as such by a government, having received the official designation in 1765. Besides being a UNESCO World Heritage Site, it is an area recognised for producing high quality wine. Farmers — mainly young people who decided to stay in the area and invest in the production of wine — are unhappy with the whole situation. “The dam is not going to bring anything, nothing”, says Pedro Almeida, a wine producer who appears in one of five documentaries made by Jorge Pelicano for the Save Tua platform:

The partly privatized companies behind the dam

On the right bank of the Douro River, in a territory also known as the “Hot Lands of the Northeast”, is the Tua River, a tributary of the Douro River. This fertile earth, one of the main tourist destinations of Portugal for mountain sports, is now threatened by the hydroelectric dam being erected at the Tua's mouth.

The construction carries the seal of Energias de Portugal (EDP), one of the largest energy companies operating on the Iberian Peninsula, home to some of the most expensive energy in Europe. The company was for many years a monopoly, and as Deputy of Parliament Mariana Mortágua has stated:

In Portugal, every winter, there's an increased mortality rate as a result of the cold. Houses are poorly insulated, and a lack of money means there's no option to turn on the heat. Austerity and excessively high rents in energy kill that option. We have the most expensive energy in Europe (prices before taxes), a business that gives EDP annual profits of around one billion euros.

EDP has undergone successive phases of privatization since 2011, when Chinese group Three Gorges bought a 21.35% stake. An audit of the privatization by the Court of Auditors found later that “the state itself may not have assured the national strategic interest in the sale”.

Three years later, the company that owns the Portuguese electrical infrastructure and is responsible for transporting energy in the country, Rede Eléctrica Nacional (REN), was also partially privatized. The government sold 11% of its stake for a sum of 157 million euros. Critics said the privatization, alongside that of EDP, leaves the consumer hostage to the private sector's profits.

These are the two companies that are preparing to finish the Foz Tua dam. The project isn't only plagued by environmental fears. Labor inspections carried out by the Portuguese Authority for Working Conditions found that the dam's construction workers were undertaking highly risky work, due to the lack of safety measures.

The dam will flood some of the land near it, and those affected will be compensated and relocated. But the consequences likely won't stop there. The humidity created by such a large amount of water stored at the dam could change local environmental conditions, jeopardizing local agriculture.

The subject is a sore spot for the wine sector in Portugal. A famous wine brand from Alentejo (region in south Portugal) called Esporão, which also has business interests in Douro, became one of the active voices of the campaign “Save Tua, protect the Douro”

The dam also spells the end of one of the most emblematic railway lines in the country — the Tua Railway, which will be partially submerged — that contributed greatly to the growth of tourism in the region.

‘We do not need new dams’

EDP says at the most the dam will produce around 6% of the country's total energy. That's a figure that various groups refuted early on. The Foz Tua dam is part of the National Dam program, a government-funded project to build new dams. According to the National Association for Nature Conservation, as well as environmental NGOs GEOTA, LPN and COAGRET, the entire National Dam program will only produce 0.5% of the country's total energy, with the Foz Tua contributing 0.1%.

The association also argues that the project, when completed, could lead to the degradation of agricultural soils, water quality, landscapes and specific ecosystems of the region:

Stopping the Foz Tua dam now is 30 times cheaper than letting it advance and paying the subsequent costs of a useless and very expensive energy supply. Given that hydroelectricity is an important part of the national energy mix, we already have 67 large hydropower plants, 10 of which are equipped with pumping systems; many existing dams are being or could be retooled to increase production. We do not need new dams.

The National Dam program could cost the government between 16 billion to 20 billion euros, which its critics say is a poor investment because private shareholders, not the people through the government, will be the one collecting the profits.

On the other side are the proponents of the project, such as the then Prime Minister Jose Socrates. At the start of the dam construction, he argued that while projects like the dam and other developments like a new airport or a bullet train are expensive and perhaps controversial, they are necessary:

The problem of Portugal was that all these controversial developments weren't built. That was the mistake we made for too long.

Dam opponents say such an argument ignores the many construction projects that have been built, despite their questionable utility. For example, the stadiums built for the Euro 2004 football competition (a few of which are now almost abandoned), or the number of motorways built that put Portugal well above the average when it comes to the amount of infrastructure of this type that is considered necessary.

Ultimately, the efforts of associations and a large number of citizens to thwart the advance of the dam go against UNESCO's own stance on the matter. In a preliminary report, it concluded that “the construction of the Foz Tua dam does not endanger the classification of the Alto Douro Wine Region World Heritage Site”. That isn't exactly how people on the ground whose livelihoods depend on the land see it, as seen in the Save Tua documentary series.

For many, resisting the dam is a lost cause. For others, the struggle ends only on the day that water irretrievably submerges the land. However, one thing is for sure: this protest seems to be the first fight aiming to eliminate a National Dam Program that will supposedly “address the major issues in Portugal“, as António Mexia, chairman of the Board of Directors of EDP, once claimed.

The Save Tua platform has created a petition to be sent to UNESCO and it can be signed through their website.