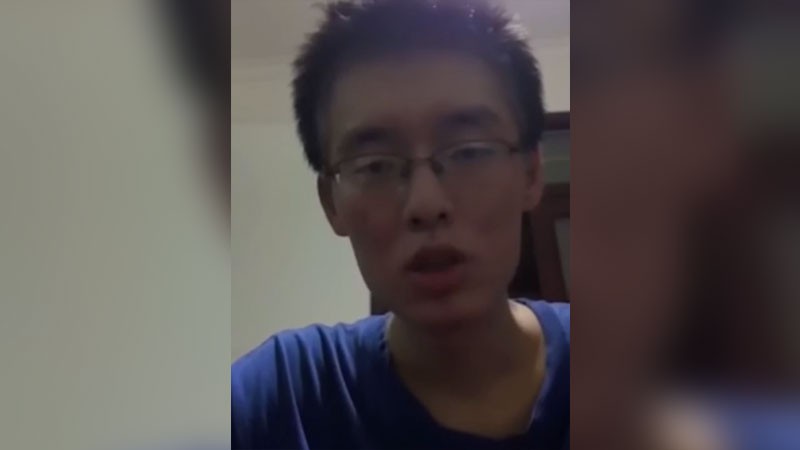 Wei Zexi talks about his aspiration to live. Image: YouTube

“I do not want to die. I haven’t seen the result after 21 years of struggle and effort, and I still dream of seeing this world,” Wei Zexi said in a short video before his death. “I cannot imagine how my parents would carry on with their lives, if I were to die.”

Wei, a 21-year-old college student in Xi’an, the capital of Shaanxi province, had for years suffered from synovial sarcoma and both chemotherapy and surgery had failed.

In desperation, Wei and his parents searched on Baidu, the dominant Internet search engine in China, and found the website of the Second Armed Police Hospital in Beijing. Eventually Wei spent 200,000 yuan (the equivalent of 30,900 US dollars) for a phony treatment that, in the end, only exacerbated his condition.

Only later did Wei and his family find out that the search result was actually Baidu's promotional advertisement under the company's Position Auction System. Moreover, the treatment he received was not provided by the military hospital but by a third party, a subcontractor of the hospital's surgery ward.

Wei passed away on April 12 and the Chinese public was enraged.

In response, the Cyberspace Administration, China's Internet regulators, announced that it's launching an investigation into Baidu, as did the National Health and Family Planning Commission and departments of the Central Military Commission file a joint probe into the hospital.

“I did not know how sinister Baidu was at the time,” Wei said, explaining how he fell into the same medical trap that has snared others: a post on Zhihu, an ask-and-answer online community.

The public, however, have criticized Baidu for its position-auction system and for providing misleading and false search results.

On Baidu, usually the first pages of any search result feature promotion links, and companies that pay more get higher placements.

But not everyone is aware of this auction system, or how dangerous it can be to take promoted search results at face value. Wei was the victim of one such misleading search result. He and his family followed the link from the search engine, he visited the hospital’s website, which claimed it had imported a biological therapy from Stanford University called “dendritic cell and cytokines-induced killer cells”, which it claimed could prolong a his life for up to 20 years.

The hospital website did not reveal that the treatment was outsourced to a privately run medical company affiliated to Putian—a network of medical entrepreneurs who control thousands of private medical institutions in China.

Updated 10 am May 5 2016: “Stanford University has no relationship to this case or to the hospital. We have no further comment.” said Becky Bach, who is in charge of Media Relations at Office of Communications & Public Affairs at Stanford University School of Medicine, told this author in an e-mail.

In other words, the treatment advertised on Baidu is a scam, and the search engine did not bother to verify the advertisement's claim, before displaying it to people searching for medical care. As Wei did not have professional medical knowledge, he believed the claim of hospital and made a wrong choice that cost him his life.

In China, spreading rumors online is a criminal offense, but police seldom fault Baidu for spreading scams in its advertising business.

In a Zhihu post before he died, Wei said he hoped his story would prevent others from making the same mistake he did. “Otherwise it will be a heavy price for patients suffering from tumors,” he warned.

The Growth of Putian Faction Hospitals

Putian is a southeastern city in the Fujian province, where the private medical business has been a pivotal industry since the 1980s. The faction mostly consists of “four clans”—the Chens, Zhans, Lins, and Huangs—who currently dominate 80 percent of all private hospitals throughout China.

Many businessmen in Putian work as amateur doctors or so-called “barefoot doctors” who emerged in the Cultural Revolution and do not have professional medical backgrounds. “Curing a hundred diseases” is one of these doctors’ favorite marketing slogans.

At the onset of the Reform and Opening in 1978, many hospitals did not have sufficient state subsidies to operate. As a result, these doctors in Putian seized the chance and filled the funding gap by offering investments, as well as additional doctors and medical devices, entering into profit-sharing arrangements with the hospitals. It was the dawn of a new era of medical marketization. In the 1990s, when China started allowing the private sector to invest in public hospitals, the country's medical industry became massively profitable.

In 2000, the authorities prohibited private investment in public hospitals, but lifted the ban on establishing private hospitals.

Now there are nearly 8,000 Putian private hospitals, making up more than 70 percent of the whole national market.

Putian-affiliated hospitals often claim that they have the world’s most advanced medical treatment and the country's most experienced doctors and can cure any kind of disease.

According to Tencent news, Putian faction hospitals contributed 10 billion yuan (the equivalent of 1.6 billion US dollars) to Baidu's advertising revenue in 2014. This January, Baidu came under fire for flooding online communities with false claims and advertisements for unlicensed hospitals.

Many patients like Wei have been swindled at high prices.

Who Should Be Responsible?

Back in 2006, the Oriental Outlook, a magazine affiliated to state-owned Xinhua News Agency, published an influential report saying Lang Xianping, a well-known Chinese economist, had revealed the inside story about Putian faction hospitals on his TV show. Mysteriously, the television program was soon taken off the air.

“We are those who do not have power and merely can call on those who have power to get involved in [investigation into these hospitals],” Lang said at the time.

Ren Yi, a postgraduate of John F. Kennedy School of Government at Harvard Kennedy School and former visiting researcher at Fairbank Center at Harvard University, argues that the hospital at the center of Wei's story deserves to take main responsibility for this scandal:

The Second Armed Police Hospital is a professional medical institute, and it should be restrained by conventional medical ethics. It should be supervised by relevant laws and regulations on public sanitation. It should have the professional knowledge of effectiveness of treatments and closely or fully know it. For the above-mentioned reasons, it still chooses to outsource such medical treatments and endorses such treatments to make a profit. So it should bear the most moral responsibility.

“We're just ordinary people, and we don't want to get involved in any dispute or draw [public] attention,” Wei’s parents said in an exclusive interview with Caixin. “We just want to live a quiet life.”