Trinidad and Tobago Is Sending a Gymnast to the Olympics For The First Time, But It's Not Who You Think 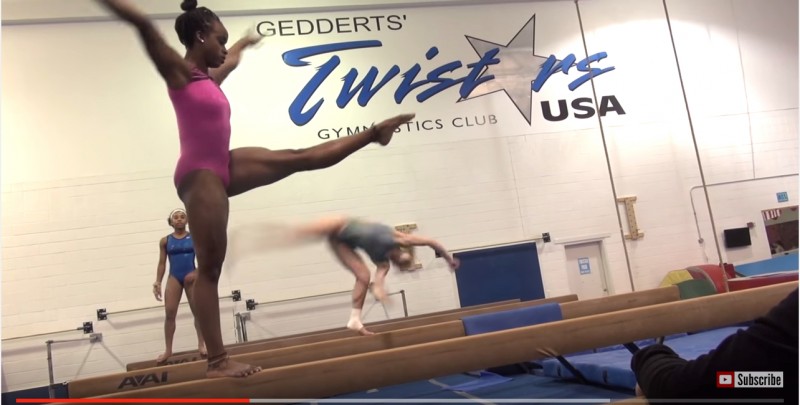 Screenshot of a YouTube video of Trinidadian gymnast, Thema Williams, practising at her coach John Geddert's gym in the United States.

The controversy over which gymnast will eventually represent Trinidad and Tobago at the 2016 Summer Olympic Games in Brazil has had more twists and turns than a gymnastics routine.

A quick recap: Trinidad-born gymnast Thema Williams, who was announced as the country's Olympic pick for the Rio Test Event, was suddenly replaced by Canada-born Marisa Dick, who holds dual citizenship. The Trinidad and Tobago Gymnastics Federation (TTGF) board claimed their decision to replace Williams — allegedly because of because of an injury she had sustained — was in her best interest, but the reality is that Williams had been put before a disciplinary committee a few weeks prior, over a topless photo she posted on Instagram. Ironically, a topless photo of her competitor, Dick, surfaced shortly thereafter on Snapchat.

There are many who believe Williams’ forced withdrawal was illegal; in fact, her attorney tried to challenge the decision before her replacement took the floor in Rio, but to no avail. However, since her untimely homecoming, Williams and her team have served legal notice of their intention to seek “damages, declarations, and relief for all of the wrongdoings” from the TTGF. Wired868, the sports site that has been devotedly covering developments, noted:

According to Williams’ contract with the local gymnastics body, she could only have been removed from the competition by the head of delegation after consultation with her coach, Geddert, and relevant medical personnel.

Marquez [the TTGF president] confirmed at a press conference […] that the TTGF did not tick all those boxes but countered that the body was forced at act swiftly in the interest of the sport, after concerns about Williams’ health.

The website also alluded to a conflict of interest:

A posting on the International Gymnastics Federation (FIG) website, which was last updated in 2015, listed Dick’s coaches as Ovidiu Serban and Ricardo Lue Shue with Anita Pelletier as choreographer.

In her legal action, Williams is claiming, among other things, a breach of the athlete’s agreement, unfair treatment, bad faith, bias, and consequential damages. Her lawyers are asking that she be confirmed as Trinidad and Tobago’s representative for the 2016 Olympics, that the Trinidad and Tobago Olympic Committee (TTOC) declare the TTGF’s actions as unfair, and that damages be awarded to the value of a scholarship to the University of Michigan (which Williams turned down to pursue her Olympic dream).

Meanwhile, the TTOC president, Brian Lewis, said that the organisation had received confirmation of the TTGF’s sole qualifying spot for the Rio competition. Since Williams was pulled from the test event, the only eligible gymnast to take the spot is Dick. The local Olympic body has until May 9 to decide if they will take up the berth.

Today, however, in an announcement that many netizens did not anticipate, the TTOC announced that Dick would be the gymnast to go to the Rio games.

It was common knowledge that the higher scoring gymnast at the Glasgow Games would represent the country at Rio — and that gymnast was Williams — raising a slew of questions about whether Dick always knew that she still had a chance to compete, whether the international gymnastics body was culpable in any way, and whether Williams still had a chance to represent her country.

That chance to fulfil her Olympic dream is what most social media users were primarily concerned about — and there still seemed to be a sliver of hope. Wired868 interviewed Canadian sports attorney Dr Emir Crowne, who said:

‘There does exist a chance of Thema still going to the Olympics. There is a committee called the Tripartite Commission; and in every sport they deal with exceptions to the rule…The deadline to file that application was January 15. But they do allow late applications in exceptional circumstances. And I think it is safe to say that this is nothing short of exceptional circumstances.’

The International Olympic Committee’s Tripartite Commission, accessible through the Trinidad and Tobago Olympic Committee, would have been Williams’ final hope, until the TTOC president revealed that:

The FIG [the international gymnastics body] has confirmed today that no name change or replacement is possible at this stage […] Any approach to the Tripartite Commission can only be made through the auspices of the TTOC with the endorsement of the Trinidad and Tobago Gymnastics Federation.

Some bloggers, however, were always sceptical about the TTGF being made accountable for its actions. According to the blog Square Peg (Round Hole):

It’s clear that – at best – the TTGF misstepped all over the place in their handling of this matter. They also misstepped in their assumption that this incredibly blatant… screwup… would go unnoticed by wider society. At this point, it would be less of an embarrassment for them to step down and avoid tarnishing T&T’s fledgling involvement in Olympic gymnastics any further.

Of course, that would require them to be more concerned with protecting the sport than with pushing their own agenda.