Trinidad and Tobago Has Qualified for Gymnastics in the Olympics, So Why Aren't People Happier About It? 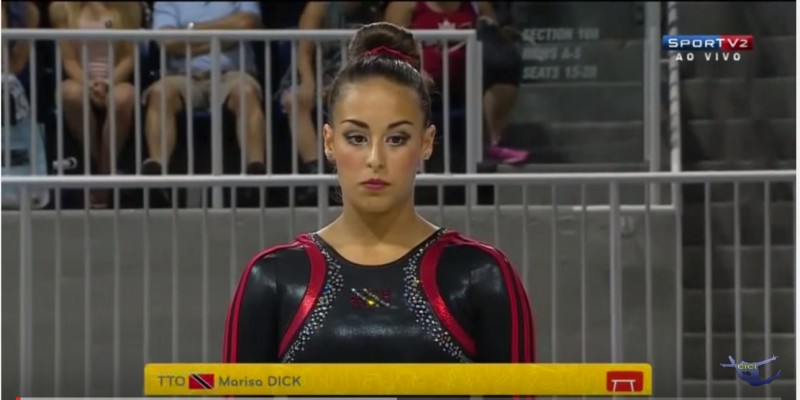 A screenshot of a YouTube video of Marisa Dick, Trinidad & Tobago's gymnastics representative at the 2016 Olympics, competing at the Pan American Games in Toronto in 2015.

Marisa Dick, the Canadian gymnast with familial ties to Trinidad and Tobago, has been finalised as the twin island republic's representative at the 2016 Summer Olympics in Rio de Janeiro. It is the first time in history that the Caribbean nation will be represented in the sport of gymnastics at this level, but the road to get there was paved with controversy.

Even the president of the Trinidad and Tobago Olympic Committee (TTOC), Brian Lewis, admitted that “this is not a very happy day for the TTOC, the Olympic movement and the members of the games committee”:

This circumstance and situation is a dark cloud over the Trinidad and Tobago Olympic movement […] It was one of the most gruelling and difficult situations that the TTOC has ever found itself in. We could have made decisions on the basis of purely our emotion and anger but that wasn’t the responsible legal position to take.

The circumstance that Lewis is referring to is the cut and thrust that has been taking place ever since a topless Instagram photo of Thema Williams, the Trinidadian gymnast who ranked highest at the Glasgow Games and was earmarked to go to the Gymnastics Test Event in Rio, was anonymously brought to the attention of the Trinidad and Tobago Gymnastics Federation (TTGF), the sport's local governing body. Williams was placed before a disciplinary committee; ironically, shortly thereafter, a topless photo that Dick posted of herself on Snapchat was also brought to public attention.

With disciplinary action against both gymnasts still pending, the TTGF was under public pressure to announce its pick for the Rio Test Event, which took place in mid-April. The TTGF chose Williams — and then pulled her as the representative (allegedly without due consultation with either the gymnast or her coach) — flying in Dick to compete in her place.

There was an immediate public outcry and much legal wrangling; there were even calls for the TTGF board to step down. In the end, though, some feel that it was all for naught — at least in the sense that Williams, the higher-ranking gymnast who many netizens believe deserved to go to Rio, has had her Olympic dream crushed. On the other hand, it is a historic moment for Trinidad and Tobago — never before has the country been represented in an Olympic gymnastics event.

It is clear, however, that much of the decision-making has been motivated by legalities. Wired868, the sports website that has been closely following developments, reported:

The choice, for the TTOC, was between Dick or nobody. […]

Lewis revealed that, in the last two weeks, he received a pre-action protocol letter from the Trinidad and Tobago Gymnastics Federation (TTGF) — after he tweeted that the TTOC would not rubber-stamp the TTGF’s wishes — legal warnings from Williams’ attorneys and the International Federation of Gymnastics (FIG) and threats of financial boycott from the public.

It appears, though, that even while the TTOC is implying that its hands were tied over the decision to endorse Dick, the local Olympic body may very well be considering taking legal action against the TTGF in order to determine whether it “has infringed the TTOC constitution, the Olympic charter, and the International Olympic Committee’s code of ethics in respect of their duty to be fair.” 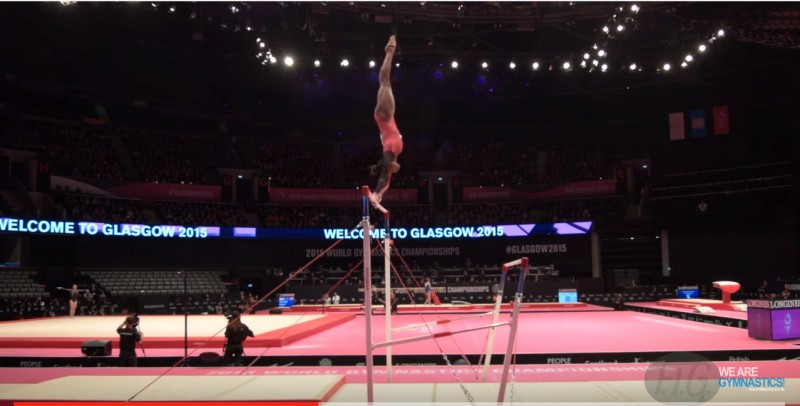 Screengrab of a YouTube video of Trinidad & Tobago gymnast, Thema Williams, competing on the Uneven Bars at the 2015 qualifiers in Scotland.

It remains to be seen, however, whether it is worth taking any legal action against the TTGF, when the FIG (the international gymnastics body) has said that the TTGF was not in breach of proper procedure at the Olympic Test event. That has not stopped the public criticism of the local gymnastics federation. Williams’ coach was also very critical of the TTGF, saying in a public post on his Facebook page:

What a shameful moment in sports. If there were ever a blatant display of unethical and corrupt sports management, THIS WAS IT! The TTGF showcased their 10 foot tall and bullet proof, in your face, we do as we please, the hell with who gets hurt in the process, mentality for the world to see. What a epic moment for the proper message to be sent in response to their narcissistic and unthinkable actions. What an opportunity to show the world that honesty, integrity and RULES do matter. What a moment to stand firm and tall. What a shame!

Ironically, it was allegedly Geddert's critical report of Williams’ performance in Rio — and his reference to an injury she had — that allegedly prompted the TTGF to replace her with Dick.

Twitter has been flooded with commentary about the issue and overwhelming support for Thema Williams. One Twitter user put out a quick poll:

Others were pleading — in vain, as it turned out — for the TTOC to step up:

@TTOlympic Please preserve whatever is left of the principles in this entire sordid affair. It is wrong what hpnd to #ThemaWilliams

One Twitter user was of the opinion that the TTGF made a bad decision on many levels:

Trinidad and Tobago just lost a great chance to medal at the this year's Olympics. Possibly a gold medal #ThemaWilliams

If #MarisaDick isn't “Trini enough”, was #ChrisBirchall when he scored our qualifying goal against Bahrain?#TeamTTO#i4tandt#themawilliams

…there was one who did not:

Who in #MarisaDick family pay for #ThemaWilliams to get axed at the last minute? Dick wasn't even training for the event!!

Some netizens were focused on the bigger implications of the controversy and hoped that it would lead to positive change in the sporting fraternity. Canadian sports attorney Dr. Emir Crowne tweeted:

Whatever the outcome, I hope the #ThemaWilliams matter is a catalyst for reform in how sports disputes are handled. #Trinidad #SportsLaw

Trinidad: Where corruption and personal interest always overpowers dedication and hard work. I'm so sorry, @ThemaY_Williams. You are a star.

Unfairness n injustice reign supreme in this country. I'm so sorry @ThemaY_Williams my heart is broken for u. U didn't deserve any of this.😔

They can take the moment away but they can't kill the dream.. We still stand with you @ThemaY_Williams