Hundreds of Chinese Schoolchildren Have Been Poisoned, But Their Affluent Families Aren’t Winning Them Much Sympathy 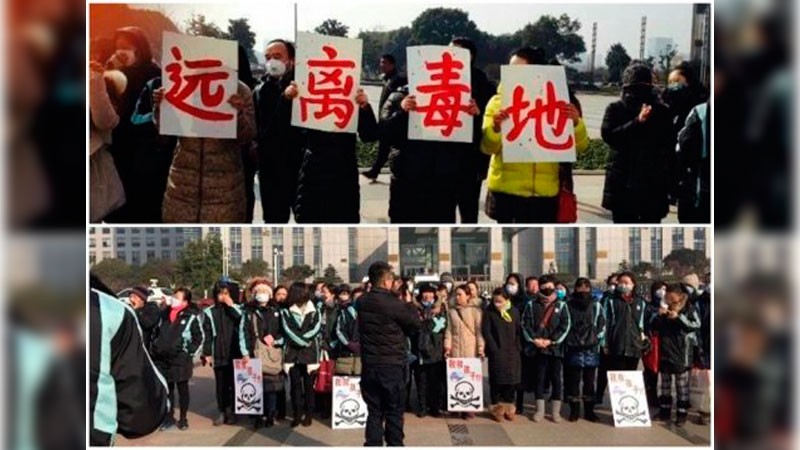 There's a public safety crisis in Changzhou, where hundreds of schoolchildren fell ill after exposure to toxic compounds. Unfortunately for the ailing kids, the public response has been largely unsympathetic, thanks in part to the affluence of the students’ families and their parents’ attempts to treat the incident like an “internal matter”.

The alarm of toxic land ran off after hundreds of school kids fell ill after exposing to toxic compounds in Changzhou. Yet, amid the public safety crisis, the public are not sympathetic to the victims as the elitist parents considered the incident an “internal business” rather than a public incident.

Doctors detected blood and thyroid abnormalities, as well as bronchitis, lymphoma, and leukemia, in more than 500 teenagers studying at the Changzhou Foreign Language School, an elite school for middle-class families. Many of the students soon developed symptoms including rashes, headaches, and coughs after their school moved to a new location in September last year.

The new campus is located near a former industrial site, where the soil and groundwater were contaminated with toxic compounds and heavy metals discharged from three chemical factories.

Parents of the sick teenagers are demanding that the school be relocated to a safer location, but officials and local authorities deny that the current health problems are related to pollution in the soil around the school.

The incident has exposed the issue of soil contamination in China. An official study by the Environmental Protection Ministry released back in 2014, indicated that 16 percent of the soil and 20 percent of the arable land in the country are contaminated. Facing enormous costs involved in cleaning up the pollution, both local authorities and developers are reluctant to invest in the endeavor.

According to local authorities in Changahou, the piece of “toxic land” believed to have harmed the schoolchildren has already been restored and rezoned as a residential and commercial district.

The parents of many of the affected students, however, are government employees and members of the Chinese Communist Party, and they have refused to treat the incident as a public safety crisis, rejecting interview requests by foreign journalists.

“This is our internal business and we should negotiate with the door closed”, the protesters said. Their protest strategy is designed to prevent them from being arrested on charges of “picking quarrels and provoking public disorder”, but it also means they have to rely on the authorities to correct the mistake.

Though the Central China Television did report on the incident on April 17, the state-own media outlet stressed that local authorities are seriously committed to solving the problem. Two days after the CCTV's report, an investigation team from Jiangsu province had collected air, soil, and water samples from the toxic land site for testing.

A week later, on April 25, the city government concluded that the air and food quality around the school were up to safety standards, but admitted that local authorities committed negligence in monitoring the progress of the land's restoration. Contrary to the findings of parents’ private blood tests, state investigators concluded that only 133 students experienced health issues, and the authorities found no evidence that these problems were related to pollution in or around the school.

Though they have advocated a “closed-door” approach to this crisis, the students’ parents are naturally unhappy with the state's findings, but they're finding little sympathy with the public, which has turned against them on class grounds. On Weibo, one of China's popular social media platforms, the majority of the comments on the reports about the “pain of middle-class families” are written with a critical tone:

They identified themselves as social elites and members of the establishment. Yet, without the protection of judicial independence, when they face injustice, they turn into trash and dust regardless of their social status and property. There is nothing to protect you.

You don't care about politics and believe that money can bring you a happy life. Then the reality slaps you on your face.

Parents, you've been cheated. You think, by containing the incident within Changzhou, you can save the faces of Changzhou's leaders from being criticized by the country and the world. You want to shut the door to protect the scandal from leaking outside the family. You give up your right altogether. You are really good citizens to save the corrupt and irresponsible officials.

You deserve such an outcome. Why are you still complaining? The leaders want your children dead and you should let them die.

Stupid adults. Unfortunate school kids. Let your country solve its own business. Foreign journalists gain nothing from reporting about you.

Similar sarcasm could be found in another news thread on Weibo:

The report has summed up the negative character of Chinese: fearful, cowardly, selfish, cover-up mistakes, and most importantly, they have failed to stay united. They used to neglect others’ misfortune, but when they become the victim, they keep complaining that no one is helping them.

The result is so far so good. At least people know what has happened and the reaction of the local government has informed us what we should be expected next time when similar things happen. Looking back, if the school is just an ordinary elementary school and the kids come from lower class, what would have happened? It is chilling just to imagine the result. For those of us who are not civil servants or government officials, who don't own multiple apartments or work in big corporates… what should we do?