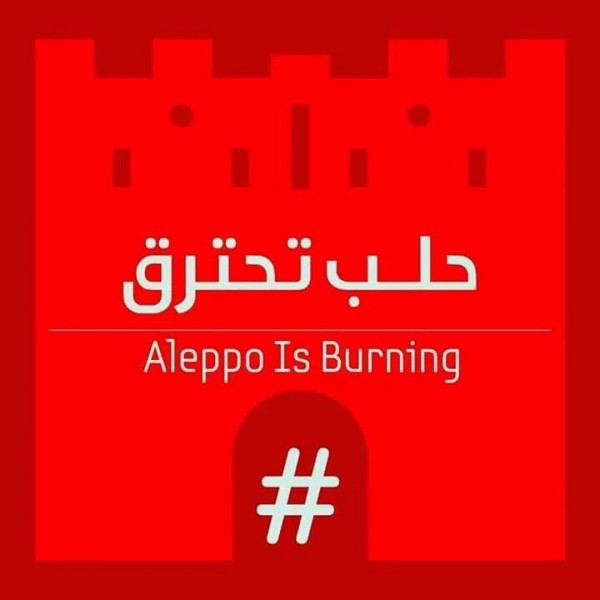 Aleppo, Syria's second most important city after the capital Damascus, is being “wiped off the map” as you read these lines. Hundreds of civilians have been killed over the past 11 days as activists and netizens raise the call for the world to pay attention to their plight.

A campaign is underway calling on supporters around the world to change their profile photographs on social media to red to show their support for ending the massacres being committed against civilians as Syrian government forces continue aerial bombardments on rebel-held areas estimated to house up to 350,000 people.

Only the Syrian air force and their Russian allies have the capacity to bomb Aleppo from above — and both deny obliterating Aleppo.

Photojournalist Hadi Al Abdallah, who is in Aleppo, provides harrowing updates from the city on a daily basis:

Warplanes are bombing civilian neighbourhoods in #Aleppo for the eighth day in a row!
29-4-2016
PH: @Khaledesa9 pic.twitter.com/15HlDhM33S

Just today he shares those photographs of an ambulance attacked in an airstrike:

On April 30, he shared this video of Assad's forces bombing Al Quds hospital in Aleppo:

VIDEO: CCTV footage of the moment al-Quds Hospital in Aleppo was targeted by Assad warplanes. pic.twitter.com/hUsji5sZSy

And tweets such as this, reporting airstrikes against civilian targets, have become routine:

On YouTube, Alabdallah shares this video [Graphic Content] showing the horror the residents of Aleppo have and continue to suffer:

He pleads with the world to watch it.

And that's what the world has been doing: watching the horror unfold in Syria.

Global Voices’ own Marcell Shehwaro, a resident of Aleppo, who has been sharing her own story and experiences in Dispatches from Syria: Marcell Shehwaro on Life in Aleppo, shares this telling photograph on her Facebook page: 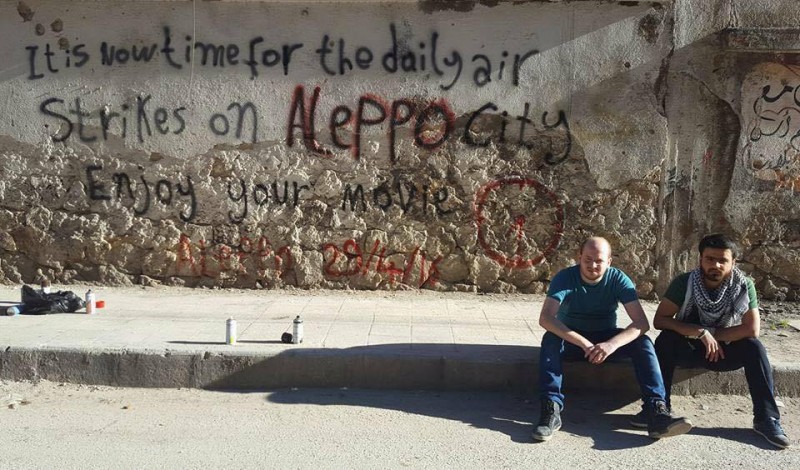 “It is now time for the daily air strikes on Aleppo city.
Enjoy your movie!” Photograph shared by Marcell Shehwaro on Facebook

Aleppo was famous as a trading and business city with the wealthiest merchants residing in it. It was also the industrial hub of Syria, hosting some of the biggest and most advanced pharmaceutical and textile factories.

The city, which is now in ruins, was also famous for its rich history, a witness of which was the Citadel of Aleppo, which stood strong in the heart of the City. It was home for the Big Umayyad Mousque, from the era of the Umayyad State around 700 AD, and many other religious and historical sites.

Aleppo used to be a true testament of the peaceful coexistence. Apart from its Muslim and big Christian populations, Armenians and Kurds, it was widely populated by Syrian Jews, who left the country in the years that followed the announcement of the State of Israel in 1948.

Assad's regime has been shelling the city on an almost daily basis for the past four years. Everything you read about above does not exist anymore. Some of it barely exists, but with the rate of continuous shelling that has been targeting the liberated (rebel-held) parts of the city, it is only a matter of time before every living soul, every monument, every piece of human history that this city once held, will be gone.

This revived campaign to destroy Aleppo, which witnessed a brief intermittent halt during the ceasefire agreed upon between Russia and the US, is being launched under the eyes and ears of the entire world, including Russia and the US, who seem to turn a blind eye.

One cannot help but think about the international political reasons behind such silence. People are filmed every day and videos are published. They are asking us for help. They need us to move so they can live, barely, as life in Aleppo has been anything but decent, with no electricity, no water, food or medicine, and with the regime shelling civilians from the air and ISIS slaughtering them on the ground. They just need us to share, tweet and stand in solidarity with them. We didn't hesitate to do that for Paris and for Brussels, why stop here?