Portraits From Nepal: Survivors Struggle to Rebuild a Year After the Deadly Quake 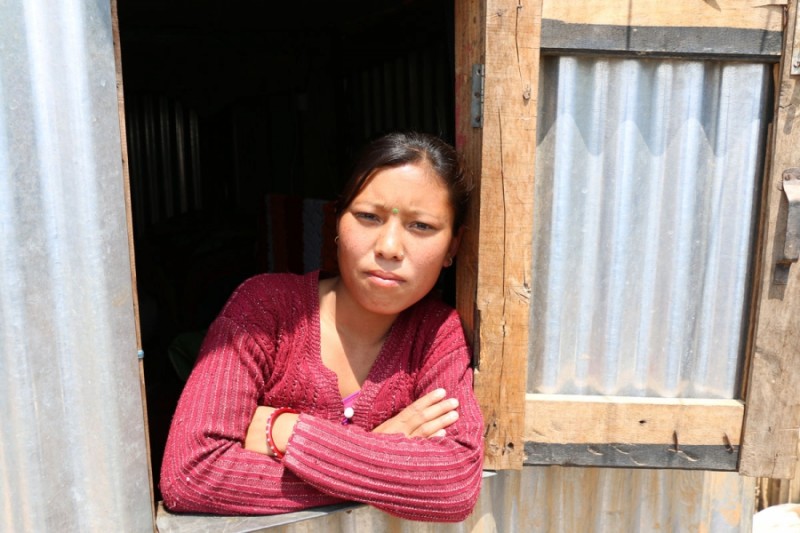 This article by Sonia Narang originally appeared on PRI.org on April 25, 2016, and is republished here as part of a content-sharing agreement.

As Nepal struggles to recover from the deadly earthquake one year ago, many of those who survived are living in makeshift tin shelters with no financial ability to rebuild real homes anytime soon. Here are the stories of people who lost their homes, livelihoods or access to basic needs in the disaster.

Many of the poorest families have stopped counting on Nepal's painfully slow government to assist them, and they're left with no other option but to make a new life in these flimsy shacks for a long time to come. 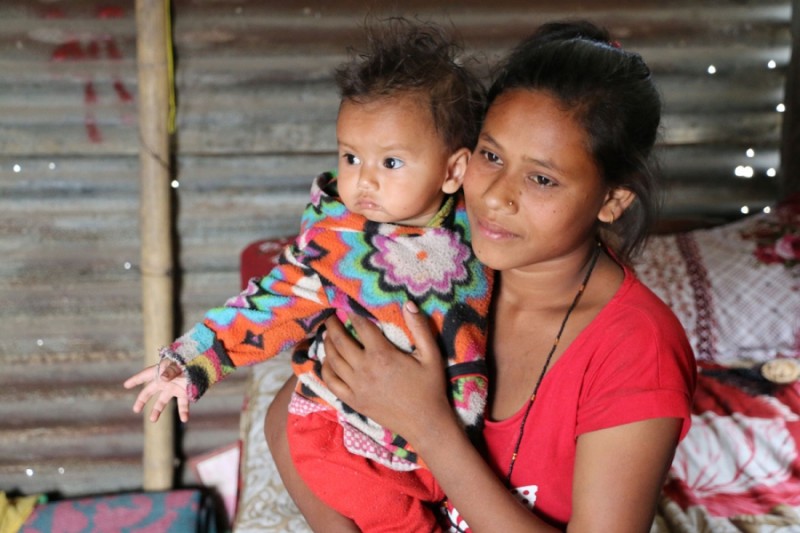 Sumina Pariyar, 17, holds up her 9-month-old daughter Unika in the small metal shack they call home under an overpass in Kathmandu. She was pregnant and living in one of the hardest-hit rural districts of Sindupalchok when the earthquake hit.

“It was extremely scary since I couldn't walk or run, as I was pregnant. My husband helped me out of the house while the ground was shaking and took me to a place that was safer,” she said. “The baby was big in my stomach, and it was shaking all the time. I thought I was going to die. We were out in the open space for very long.”

After the earthquake, her parents in Kathmandu were so scared, and didn't know if she had survived. Though they hadn't been on friendly terms since she had eloped with her husband as a teenager, they brought her and her husband back to Kathmandu and set them up in this shack.

“It was very cold and difficult to raise a baby here in this shack,” she said. “We had to rely on a fire and give the baby a warm oil massage to keep her warm. It was very dusty and polluted outside, but we had no money to move to a rented flat.” 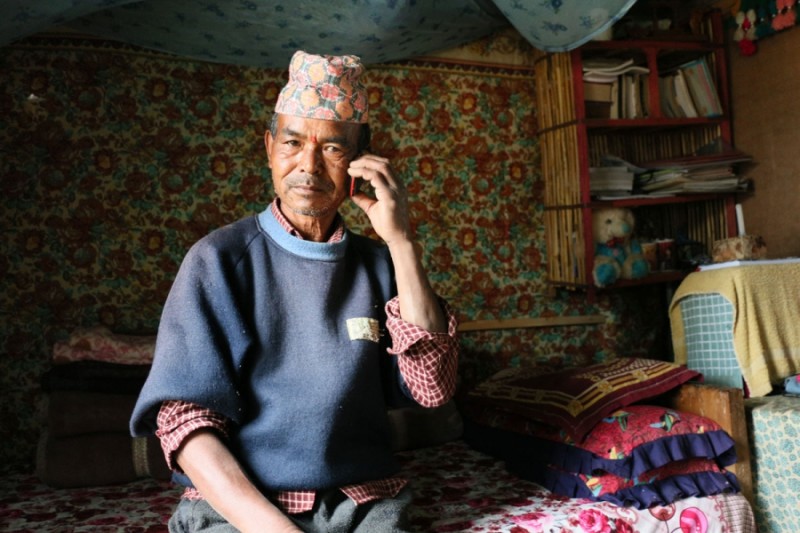 When Ratnaman Nagarkoti, 59, lost his house in the earthquake, he decided to take matters into his own hands and re-built a tin shelter for his wife and daughter. He used tin panels to build a roof and doors and constructed the shack in two weeks.

When the earthquake happened, Nagarkoti was tying his goat outside. “As soon as the earth started shaking, I lost the hope of life and thought I would live no more,” he said. “I was terrified.”

He built the first tin shelter in his village, and managed to get tin sheets despite the extreme scarcity of supplies after the earthquake.

“There’s no way we could make a real house, so we will have to live here. I feel depressed and desperate that it’s been one year, and we haven’t received government support to re-build,” he said.

Nepal’s government has offered families around $1,900, but hasn’t distributed it yet. “It’s not certain we will get it, and even if we do, it’s not enough.” 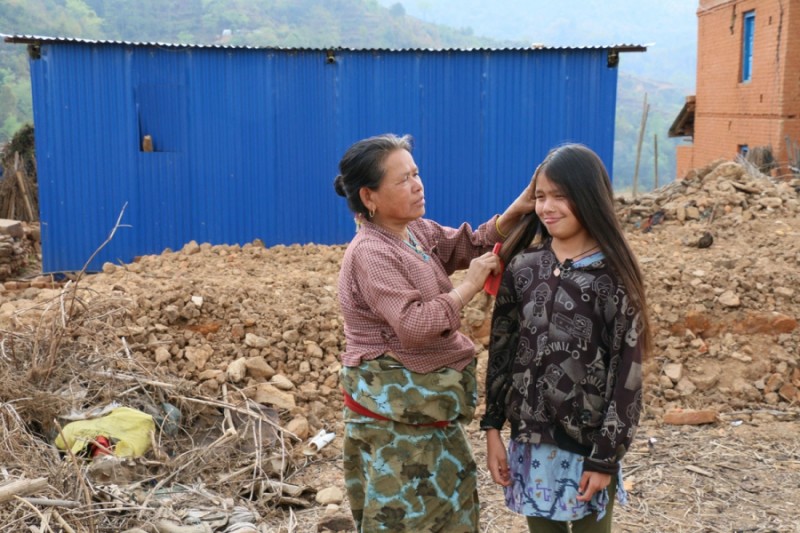 Sanukanchi Tamang, 48, and her youngest daughter, Devi, 12, stand in the rubble near their former home. Just a year before the Nepal earthquake, the family had pooled their earnings to build a new two-story house. But, it all came crashing down when the quake hit last April, and they were left with nothing. Other homes remain standing, but are uninhabitable due to major structural damage. The family will soon move into a donated one-room blue tin shelter where their former house once stood.

They hope to rebuild, but like many families who lost their homes, they just do not have the funds. The government has only given them about $140 so far, and offered a total of about $1,900. But, that's just a fraction of the estimated $10,000 cost to build a proper home. It could take her sons several years to earn enough money to rebuild. 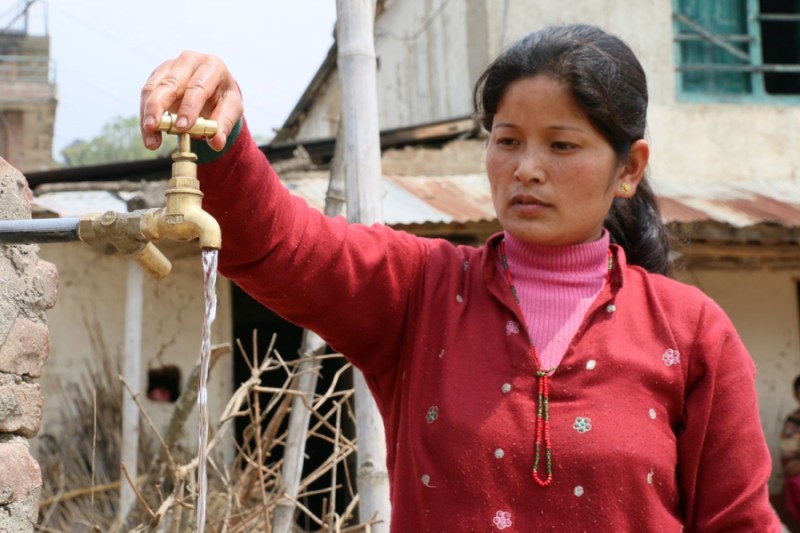 Ratna Ramtel, 29, recently became the first woman president of her village's water committee. Because women in Nepal are usually tasked with the chore of fetching water for the household, it makes a big difference to have a woman leader.

Ramtel helps local women understand how and when they can get their water from the public water taps. When the Nepal earthquake destroyed her community's water storage tank, it greatly affected women's lives.

Now, the village has a new, larger, earthquake-resistant tank that allows women like Ramtel to collect water more efficiently.

When the Nepal earthquake destroyed Prapti Tamang's two-story house, her husband was working in Qatar. Like 24-year-old Prapti, many women here have husbands doing jobs overseas. So, the women had to set up temporary homes on their own, with help from family and neighbors. Prapti's husband sends back earnings from his factory job, but it's not enough to rebuild a real house anytime soon. Construction costs have risen dramatically since they built their previous home several years ago. She says it will take them at least 10 to 15 years to save up enough.

Until then, Prapti and her 5-year-old son will live in this compact shack made of corrugated tin sheets and wooden planks. She says she feels insecure here, especially at night, because anyone can enter or break down the door.

“The women in this village are very scared,” Prapti said. “It's been hard to console my son, who lives in fear of another earthquake.”

Her husband will visit soon for his first trip back to Nepal in three years. 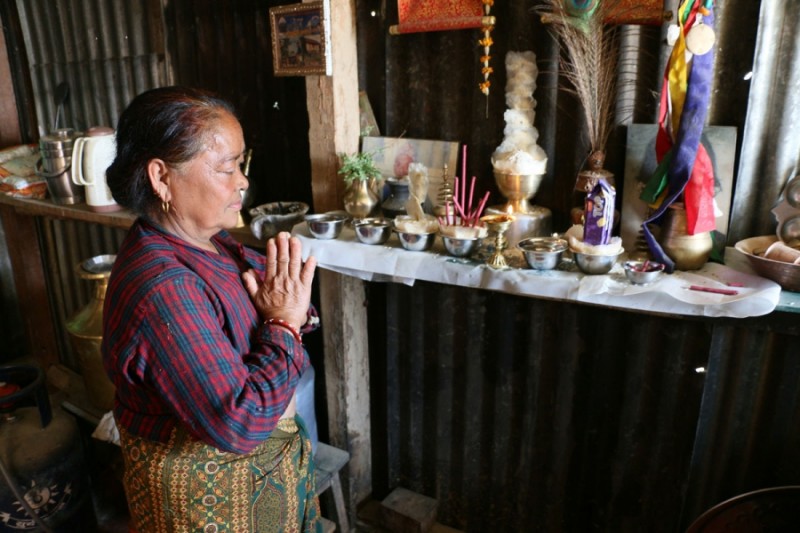 Lari Tamang, 57, prays in the makeshift shelter she lives in with her husband and grandson.

“When the earthquake came, I had gone to Kathmandu to visit a few Buddhist religious leaders,” she said. “I had just finished saying Namaste to all of them, and I was ready to sit down when I heard someone say, ‘It has come.’ Then, all of a sudden, everything started shaking from side to side, and that’s when I realized the earthquake had come.”

Tamang says she felt more pain seeing other people’s homes destroyed rather than her own.

But now that she’s lost the home her family built almost two decades ago, things are suddenly very difficult. She has to cook food outside, and there’s not enough water. She also feels insecure at night because the doors are made of flimsy tin.

“I used to save every penny, and not spend it on frivolous activities,” she said. Now, that everything is gone, she has no idea how she can save up again to re-build. “But, I have to keep myself happy, I cannot keep crying,” she added. 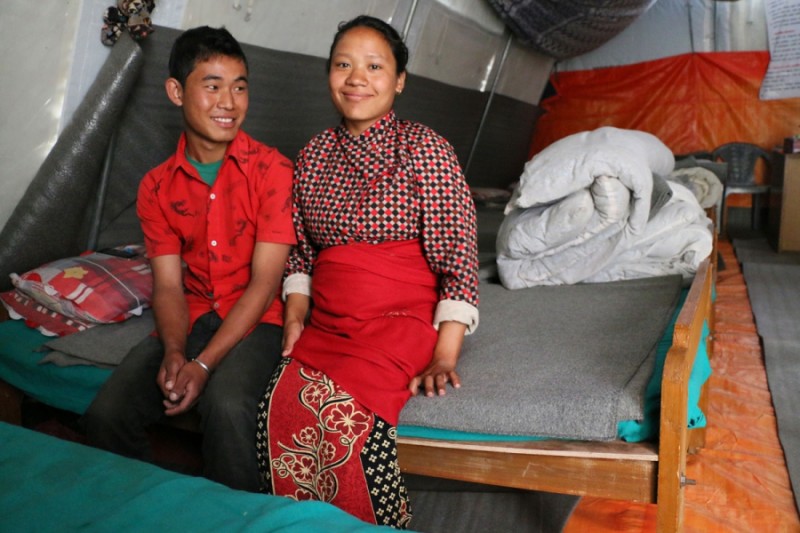 Junu Syangtan, 20, is pregnant with her first child. Her family's house was completely destroyed in the Nepal earthquake last year.

So, she's spending her last month of pregnancy in this tent shelter outside a local health clinic, two hours away from her village.

Here, she gets food, water, and regular check-ups. Her husband, Buddha Syangtan, 21, stays with her to keep her company. 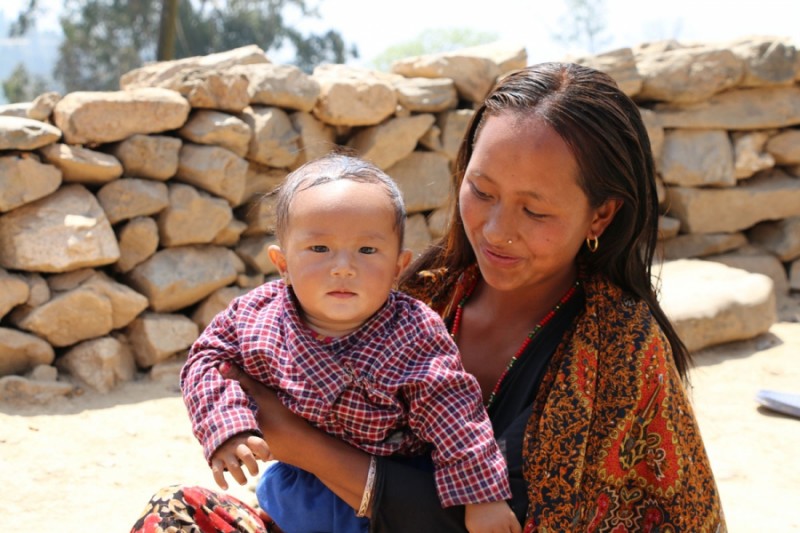 Ayushma Lama, 22, plays with her 7-month-old son, Yashu, outside the tin shelter her family built after their home was destroyed in the earthquake.

“I felt as if everyone was going to die,” she said. “There was dust everywhere. Many people died, but I survived. That’s when I thought I could make my future.”

Her husband works as a cook at a local restaurant, and luckily, he’s skilled in carpentry work so he could build a two-story shelter with wood and corrugated metal sheets. They borrowed $1,400 at 10 percent interest to build their shack, and she thinks it’s strong enough to withstand another earthquake. She does hope to rebuild a real house in the next 10 to 15 years, but estimates it could cost more than $9,000.

She says she’s happy she’s no longer in an emergency shelter, where babies suffered from illnesses. Her baby is healthier here, but he no longer has the nursery room she had planned before he was born.