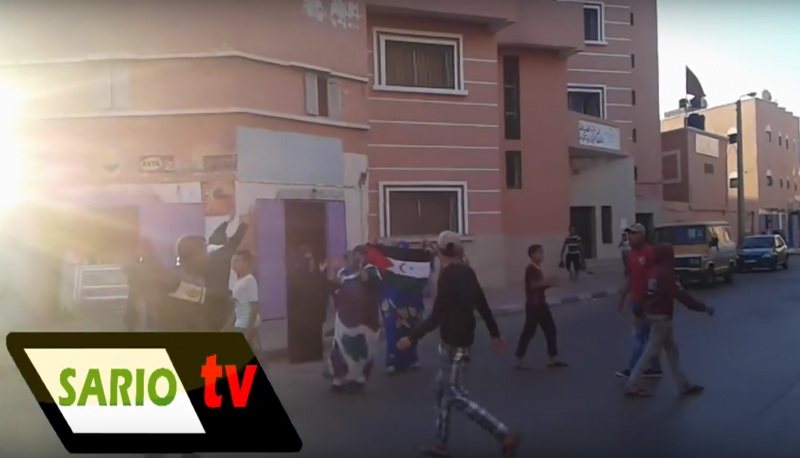 The frustration with the status quo can be seen in recent footage of demonstrations in Western Sahara. On Monday, several coordinated protests took place throughout the territory. Photo credit: screen shot from protest video shared on YouTube by the Sahrawi Centre for Media and Communication

Editor’s Note: A version of this post was originally published on Watching Western Sahara Checkdesk, a collaborative platform for curated and contextualized videos from Western Sahara.

While international diplomats met this week to determine the future of the United Nations peacekeeping mission in Western Sahara, demonstrators throughout the occupied territory held protests calling for self-determination and human rights.

The dispute over the sovereignty of Western Sahara has gone on for more than four decades. After Spain withdrew from its former colony, Morocco waged a war for the land, fighting off the Sahrawi independent army of the Polisario Front. By the time the UN brokered a ceasefire in 1991, tens of thousands of Sahrawis had been displaced to Algerian refugee camps. Today, the disputed territory is on the UN’s list of non-self-governing territories. One of the steps the parties agreed to was a referendum to allow Sahrawis to vote for independence or integration with Morocco, but that has yet to happen.

The UN Security Council made its annual decision to extend its peacekeeping mission, known as MINURSO, yesterday, extending the mission's mandate for another year. Sahrawis and international advocates have called on the UN to expand the mission’s mandate to include human rights monitoring. On Tuesday, the African Union envoy to Western Sahara, former Mozambican president Joaquim Chissano, called for a timetable for the referendum.

The frustration with the status quo can be seen in recent footage of demonstrations in Western Sahara. On Monday, several coordinated protests took place throughout the territory.

In the demonstration above, a woman holds a Sahrawi flag as protesters call for self-determination–a criminal act under Moroccan law, which prohibits organizations and individuals from challenging Moroccan sovereignty over the territory. Chanting in Arabic, protestors call for the overthrow of the regime and the right to self-determination.

Sahrawi protests on Monday also called for justice for Brahim Saika, a leading activist in the movement for Sahrawi economic rights. Saika died on April 15 at a hospital in Morocco while in detention.

For more curated videos from Western Sahara, go to Watching Western Sahara Checkdesk, a project of the WITNESS Media Lab, where an earlier version of this post was originally published.