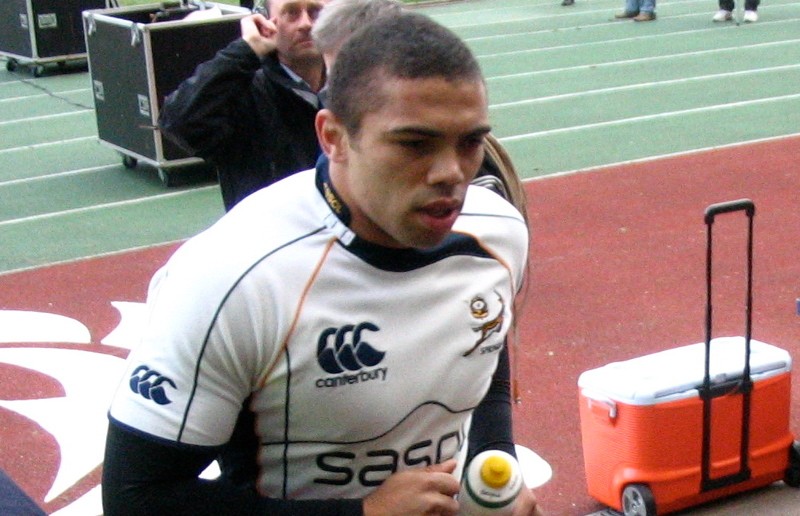 Bryan Habana is one of the few non-white South Africans to play for the South Africa national rugby union team. The team was a symbol of racial segregation during apartheid era. Creative Commons image by Wikipedia user Sahmejil.

South Africa’s minister of sport and recreation has banned several sports bodies from bidding on and hosting international events because of their failure to reach their transformation target, which ensures racial diversity on teams.

In its third year, the report is released every year to sporting bodies and to the public by the Eminent Persons Group on Transformation in Sport.

Sports transformation targets for South African sports bodies are meant to correct the injustices in sports caused by apartheid.

The last national census in the country in 2011 shows that black South Africans stood at 79.2%, white at 8.9%, colored (a term for South Africans of mixed ethnic origin) at 8.9%, and Indian or other Asian at 2.5%. The transformation target of national teams in South Africa is 60% black African, Indian and Coloured.

Afriforum, a civil rights organisation which usually defends the rights of Afrikaners, plans to file a complaint with international sports bodies saying that such bodies expressly forbid any form of political interference in sport. Afrikaners are the descendants of Dutch settlers in South Africa who dominated South Africa's politics before the end of apartheid in 1994.

The decision by Minister Mbalula has received mixed reactions on Twitter.

I'm 100% behind Fikile Mbalula on penalizing Cricket and Rugby in SA!!! It’s been over 20yrs n still not enough black people in these teams!

Mbalula's decision is probably two decades late. The ANC has incentivised the exclusion of black people in SA.

ANC refers to the African National Congress, the party of Nelson Mandela which has ruled since the end of apartheid.

Sure Kamhunga asked those who are opposing the ban:

‘What's the difference between #Apartheid and #Transformation?’

@Unathi_Kwaza @MYANC so what transformation is Mbalula talking about if leaners in townships are not involved in extra mural activities?

What's the difference between #Apartheid and #Transformation? Don't ask @MbalulaFikile Fikile Mbalula – he can't tell you.

Adrian said winning in sports in more important than color:

@MbalulaFikile #Mbalula All we want is a winning nation irrespective of colour, less talk more assistance from your department!

The government needs to take responsibility for the lack of diversity, Kalubi argued:

Ok. Mbalula can cry loudest about transformation but if his Govt refuses to build sport facilities in villages, how will we transform sport?

By not hosting global sporting event, David Küsel thought there will be negative impact on the economy:

The ban on hosting global sporting events is another nail in the coffin for economic development and job creation. Thanks @MYANC & #Mbalula

Some South Africans wondered why Bafana Bafana, South Africa's national soccer team, which is predominantly black, has not been transformed.

Shimmy called for fairness in transformation:

But @BafanaBafana only has one white player dean furman is this transformation one sided ? We need white players in football also.My mbalula

However, others pointed out that Bafana Bafana reflects South Africa racial composition. Max Africa said one white soccer player is more than enough:

White people make up 8.9% of SA's population. 1 white player in #Bafana is 9.1% of team, which is more than enough #Transformation #Mbalula

A national team should reflect a nation's demographics. So this noise about Bafana is misguided #Transformation #Mbalula