Five Years Ago, a Tsunami Devastated Japan. Now a Filmmaker Looks Back. 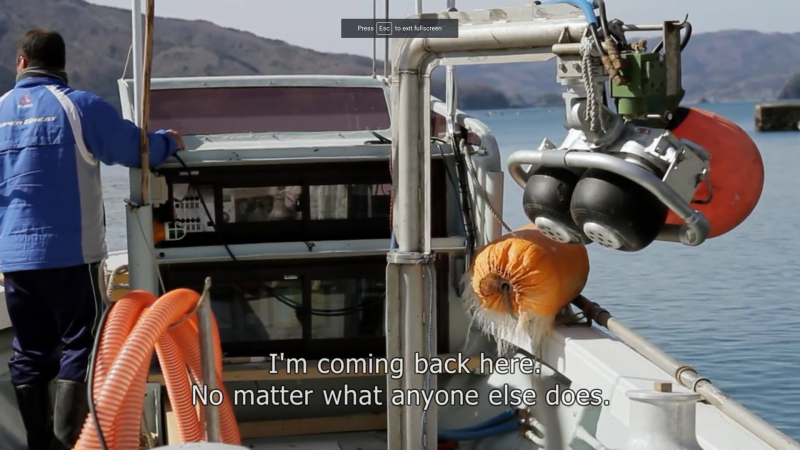 Screencap from Funakoshi, by Estelle Hebert.

The Canadian filmmaker Estelle Hebert has produced a one-hour documentary about one village's struggle to revive after a massive tsunami devastated much of Japan on March 11, 2011.

In her introduction to her hour-long documentary, Hebert says:

[…] Many survivors thought it simpler and more convenient relocating to urban areas with friends or family members. Returning home meant returning to empty plots of land and piles of rubble, not knowing when or if government support would ever make its way to less populated towns. As a result, hundreds of small villages along the east coast were left abandoned.

For Funakoshi, a fishing town home to about 350 people prior to the disaster, the story differs a little. A handful of locals decided they were to not leave their hometown abandoned, and work towards revival.

Funakoshi follows community leader and fisherman Koichi Nakasato, working towards keeping his washed-away hometown alive alongside a group of devoted residents despite the personal challenges of dealing with the aftermath of the tragedy.

Hebert, who participated as a teacher on Japan's Exchange and Teaching Programme, says she learned of the sheer scale of the devastation when she visited Miyagi Prefecture as a volunteer following the disaster.

And it was as we drove away from Funakoshi that I began to think this could be a great story, one that should be documented, and one that should not be forgotten. A lot of the times in the media, you don’t necessarily hear about the long-term recovery projects after natural disasters. How do these people cope? How long does it take for them to have a sense of normalcy in their life? What kind of long-term support are they provided with? Will Funakoshi ever be rebuilt? How are the fishermen managing despite having lost so much?

Hebert says she traveled to the village of Funakoshi over the course of the year in order to “document what [was] happening, to provide viewers with a personal, intimate and in-depth look at members of this small Japanese community as they attempt to rebuild their lives despite the grand toll of destruction that surrounds them.”