Chinese Big Brother Is Watching You, Even in Australia 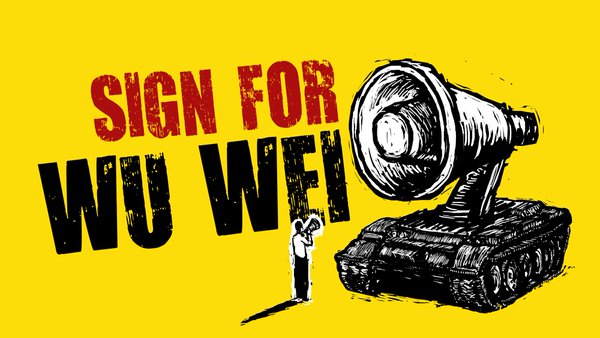 Many Chinese dissidents are signing a petition in support of Wu Wei, demanding that the University of Sydney reconsider the case and protect Wu's right of free speech. Image from Change.org

Wu Wei, a Chinese-born Australian PhD candidate and tutor at the University of Sydney's business school, resigned on April 18 over petitions from Chinese students that he had made “racist” remarks anonymously on popular Chinese social media platform Weibo under the screen name “Pekojima”.

The university had launched an internal investigation into the matter, and Wu since apologized for his comments which were highly critical of China and privileged Chinese.

On Twitter, Chinese dissidents are raising concerns that the incident, which was a hot topic on Chinese social media, represents an attempt by the Chinese authorities to scare voices of dissent abroad into silence.

As reported on mainland Chinese media outlets, the remarks that got Wu into trouble included:

Since April 14, when the case first became a hot topic on Chinese social media, Chinese Communist Party-affiliated media have certainly egged on the outrage. Some of Wu's supporters have questioned the motives of the Chinese who complained and wondered how the overseas students managed to match Wu's anonymously written posts, most of which were published in 2015 on Weibo, with his real-life identity.

Though Wu never expressed any inappropriate remarks on class, those who called for the school to fire him said they felt uncomfortable having him as a teacher, knowing what he had written. Evin Wang wrote on Facebook with screenshots of his posts on Weibo and the hashtags #FireWeiWu and #Stopbeingracist on 13 April:

As a Chinese student, I feel very insecure in his tutorials and lectures, because of how clearly he shows his HATE towards China and the Chinese people. He makes me wonder, if he hates Chinese so much, how could he possibly teach Chinese students without any prejudice? Is there any chance that he could hurt us in his tutorial? How can we pay $4750 tuition fee per unit to get this kind of “tutor”?!WE DO NOT ACCEPT IT.

On the other hand, a Change.org petition directed at the school argues the complaints were built on a series of anonymously written comments and extracted out of context:

We are concerned that Mr Wu is becoming a victim of the Chinese government’s increasingly intrusive attempts to curb voices of dissent among overseas Chinese. Mr Wu has a long track record of critical comments against the Chinese government, its political system and social affairs on social networks.

A Chinese student studying in Australia wrote anonymously to a Hong Kong-based investigative journalism platform called the Initium, explaining how the incident has created a chilling effect on overseas Chinese circles. The student referenced “human flesh search”, a term describing when online vigilantes dig through a person's social media history to find incriminating messages to later shame them:

On Weibo, there is a small circle of dissidents among overseas Chinese communities. But they seldom express their political views. Perhaps they have learned how to self-censor under peer pressure. […] I was “human flesh searched” by a group of overseas Chinese students after I expressed my support for Wu Wei on Weibo. And on Zhi Hu, a Chinese version of question-and-answer site Quora, a big-V [online celebrity] published my personal data along with a few others, labeling us as “a cult against Chinese”. I was intimidated by such hostility and had to delete all my online data and posts: the distribution of the content would bring my parents trouble.

For overseas Chinese students, such kinds of “human flesh search” actions is one of the best means to silence dissent and those who are not patriotic enough.

The Chinese student further argued that the hullabaloo has extended the obligation of “patriotism” to overseas Chinese who have foreign passports:

Throughout this recent incident, many have expressed opinions such as “Chinese have to love China even if they have migrated”. This is outright ridiculous. But these opinions have gained a large number of “likes”. Among overseas Chinese students, being Chinese means an obligation to love China. And among Chinese students in Australia, loving China is equal to “supporting Chinese government”.

Twitter user @RZLHK suggested that the Chinese big brother is watching even when one has left China:

Welcome to University of Sidney. Feeling like in Beijing. The Communists always watching you. #巴丢草 #吴维 @badiucao pic.twitter.com/JmieZL5URC

Coincidentally, the overseas Chinese students’ campaign against Wu Wei was parallel to a domestic propaganda crusade against “sea turtle spies” — Chinese nationals who have returned to China after studying overseas. On April 20, state broadcaster CCTV suggested that the increasing number of young people studying abroad could put the country's national security at risk.

Taken to the extreme, this suggests that under the watchful eye of big brother, overseas Chinese students must make a performance of their love for China's government in order to return home without posting a security threat.