Anatomy of a Macedonian ‘Colorful Revolution’ 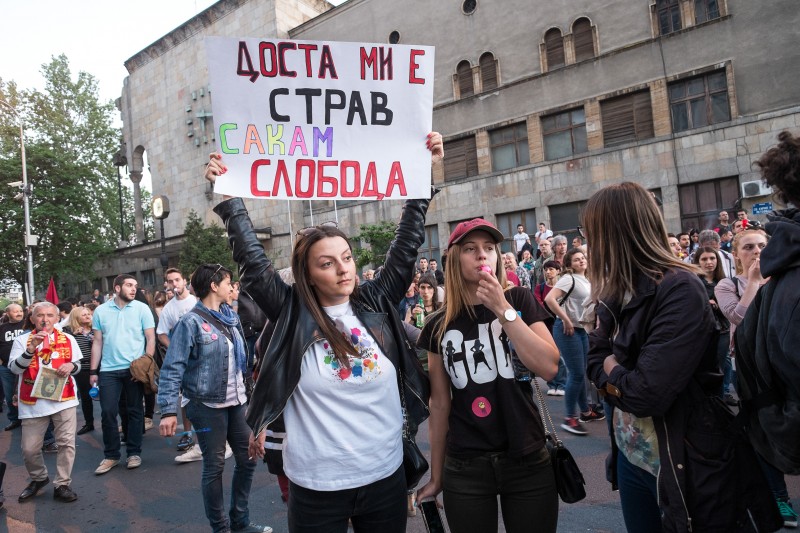 “I am sick of fear, I want freedom!” Photo by Vanšo Džambaski, CC BY-SA.

For over two weeks, tens of thousands of Macedonian citizens from over a dozen cities have rallied together in what has been dubbed the “Colorful Revolution” to protest against state corruption and impunity. The movement takes its name from protesters tossing paint on government buildings and landmarks.

The demonstrations began after President Gjorge Ivanov announced a pardon for more than 50 top politicians and their associates who were under investigation for abuses of power. Last year, the political opposition revealed the country's secret service under ex-Prime Minister Nikola Gruevski had secretly wiretapped over 20,000 people; in those conversations, top Macedonian officials seem to implicate themselves in a variety of misdeeds including election fraud, which the Macedonian Special Prosecutor's Office was investigating until the president's pardon on April 12.

Since then, the movement has grown in strength, and participants are eagerly sharing their organizing tactics online in the hopes of encouraging others to join in. Here's how they're going about it.

Define who you are and what you stand for

The protests are organized ‘horizontally’ by a loose network of activists, including members of NGOs and civic initiatives, as well as members of some opposition parties — and any individual citizen who joins. A set of common principles is what unites them, and this has been essential in defining the movement.

For example, one graphic shared on Twitter laid out the protesters’ beliefs plainly: 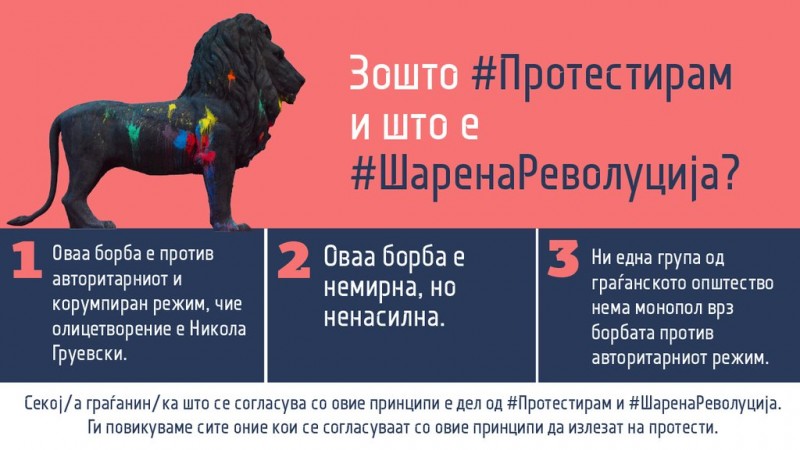 “Why do I protest, and what is the Colorful Revolution?” via @MKColorful

Why do I protest, and what is the Colorful Revolution?

Participants have taken this decentralized approach as a way to attract more people and to prevent anyone from “hijacking” the protest for their own cause. Colorful Revolution's protesters often experiment and disagree on various approaches, and resolve differences through open discussion.

Reflecting the linguistic diversity of Macedonia, the protesters have been sharing information about the demands in various local languages, like Macedonian, Albanian (#protestoj!), Roma, as well as English.

Even the English translation of the term #ColorfulRevolution was a result of “the wisdom of crowds.” The Macedonian term #ШаренаРеволуција (“sharena revolucija” in the Latin alphabet) refers to mix of various colors, and can be translated as “multicolored” too.

However, “colorful” stuck, especially after Germany's international broadcaster Deutsche Welle used it within their article titled, “Protesters hit Macedonia's capital with paint balls and soap suds in a ‘Colorful Revolution’.” I held an informal poll on Twitter to see what Macedonian users thought about the translation. Results showed respondents overwhelmingly agreed with Deutsche Welle's choice:

Participants are often seen wearing T-shirts with a stylized logo of the three most prominent special public prosecutors, Lenče Risteska, Katica Janeva and Fatime Fetai, against the acronym “СЈО” (for Special Public Prosecutor's Office, in Macedonian). The original design was shared online for people to download and make their own t-shirts as a sign of support for the anti-corruption efforts of the prosecutors. 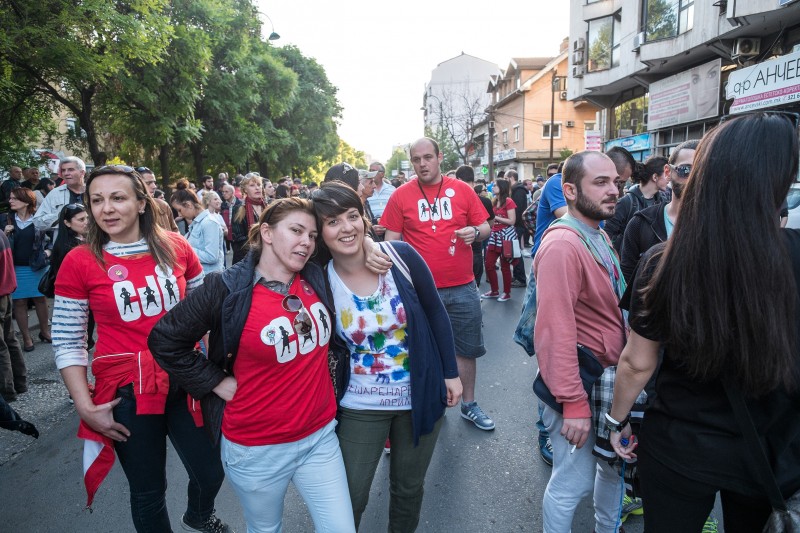 Soon, over a dozen designers started making logos and other visual materials, and posting them online in high resolution for public use. The web page sharena-revolucija.ie.mk collects these designs in one place, providing an easy to use digital resource. Participants have used them to make t-shirts, banners, stickers, various badges and flags. 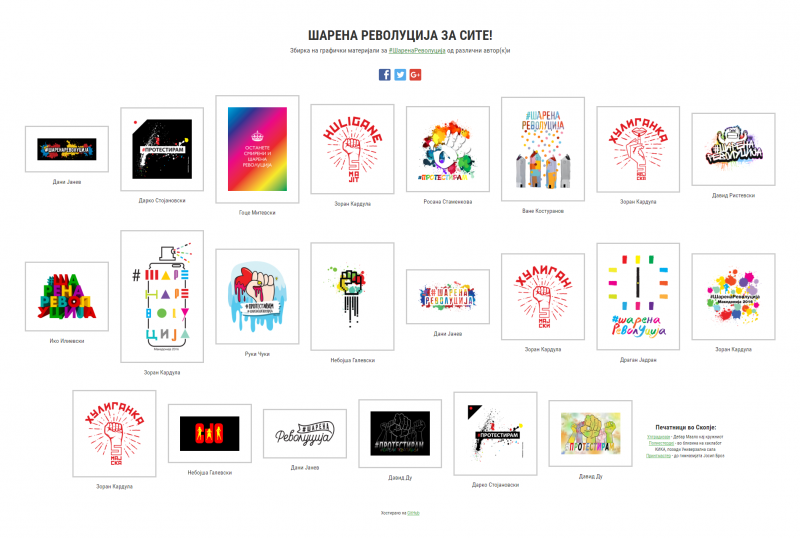 Screen shot of sharena-revolucija.ie.mk with all the various logo designs used by protesters.

All paraphernalia is self-financed by the protesters. The protests have also led to the blossoming of cottage industry catering to their needs — entrepreneurial street vendors offering whistles or bottled water follow the marches. They quickly switch to selling umbrellas when it rains.

Opt for paint-filled balloons over violence

Violent acts that bring criminal liability are strictly forbidden. This includes any activity that can harm another person, especially police officers. People who throw stones or other dangerous objects or strike out at others are considered provocateurs. This is in line with the established tradition of nonviolence of past protest movements in Macedonia.

But activities such as throwing eggs or paint or writing graffiti on buildings or statues are considered misdemeanors under Macedonian law, with penalty of about 50 euros (about 56 US dollars), and so the Colorful Revolution has embraced these tactics.

Protesters are using balloons filled with paint and sand (for safety in case of bad aim and for aerodynamics). The following online tutorial explains how to make them:

1. Take a wide funnel or make your own from a big syringe
2. Put the cut end into an empty baloon
3. Fill half of the balloon with sand
4. Fill a plastic bottle with paint (used to transport the paint from home to protest site)
5. Tie the balloon to the bottle noose to fill it with paint
6. Tie the balloon and rinse it with water
7. You are now ready for a colorful revolution.

There's a loose consensus among the protesters to paint only objects that symbolize the power and what they deem the arrogance of the regime, such as the Triumphal Arch and the statue of clothed Prometheus, which bears resemblance to the works by Arno Breker symbolizing “The Party” as bringer of light and knowledge to the people. 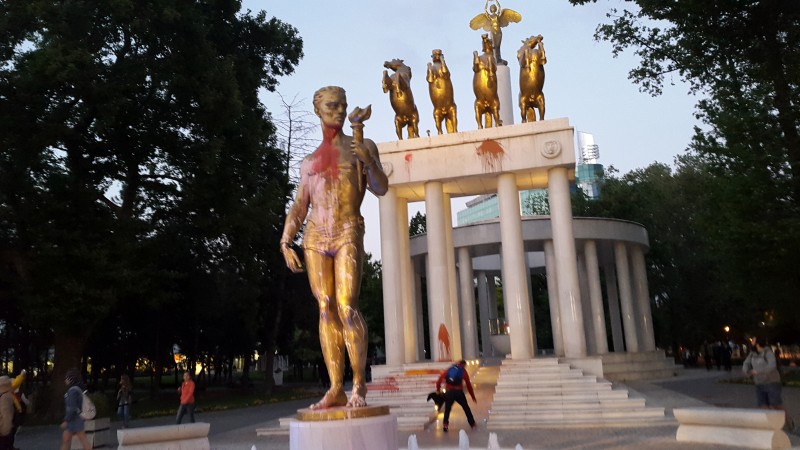 The Prometheus statue, built as part of the controversial development project Skopje 2014, turned pink. Photo by Filip Stojanovski, CC BY.

In response to arrests of some protesters on charges of rioting or participating in a mob, the movement is also sharing legal information in Macedonian and Albanian about citizens’ rights in case one is detained or arrested.

Counter the government narrative with a sense of humor

The Colorful Revolution name not only is a reference to the paint-filled balloons, but also ridicules the government claims that the protests are part of “Color Revolution,” which refer to the non-violent revolutions that took place in several countries formerly belonging to the Soviet Union and were perceived to be fomented by external Western forces.

To people acquainted with the history of Macedonian politics, these claims sound a bit ironic. In 2006, the ruling party VMRO-DPMNE changed their election campaign color scheme from red and black to orange in order to capitalize on the 2004 Ukrainian Orange Revolution and appear pro-Western and progressive. 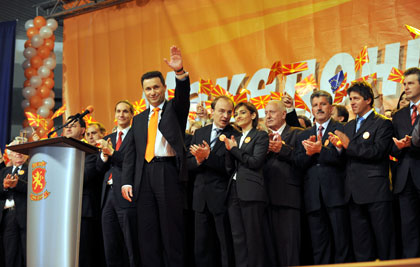 VMRO-DPMNE is now attempting to present themselves simultaneously as supported and victimized by the West. The party has poured several million dollars into lobbying in the US to present the opposition as pro-Russian. This went to such lengths that the US issued a denial of their support for VMRO-DPMNE or any other particular party.

On the other hand, ex-Prime Minister and current VMRO-DPMNE head Nikola Gruevski as well as President Ivanov blame the West for the protests. Russia has issued diplomatic note of support of the Macedonian government, while government-funded Russia Today has prioritized the message of the counter-protests and reported that they are more numerous than the anti-corruption protests.

One Twitter use poked fun at all the spin by doctoring a video clip of Gruevski: