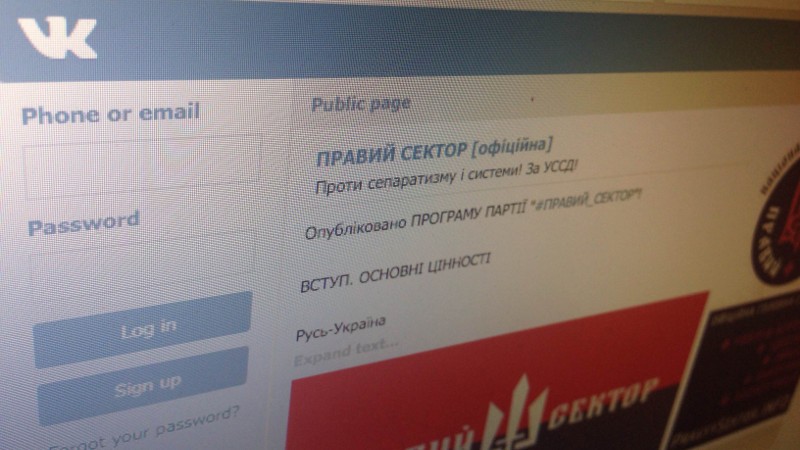 One of the currently available VKontakte pages for the Ukrainian nationalist organization “Right Sector.” Image by Tetyana Lokot.

In a new report, Russian Prosecutor General, Yuri Chaika, has publicly accused Ukrainian nationalist group “Right Sector” of attempts to use the Internet to stage mass unrest in Russia, in a bid to overthrow the Russian government.

According to RIA Novosti, Chaika will deliver the news in a public address to the Federation Council on April 27, and a copy of the report has been made available to the news agency.

The Prosecutor General claims that “Right Sector” members used the Russian social network VKontakte to create public pages and organize “mass riots and unsanctioned public events,” which eventually led to the blocking of these pages.

According to Moskovsky Komsomolets newspaper, the Ukrainian nationalists have already refuted Chaika's claims.

“Right Sector” has denied Chaika's accusations of preparing a state coup in Russia: “We have our hands full in Ukraine right now.”

“Right Sector” as an organization has been banned in Russia since November 2014. In March 2014, Russian investigators officially charged Dmitry Yarosh, who was the leader of the Ukrainian nationalist group at the time, with inciting terrorism and extremism.

In April 2014, Russian media censor Roscomnadzor blocked a number of VKontakte pages linked to the “Right Sector” movement, claiming that the group was publishing extremist content.

Several Russian Internet users have also been charged with extremism for, among other things, reposting “Right Sector”-related content or for subscribing to the nationalist organization's existing pages on social media.

The Russian Prosecutor General's report notes that over the last 10 years, the number of extremism-related crimes in Russia grew ten-fold: from 130 cases in 2004 to 1,329 in 2015. Most of these criminal cases, according to Chaika, deal with “extremist” content posted online.

in 2015 the Prosecutor's Office was instrumental in deleting “illegal extremist and terrorist materials” from over seven thousand websites. In addition, the Office inspected over 11 thousand media reports and found over 15 thousand violations connected to publishing extremist content. A total of 836 pages or articles were added to Russia's federal list of extremist materials in 2015.