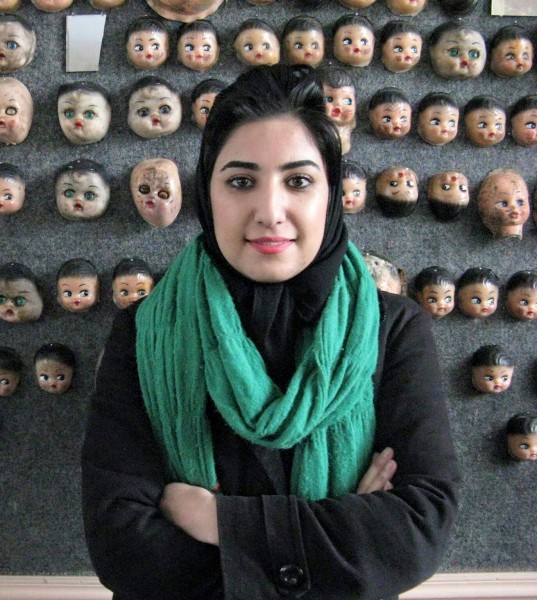 Atena Farghadani stood trial in 2015 for charges that included insulting members of parliament and spreading propaganda against the system. Image taken from the “Free Atena” Facebook page.

Activist and cartoonist Atena Farghadani is set to be released from prison in Iran after an appeals court reduced her sentence from 12 years to 18 months.

On April 25, Journalism is Not a Crime, an organization that documents persecution of Iranian journalists, reported that she will be freed on May 11, 2016, according to her lawyer.

She was tried in what is called a Revolutionary Court, which are known to hand down harsh sentences for minor offenses.

In June 2015, Farghadani was convicted on charges of spreading propaganda against the system, insulting members of parliament through paintings, and insulting the supreme leader, and sentenced to 12 years in prison. At the time, Hadi Ghaemi of the International Campaign for Human Rights in Iran commented, “The peaceful expression of dissent remains a red line in Iran. Cross it and you risk prison time.”

According to Human Rights Watch, Farghadani may have been a particular target because of her connection to the families of political prisoners who died in prison following Iran's flawed presidential elections in 2009.

Throughout her custody, Farghadani has faced violence at the hands of authorities. According to a report from the United Nations Special Rapporteur on Human Rights in Iran (see pdf):

On 10 January 2015, Ms. Atena Farghdani was summoned to branch 15 of the Revolutionary Court, where she was arrested and subsequently beaten in front of her parents. Upon Ms. Atena’s protest, she was taken to a court room, where she was insulted and beaten again, this time allegedly in front of a court judge. […] Of the two months in detention, she reportedly spent 20 days in solitary confinement and was also subject to a harsh bodily search and mistreatment. She also allegedly engaged in a hunger strike to protest her prison conditions, lack of access to defense lawyer and contacts with family members.

According to a different UN report, she was also “reportedly forced to take virginity and pregnancy tests,” which Iranian authorities justified as a response to “allegations of sexual assault against her on some websites.”

To my cartooning colleagues around the world: let's keep watching and speaking out for Atena Farghadani https://t.co/nYfb7t9cJO

For past coverage on Global Voices of Atena Farghadani's case: