Ecuadorians Come Together Online to Help Those Affected by the Earthquake 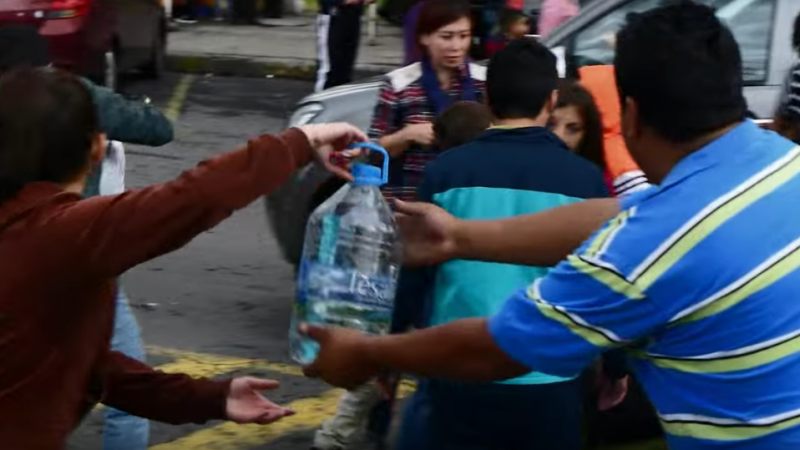 Screenshot of video taken in Quito, the capital of Ecuador.

It is a tragedy that has united 14 million residents. As Global Voices reported, during the evening of April 16, 2016, Ecuador's coast was shaken from north to south by a 7.8-magnitude earthquake, one of the worst to hit Latin America in the last decade. The epicenter was located in the Pacific Ocean at a depth of 20 kilometers, and 697 aftershocks were felt after the initial tremor. The strongest aftershock, which registered 6.2 on the Richter scale, took place during the early morning of April 20, as the Geophysical Institute of Ecuador confirmed via its Twitter account (@IGecuador).

This event has made people forget about their political and social differences. Personal approval or rejection of the national government's policies were put aside in order to help the most affected provinces: Esmeraldas, Manabí, Santa Elena, Guayas, Los Ríos and Santo Domingo de los Tsáchilas, all belonging to the coastal region. Hundreds of buildings were reduced to rubble in just minutes. Roads were damaged. The touristic center of Ecuador was devastated.

For those Ecuadorians watching in horror from abroad, all they could do was wait for news to trickle out of the affected areas. Ecuadorian journalist Sabrina Duque, who currently resides in Lisbon, spoke with alternative news site GkillCity about what it's like to experience the tragedy from distance:

When you are far away and you cannot embrace who you want, tragedy hurts in a different way. How can you help if you cannot be there to lend a hand? Send donations to the nearest consulate or give money to the Red Cross about which you know little. You want to be there and help someone. Talk to someone who is looking to unburden the scare he has experienced. Take the kids to play in the park, so they can forget about the sadness for a moment, and so that their parents can sort out their thoughts. Or you just want to be there to hug your mom.

Social media has served as a great support not only for Ecuadorians abroad, but also for those on the ground. The first news of the earthquake came from Facebook and Twitter users who used the hashtags #TerremotoEcuador (#EarthquakeEcuador) and #SismoEcuador (#SeismEcuador) to report what was happening in their locations. Then #DesaparecidosEc (#MissingEc) was created to identify missing persons, which the country's Ministry of the Interior used to search for victims. Reporting those who had been rescued was done through #EncontradosEc (#FoundEc).

Likewise, volunteers coordinated using the hashtag #SeNecesitaEC (#NeededEc) for collecting food, clothing and medicine. #SeOfreceEc (#OfferedEc) is useful for users who want to make donations. Minister of Production, Employment and Competitiveness Vinicio Alvarado has posted updates on his Twitter account about the financial support that the country has received from the private sector.

The #EcuadorListoYSolidario (#EcuadorReadyAndUnited) is used throughout the day to send messages of encouragement to those affected. The government has also created the website of the same name, Ecuador listo y solidario, to register volunteers and to communicate the status of transport routes, the collection centers for donations and recommendations for emergencies.

Are you looking for a missing relative?, enter their information on this platform #MissingEc

200 people, including volunteers and staff, help in Manta, Ecuador #EcuadorReadyAndUnited

A group of Ecuadorian hacktivists designed Divi-Damos, a free digital tool to manage the donations being collected throughout the country. The purpose of the platform is to make decisions based on an up-close understanding of the situation on the ground. Thus, agencies that are in charge of the distribution of donations can estimate what is received, request what is needed, and know in real time about the delivery of supplies to those who need it.

Another citizen initiative is Mapping Ecuador, a digital map that facilitates the set-up of routes for the delivery of aid to the victims of Manabí and Esmeraldas, the regions most affected by the earthquake. At the same time, this allows the authorities to rebuild the cities affected by the earthquake.
The creators of the tool have focused on publicizing its use and teaching many people how to build maps. More explanations can be found in this Spanish-language Hangout created by the group:

More Hangouts and tutorials are shared under the hashtag #MappingEcuador.

On April 20, Ecuadorian President Rafael Correa announced the implementation of economic measures to address the damages and costs of the earthquake. Some of the measures include an increase in taxes and the creation of new contributions, which provoked reactions on social media. On Twitter, the #EcuadorNoConfiaEnCorrea (#EcuadorDoesn'tTrustCorrea) trend continued for several hours and supported the citizen initiatives over those of the government.

Citizens have taken charge of all the organizing and the collaboration, there was no need for Rafael Correa in this country #EcuadorDoesn'tTrustCorrea

Some even organized a sit-in and donation drive for April 28 to protest. “The country is in an emergency and [the ruling party] Alianza País has politicized the situation!” a press release, tweeted below, read. “As civil society, we've organized ourselves effectively on various fronts to offer our support to those who need it today, without interference from this authoritarian and populist government.”

Let us support the #SolidaritySitIn, civil society can and should be organized. #EcuadorDoesn'tTrustCorrea

As of April 24, the Department of Risk Management and local media reported 655 people dead; and 4,605 injured. The Pedernales canton (north of the Manabí province) has been hit the hardest — 80% of the area, home to about 50,000 residents, is destroyed, and the cost to rebuild it, according to the government, is approximately $240 million.

Authorities have made a plea to the public to distribute information about the earthquake responsibly. They request that users, in their digital collaboration efforts, turn to official sources of information in order not to spread panic in the affected areas.

Online discussions and volunteer efforts continue, and while people still may disagree over the way the country is run, every donation made in the spirit of aid is helping to heal the extreme political polarization that was until recently dividing Ecuador:

Tweet: Never underestimate the value of a word of encouragement!! #EarthquakeEcuador