After Weeks of Scorching Heat, Myanmar Is Hit by the Worst Hailstorm in 50 Years 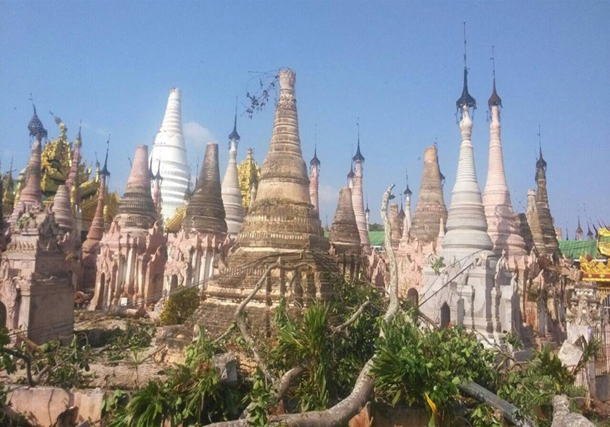 A rare hailstorm recently hit several provinces of Myanmar, at a time when the whole country is experiencing a prolonged drought caused by rising temperatures. Strong winds struck Mandalay, Sagaing and the states of Shan and Chin, while hailstones as big as golf balls rained down on these regions.

More than 1,700 pagodas and 7,500 houses were damaged across the country. Authorities described the freak hailstorm as the worst in 50 years.

Many residents were surprised to see hailstones in the middle of summer. Currently, Myanmar is struggling to cope from the harsh impact of the El Niño weather phenomenon. Water shortages are affecting both urban and rural residents, especially farmers who are dependent on rain for the cultivation of their crops. According to hospitals, heat stroke cases are on the rise because of the hot weather.

Meteorologists said the extreme weather events are related to the “atmospheric instability” in the region.

Below are some of the hailstorm photos shared by Myanmar Internet users:

Hail in Mandalay and Sagaing ,Myanmar.. That was creepy.Never seen that much before o.O pic.twitter.com/tVWU0DhGlC

#Hailstones at my home back door Photo taken by Dad. (23Apr16)