Macedonian Crisis Deepens as Protests Increase in Number and Intensity 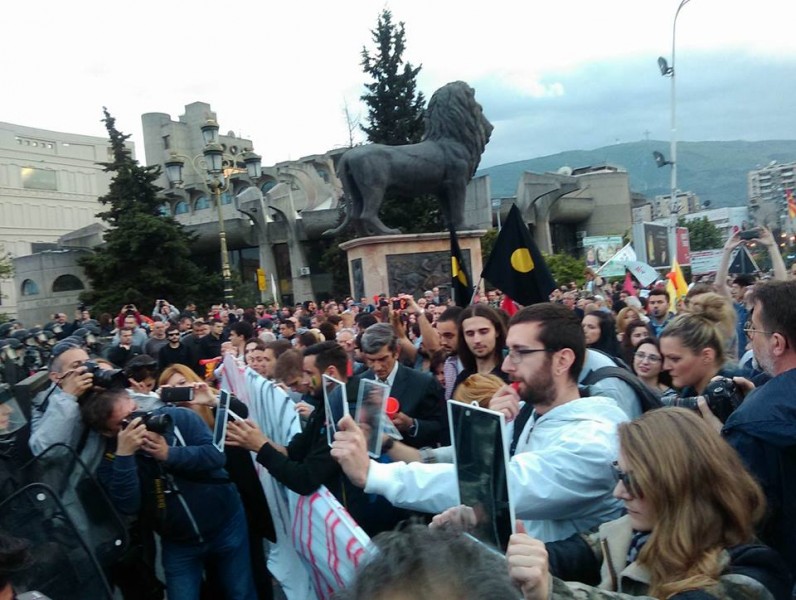 The political crisis in Macedonia continues to deepen, affecting the country’s international relations as a plethora of protests proliferate across the tiny Balkan state complementing the more general #ColorfulRevolution protest movement.

According to the report by OSCE Election Observation Mission, published April 22, the political climate in the country began to sharply deteriorate after April 12, when President Ivanov pardoned all those charged, under investigation and suspected in a wiretapping scandal targeting members of the country's opposition.

OSCE is not the only institution flagging danger in Macedonia. Both the U.S. State Department and the EU called on Ivanov to reverse his pardon.

In a recent interview with 24Vesti, the EU Parliament mediator for Macedonia Richard Howitt expressed his concern for the country’s welfare if Brussels’ recommendation is ignored by the government in Skopje.

Howitt, along with fellow Members of the European Parliament Eduard Kukan and Ivo Vajgl, as well as Enlargement Commissioner Johannes Hahn released an April 22 statement saying that the government could face sanctions if it continues its authoritarian course.

As part of the trust-building measures sanctioned by the Pržino Agreement — a political compromise reached with Western mediation last summer — the Macedonian parliament appointed representatives of the opposition at the heads of two key ministries: interior and social policy.

But the new Minister of Interior, Oliver Spasov, has warned ruling party apparatchiks within the ministry have staged “a coup” and that his subordinates are refusing to heed orders, answering only to the VMRO-DPMNE faction's leadership.

Meanwhile, on the streets…

On April 22, three different protests took place in Skopje, all independent of each other, pointing to a boiling political mood.

In the morning medical students demonstrated under the slogan “We are not lab rats!” as part of a protest against the changes in the Law on Medical Studies, which they claim diminishes the quality of education they receive.

The Minister of Health’s office received representatives of the protesters and told them that no change can be made to legislation while the parliament is not working.

The students say their protest is not connected to the general protest movement sweeping the country.

In the afternoon of the same day, opposition ethnic Albanian political parties held their own an anti-government protest.

This protest complements the Colourful Revolution protests, demanding an end to government corruption, but with a distinct focus on the grievances of ethnic Albanians.

Their slogans — emphasising fabricated court cases against ethnic Albania and targeting the ruling VMRO-DPMNE party –evoked memories of the militant Albanian National Liberation Army, famous for its bitter conflict with Macedonia's security services that peaked in 2001.

Quite a number of ethnic Albanians, have also been at the forefront of other civil protests within the movement #protestiram (#протестирам) AKA the #ColorfulRevolution (#ШаренаРеволуција)

These bigger ‘Colorful Revolution’ protests continue to gain momentum. Every day at 6 pm thousands of people continue to gather in front of the Special Public Prosecutors’ Office, and then march the streets passing various institutions.

More join along the way, especially at points where police block the procession.

All of these protests are non-violent, although an overwhelming police presence — especially when ethnic Albanian opposition parties were on the march — has helped kindle tensions. 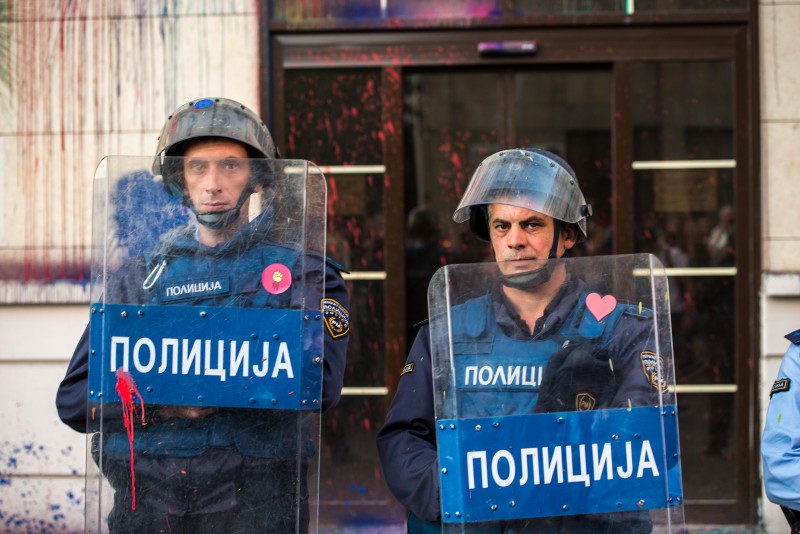 On Friday evening the ‘Colorful’ protest showed that no government building or monument will be spared by the “artists” of the Colorful Revolution.

Protesters seem to agree with OSCE’s take on the deterioration of media, and chucked paint all over the new Agency for Audio and Audiovisual Media Services building on April 22 in a symbolic act of resistance.

Demonstrators chanted: “This used to be a park” while redecorating the facade, condemning both the government’s illegal construction of buildings on public land and the hypocrisy of media legislation.

This used to be a park! I protest!

One of the leaked wiretaps that fuelled the political crisis in the first half of May 2015 showed the government destroyed the park in 2013 after the Former Prime Minister Gruevski decided to “beautify” the area with a ‘baroque’ administration building, punishing local residents who did not vote for his party during the previous elections.

A group of civil activists called Parkobrani (“Park defenders”) occupied the park, until a 400-strong police force laid siege to the whole central area and arrested 11 of them.

As Balkan Insight reported, “the demolition took place while Macedonia celebrated the country's biggest national holiday, Ilinden, when the city is half deserted as many residents traditionally go on vacation.” 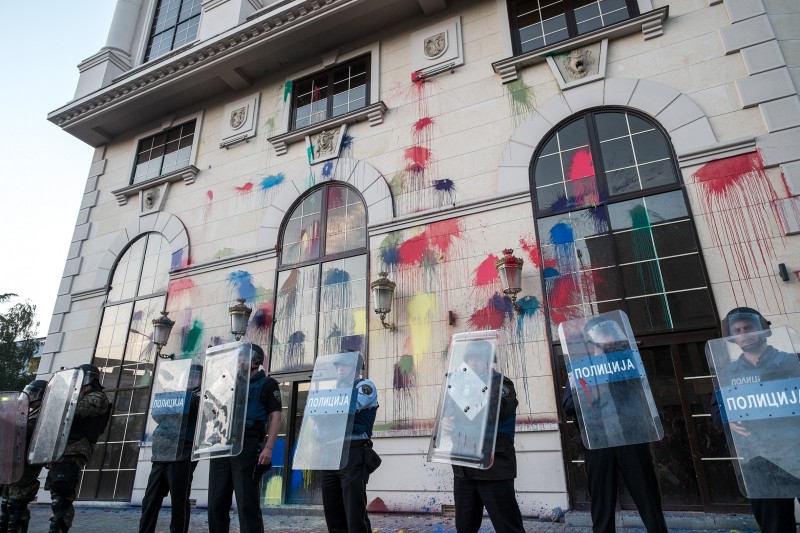 The facade of the new Agency for Audio and Audiovisual Services in Skopje on April 22. Photo by Vančo Džambaski, CC BY-NC-SA.

On Saturday, April 23, the protest started in front of the Public Prosecutor’s Office as usual, but the demonstrators soon headed to the Constitutional Court building.

A police cordon stopped them midway at the bottleneck of Goce Delchev Bridge. Unable to reach their target the protesters chose to redecorate the statues of bronze lions placed on the bridge in 2010. 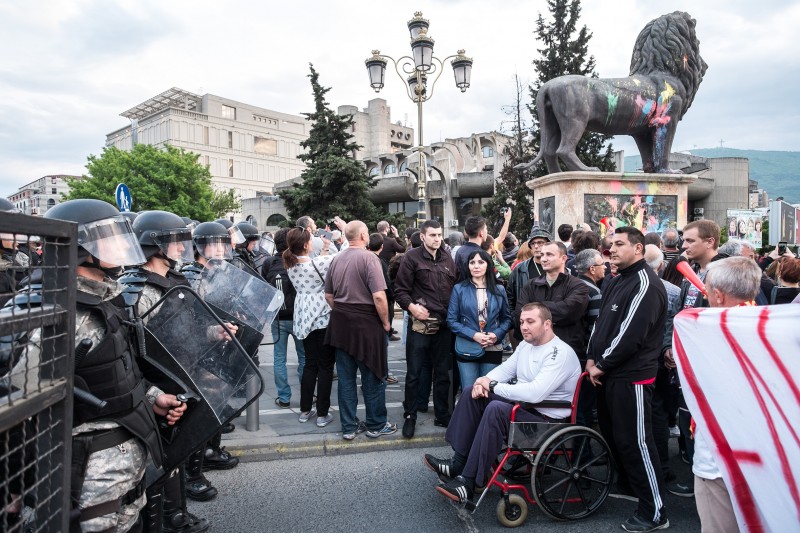 Police and ‘Color Revolution’ Protesters facing each other in Skopje on April 23, 2016. Photo by Vančo Džambaski CC BY-NC-SA.

During this protest, citizens of Skopje also held mirrors to the faces of the policemen blocking their way.

The protest ended with demonstrators standing in front of the Government for a further hour.

In other cities, the protest movement continues. Traditionally quiet provincial Tetovo is expecting its first protest on Tuesday, while protests in Bitola and Strumica have been going strong for days.