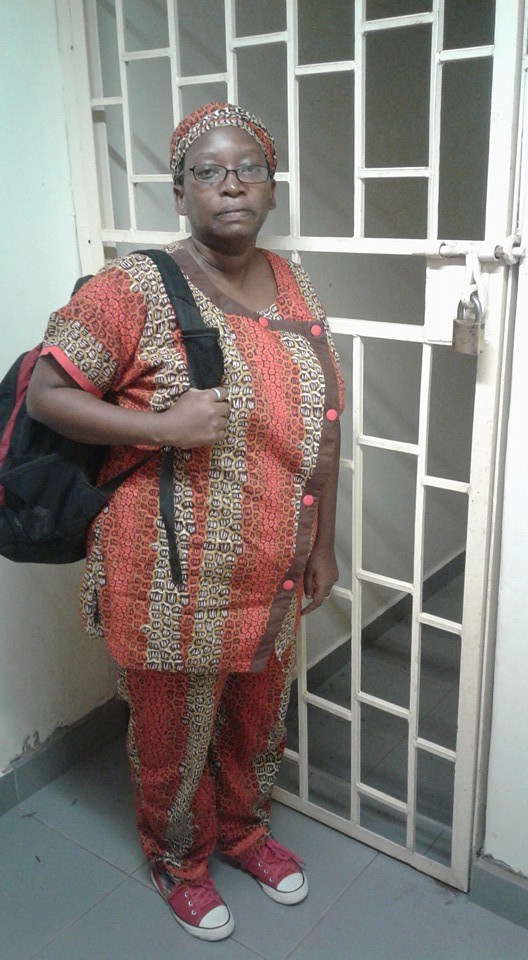 Dr. Stella Nyanzi outside her locked office. Photo posted on her Facebook page.

On April 18 Dr. Stella Nyanzi,  a research fellow at the Makerere Institute of Social Research (MISR), stripped naked to get her office back. After undressing, she took pictures and a video clip, which she posted on her Facebook wall.

Professor Mahamood Mamdani, the head of the institute, said that he locked Dr. Nyanzi out of her office because she refused to teach a doctor of philosophy (PhD) class at the institute.

Nyanzi claims that teaching was not part of her responsibilities.

She first used her Facebook page to ask Professor Mamdani to open her office. Three days later, she took matters in her own hands, and early on April 18, she undressed in front of her office. This act prompted the university officials to hand her back her keys.

However, Makerere University subsequently suspended her pending an investigation.

This is the second nude protest in Uganda in a space of two years.

In April 2015, the Daily Monitor reported an incident wherein women from northern Uganda stripped naked to protest what they claimed was a land grab in the area where they lived.

For some communities in Uganda, stripping in public is believed to invoke a curse on one's enemy.

Justifying her act, which she called a “sexual mode of expression“, Dr. Nyanzi wrote on her Facebook page:

The weapons of the powerless never make sense to the powerful. You can laugh at and mock me for using my nudity against the illegal eviction from my office, but it was the only weapon I had in my battle against Mahmood Mamdani's insubordination to the DVC [Deputy Vice Chancellor] who asked him to [cancel] the eviction. I am fighting to the death against the oppression and ‪#‎RotAtMISR‬.

With all due respect to Dr. Stella Nyanzi, she's starting to look very desperate and mad.

It is sad that some pple r cheering #StellaNyanzi on.The woman is in need of help.Her actions are worryingly a depiction of her mental state

But Allan Ssenyonga, a Ugandan journalist based in Rwanda, scoffed at the hypocrisy:

Women in Northern Uganda undress coz govt is grabbing their land = Yes!

Stella Nyanzi undresses in protest = She is mad

And Joshua Mali, a former BBC reporter, ridiculed a growing number of people who claimed that what Nyanzi did was a violation of traditional African culture.

Interesting how a society that barely wore clothes just over a few 100 years ago now claims nudity is against their culture! #StellaNyanzi

Our society really needs to stop objectifying women!We need to understand them through the lens of intellectualism not sexism.#RotAtMISR

Among the hashtags associated with the incident, one highlights the apparent degeneration of the once-respected Makerere Institute of Social Research (#RotAtMISR), while another expresses support for Prof. Mamdani in his face off with Nyanzi (#IStandWithMamdani).

The battle lines have been drawn. Two camps are established. #IStandWithMamdani versus #RotAtMISR aka #StellaNyanzi. Goliath vs David.