Japan Battles to Care for 100,000 Kumamoto Residents Displaced By Quake 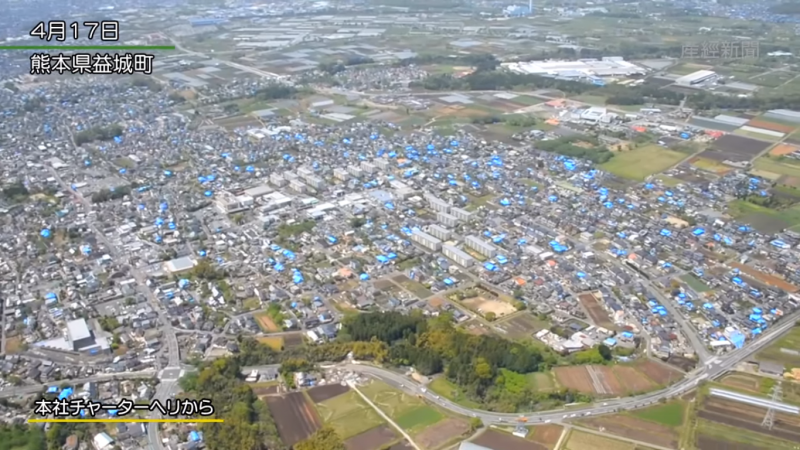 Aerial view of earthquake damage across Kumamoto Prefecture, Japan. In this image from April 17, blue tarps are used to cover roofs damaged by earthquakes on April 14, 15 and 16. Record-breaking torrential rains followed the earthquakes. Screencap from Sankei News official YouTube channel.

In the days immediately following the Japanese quakes on April 15 and 16, at least 117,000 people in Kumamoto Prefecture evacuated their damaged homes as the region was rattled by at least 600 aftershocks.

Later in the week heavy rains and fears of landslides forced search activities for possible survivors to be called off. Local news outlet Kumamoto Nichinich Shimbun reported April 22 that more than 290,000 people have been ordered to evacuate from the townships of Mashiki and Minami Aso to the east of Kumamoto City.

Throughout Kumamoto Prefecture water mains are broken, and collapsed buildings and damaged roads made initial delivery of relief supplies difficult.

In the days following the quakes there were some reports of residents in different parts of Kumamoto Prefecture pleading for water.

One photo captured the plight of Kumamoto residents following the massive quakes.

However, as time went on, relief supplies started to reach the stricken areas providing a “good news” follow-up:

[Words written on playing field] Thanks for the water! We'll keep on truckin'!

[Kumamoto Earthquake; Photo credit: Sugakawa Kotowari] Konan Elementary School, where residents a few days ago asked for drinking water. Today they have written a message of thanks. See the latest photos of the quake aftermath here:  http://mainichi.jp/graphs/20160421/hpj/00m/040/001000g/1

Having exchanged information with local governments, nonprofit organisations, and community members, the team found the situation to be severe, with relief efforts being hampered by heavy traffic, impassable roads, and continuing aftershocks […]

[…] Emergency supplies are arriving from around the country, but are still slow to reach survivors in some parts. There are challenges in sorting through and distributing supplies due to overstretched resources and damaged infrastructure. A government official said that they are having to throw away some food supplies (e.g. bread/rice balls) which are passed their expiration dates […]

[…] There are growing concerns over negative health impacts and sickness in emergency shelters, especially for the elderly and other vulnerable evacuees. Yahoo News reports that in addition to the 48 fatalities from the earthquakes, there have been 11 disaster-related fatalities in the post-disaster phase.

In the first chaotic week after the earthquake there has not been enough covered shelter for evacuees. For the first few nights many slept in the open in outdoor basketball courts and on playing fields.

But, as it began to rain later in the week, many evacuees decided to sleep in their cars, leading to the danger of “economy-class syndrome,” or blood clots and embolisms from remaining in one position for too long.

The Japanese Coast Guard has launched relief operations at ports throughout Kumamoto Prefecture:

On April 23 the Japanese Coast Guard will perform relief activities to provide water, power and hot bath to those affected by the disaster. The times are as follows:

Please be advised because of high demand not everyone may be able to take a bath at these locations.

Japan's Ministry of Land, Infrastructure and Transportation (MLIT) used drones to capture video footage of the scale of the destruction.

This footage in and around Kumamoto City and the township of Mashiki to the east demonstrates how widespread the damage was, and why so many people have been forced to evacuate:

Drone footage also shows extensive damage in the municipality of Minami Aso, a rural area to the east of Kumamoto City that has been cut off from help by landslides.

The drone footage shows toppled houses and visible fault lines that were active during the massive earthquake series last week:

While the heavily damaged communities of Kumamoto Prefecture have dominated news coverage of the disaster, some are pointing out that neighbouring Oita Prefecture was also affected by the massive earthquake.

Writing on blogging site Spotlight, user Ichigo Ichie (苺いちえ) has compiled a report on the status of relief efforts in Oita that includes the following Tweets:

Please don't forget us. Yufuin [in mountainous western Oita Prefecture] is also running out of relief supplies. My grandmother's house in Yufuin is half-demolished and she can no longer live there.

Just remember that it's not just Kumamoto [that's been affected by this quake].

[I have taken this from the April 21 edition of the Asahi Newspaper]
The status of all of the municipalities [where damage has occurred] in Kumamoto Prefecture is clearly identified. Oita Prefecture is just called “Oita Prefecture.” Isn't this treatment a little shabby? You would think that it's only Kumamoto that's been affected. It's enough to make you angry.

The hundreds of thousands of people evacuated from their homes because of ongoing and powerful aftershocks and the threat of flooding and landslides must continue to live with uncertainty.

There are some efforts to provide some psychological relief:

I saw this on TV, but the English Department did this one really nice thing, lol.