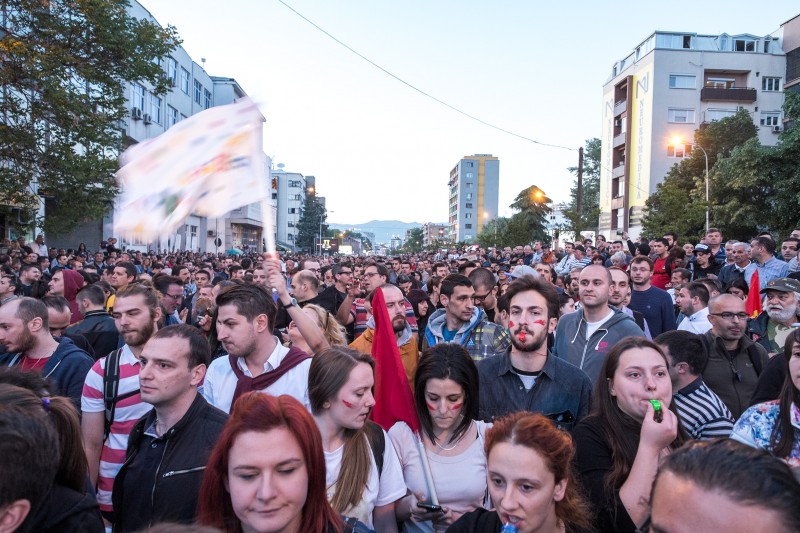 Streets in several Macedonian cities swarmed with people during the tenth day of protests in reaction to a pardon extended to a number of politicians and businessmen suspected of corruption, electoral fraud and other abuses of power.

President Gjorge Ivanov announced the pardon on April 12. Since then, protesters from the #протестирам or “I protest” citizen movement have been gathering every day at 6 pm in front of the offices of the Special Public Prosecutor's Office created to investigate the alleged crimes, which arose from wiretaps leaked to the public hit Macedonia almost a year ago.

The protests, which at the beginning included several incidents of violence and clashes with the police, have since regained their peaceful character. In addition to using the #протестирам or “I protest” name, during the past two days protests have took on the name #ШаренаРеволуција or “Colorful Revolution,” a result of protesters pelting different monuments and structures from the controversial development project Skopje 2014 with balloons filled with paint.

The name, which circulated on Twitter, seems to have been readily accepted by participants. Many arrived at the protests with colorful T-shirts, banners, face paint and other items. 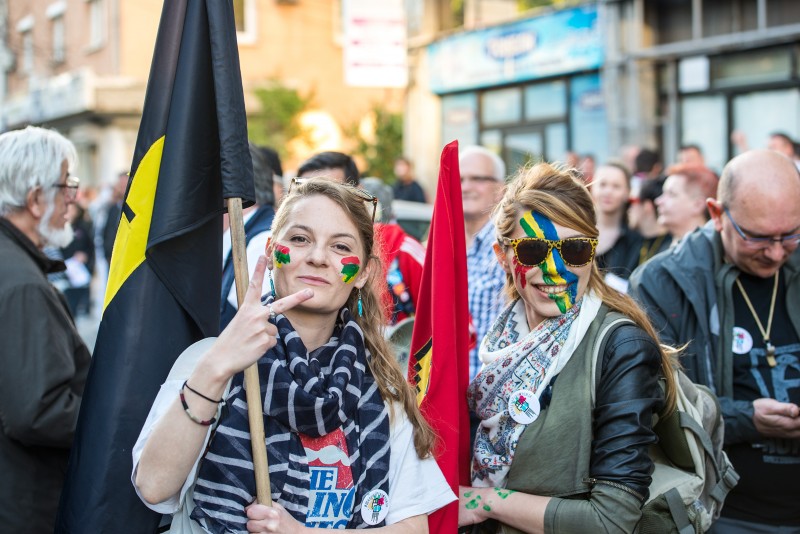 On the tenth day of protests on April 21, the streets of the capital Skopje filled with largest number of protesters so far. They were accompanied by a heavy police presence. According to organizers’ estimates, more than 20,000 people joined the rally. The rise in support for the protests came after the announcement that European Union-brokered crisis negotiations were canceled and the EU was threatening sanctions over the situation (Macedonia is a candidate for EU membership).

Similar to other days, the protest began in front of the Special Public Prosecutor's Office at 6 pm and then continued in front of the EU InfoCentre, part of the EU Delegation to Macedonia, where police stopped protesters. After a short address by student and activist Dolores Popovikj, protesters moved towards the government building, where they threw balloons with paint towards the government, left colorful hand-prints on the street and traffic signs, and spilled buckets with paint on the ground. 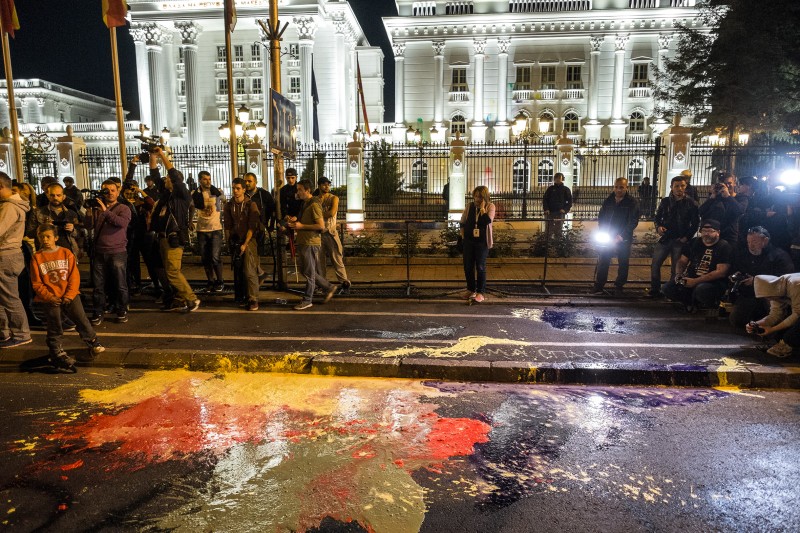 Parallel to the “Colorful Revolution” protests, the Citizen Movement for Defense of Macedonia (GDOM) which supports the right-wing ruling party, VMRO-DPMNE, held their counter-protests before the Parliament building. Estimates in local media put attendance around 15,000, though GDOM themselves claimed they had gathered up to 60,000 supporters. Anti-pardon protesters said many counter-protesters were brought to the capital from other cities, and some Twitter users reported numerous buses parked alongside Skopje’s main streets.

Demonstrators demanded that parliamentary elections be held on June 5 as scheduled. The country's political opposition, many civil society organisations and members of the European Union oppose this, arguing there's no guarantee that the vote would be free or fair and that more reforms are needed.

One of the speakers at the counter-protest, Aleksandar Pandov, publicly asked for constitutional amendments to be made “banning the work of civil organisations and political parties that are destroying Macedonia.” Counter-protesters held anti-NATO and anti-EU slogans and banners, and said they were defending Macedonia from a conspiracy instigated by ‘the West.’

What is a dictatorship? I ask in the name of North Korea.
GDOM with demand that the Constitutional Court temporarily halt the nongovernmental sector.

Another GDOM speaker, Aleksandar Daštevski, whom the ruling party appointed as member of the state Commission for Protection from Discrimination, claimed the movement had the support of “true” Macedonians, while the protests against the president's pardon are supposedly inflated by foreigners — in reference to Greeks and Serbs, specifically — and “foreign and domestic mercenaries.”

Some of the banners at the counter-protests reflected the influence of government officials, like President Ivanov's accusation that NATO and EU ambassadors are meddling in internal affairs. Others tried to respond to messages held aloft at the “Colorful Revolution”. For instance, those protesters wrote graffiti on the Triumphal Arc with the message “your gate is ugly.” Counter-protesters had a banner (pictured below) reading “your ambassadors are ugly.”

didn't know it is a beauty contest pic.twitter.com/jQyhOE8mke

Image: “Enough Silence!” [Banner in Albanian, Macedonian, Turkish and Roma language from the April 21 protest in the multi-ethnic city of Gostivar.]

Image: “I protest = I exist!” [Sign in Albanian held by elderly woman in Gostivar]