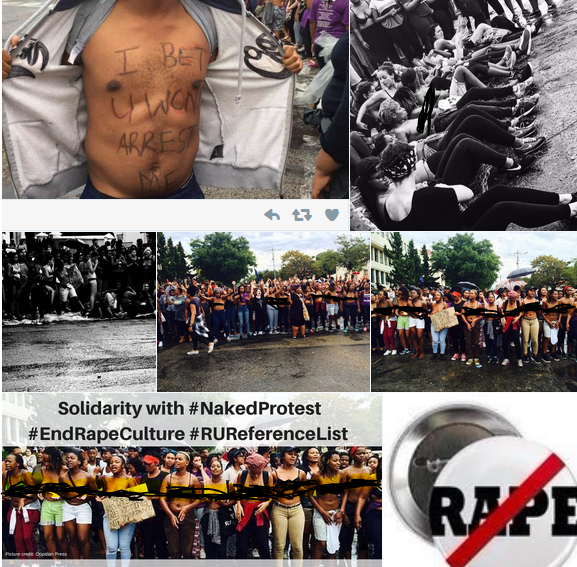 A screenshot of images of Rhodes University protesters posted on Twitter.

Topless students at Rhodes University (RU) in Grahamstown, South Africa, are protesting against the university's sexual assault policies. All academic activity have been suspended [1] indefinitely due to the demonstrations.

The protest was triggered by a list called the “RU Reference List” posted on social media to name and shame [2]11 alleged rapists at the university. Protesters and their supporters are tweeting under the hashtags such as #NakedProtest [3], #RUReferenceList [4] and #RapeCulture [5]. The students had threatened to shut down the university if their demands of reforming the university’s rape policy, changing the definition of rape, removing the burden of proof from victims, mandatory sensitive training for staff and suspending the 11 alleged rapists are not met.

Other demands are [6] that the university proctors, Gordon Barker and Sarah Driver, step down, a task force be set up to investigate sexual assaults, a ban against sexual assault offenders running for Student Representative Council be established, and students receive immunity from disciplinary action for protesting.

The students also claim that [7] the current sexual policy at the university requires victims to prove that their perpetrators intended to rape them and that there is only one Harassment Officer to deal with all cases of abuse and assault.

Police used teargas and stun grenades against the protesters and arrested three students. [8] One student was taken to hospital after suffering from a panic.

Reacting to police actions against the students, Saya Pierce-Jones wrote:

:””(
“Mommy, they are shooting us because we don't want to get raped anymore”#RUReferenceList [4]#RhodesShutDown [9] pic.twitter.com/cgoOiUqtfd [10]

The university has set up several task teams and will review existing policy on rape, according to Rhodes University Vice Chancellor Sizwe Mabizela [12].

The so-called “RU Reference List” that inspired the protests fueled debate on how universities treat rape and sexual assault. Protesters and their supporters argued that the sharing of the list was a result of the university failing to take rape seriously, and the demonstrations are necessary to force change.

But the list and the resulting protests have earned some pushback around South Africa, who dismissed the legitimacy of women's complaints or felt all men were being blamed for rape.

Sad thing about #RUreferencelist [13] , is that innocent man will suffer humiliation as a result of a few scornful women.

The Rhodes University #NakedProtest [15] was intended for good..but why are all man projected as rapists whenever women get raped

Some Twitter users have come to the defense of the protesting nude students after some South Africans criticised them for indecency.

Saddened by some responses to #NakedProtest [15]. People talking about “indecency” and such. Where are you when indecency of rape needs policing?

Some men are all about receiving nudes but cringe when women own their bodies for a cause of their own. We see you.#nakedprotest [18]

why does a woman willingly showing her skin offend you, but violence committed against her doesn't? #nakedprotest [18]

And another user wondered:

South African Law is funny… how can #NakedProtest [15] = indecency, yet anyone in traditional attire is not, police are bored

Rhodes University students are a part of a growing trend of student-led mass protests [25] in South Africa in recent months. These protests are usually organised using social media tools. Other movements include #RhodesMustFall [26], #FeesMustFall [27] and #AfrikaansMustFall [28].